Max Goldberg/CS47, Currency, From The Magazine 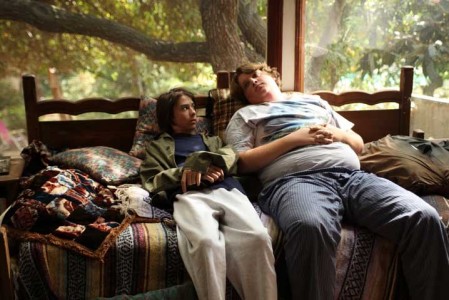 Azazel Jacobs’s fourth and most polished feature to date grants its eponymous hero (Jacob Wysocki) a surprising foundation of confidence—surprising because he’s a husky adolescent boy who wears pajamas to school. His equanimity is clear from the moment we see him cutting through a dry creek bed with the stride of a gentle giant (we later see him reading Gulliver’s Travels). This unstudied nonchalance immediately deflects the audience’s instinctive snickering at a big kid in his PJs. Indeed, Terri’s assuredness tempers all manner of high school comedy formulas. When an asshole gym teacher—one of the film’s few uncooked caricatures—tries to embarrass him by asking how he feels about physical education, Terri replies Buddha-like, “The feeling is…no feeling.” When sad and lovely Heather (Olivia Crocicchia) suggests they take pills to feel nice one decadent evening, he says softly, “I already feel nice.”

Such quiescence is rare in an adolescent and rarer still in contemporary American comedy. “Real kindness is an exchange with essentially unpredictable consequences,” write Adam Phillips and Barbara Taylor in their book On Kindness. “It is a risk precisely because it mingles our needs and desires with the needs and desires of others…” Given this, it’s unsurprising that kindness would be an empty sign for the majority of comedies, the object of vague aspiration or outright hostility. A true story about kindness, following Phillips and Taylor’s definition, would be one in which a character’s moral progress is not hitched to resolution or even the emotional clarity of “doing the right thing.” That’s the task Terri sets itself. Its portrait of an emotionally intelligent adolescent certainly represents a departure from Apatowian conceits of the stunted boy-man, a personality type brilliantly excoriated in Jacobs’ Momma’s Man (2008). Terri is not a frustrated artist figure, nor is he swaddled in pop culture. The film has an honourable faith in the reality of its characters, endowing each member of its small cast with credible imperfections and flashes of self-consciousness. There is no jeering chorus of friends, no cameos for comic juice. The general absence of women is a source of difficulty and confusion, not the prerequisite for a smooth ride from raunchiness to redemption (one might also note that “Terri” is not a gendered name, and mostly leans to the feminine).

All of this makes Terri refreshing. What makes it good is the solidity of the scenes, something that owes both to novelist Patrick deWitt’s honed scripting and the naturalistic cadence of Jacobs’ direction. The script rates a half dozen references to Terri’s taste for beans on toast to only one inconclusive mention of his absent parents, and the direction is similarly measured. The first time we get a full view of the windowed den in the house Terri shares with his half gone Uncle James (The Office’s Creed Bratton) comes when a visitor first arrives nearly halfway through the film. It’s a slight but deliberate calibration, one that subtly reveals the insularity of Terri’s world.

As with Jacobs’ previous two features, a congested living space gives density to the narrative’s gaps. The airy ruin of books, records, and ‘70s furniture all indicate Uncle James’ lost life of the mind, lending an extra degree of melancholy to his diminished condition and setting up one of the film’s finest passages. Terri comes home to prepare for a visit from Heather, and he finds James unexpectedly lucid, sitting in his chair writing. “No rhyme or reason to it,” James explains, before excusing himself to take advantage of the momentary clearing. A brief sequence cut somewhat nervously to match Terri’s energy shows the teenager busying himself with chores and then lingering in the kitchen with his uncle’s pills. He knows the drugs will muddy James’ brain, but he wants the place to himself. He gives him the pills—in bad conscience surely, but there’s a tenderness that clings to his misdeed. We’re watching him begin to understand the gravity of personal decisions.

Terri’s primary guide to the “no rhyme or reason” of adulthood is Mr. Fitzgerald (John C. Reilly), the assistant principal of the school. Fitzgerald schedules regular meetings with goodhearted outliers like Terri, trying a little too hard to act the part of the cool guidance counselor, but in such a way that he only ends up seeming more sincere for it. Reilly carries this off well, voicing several iterations of the character’s more or less self-conscious performances of his authority role. The concreteness of the office and adjoining waiting room as well as the patient pacing of his talks with Terri call to mind the great tête-à-têtes of Wiseman’s High School (1968), with the key difference that in the fiction student and disciplinarian can meet as equals.

Terri accepts Fitzgerald’s malt balls and alarming “dude”s, but he’s too canny to be taken in by the administrator’s muzzier inspirationals. When Fitzgerald makes a big flourish of showing Terri an old photograph of himself as an acne-ridden teenager, Terri eviscerates the hopeful clichés which follow: “Mr. Fitzgerald…I’m treated like a monster because that’s what I am to them.” Contrary to some of Reilly’s previous drowning victims, however, Fitzgerald has the wherewithal to recover. In this scene and others, we see him retreat from the hackneyed mentor spiel and regain his underlying honesty with Terri. It allows them to become friends.

Things prove more complicated with Terri’s peers. Chad (Bridger Zadina) is introduced as a cliché: swimming in his army jacket, plucking out hairs in close-up. We imagine a whole cabinet of prescription drugs. Fitzgerald plainly doesn’t know what to do with him, though the two complementarily reflect Terri’s reticence. Then there’s fetching Heather, who gets fingered by Dirty Zach (the nickname obviously preceding this incident) in home economics. We watch the scene unfold from Terri’s POV across the classroom, the distant perspective balancing his curiosity with the sadness of the reality. “Oh my God,” Terri groans behind a ridiculous shield of cooking supplies. Eventually his cook-mates follow his gaze and a moment later the whole class knows. Heather’s shaming is a primal scene for the high school comedy, and the sympathetic bond that develops between her and Terri is equally familiar. Bound as outcasts, they begin passing notes—so far, so Hughes.

But deWitt’s script follows through on Mr. Fitzgerald’s humble insight as to the unavoidably imperfect nature of actual relationships, leading up to a remarkable protracted scene in the shed next to Terri’s house. Terri’s initial exasperation with Chad for butting in on his date with Heather slides into something more unpredictable when the three start knocking back whiskeys and pills. The intoxicants register realistically, relaxing inhibition, slopping up insecurities, and generally making time sticky. Jacobs excels at this sort of drift (see the “Damaged Goods” coda of 2005’s The GoodTimesKid), but the dramatic focus here is something new. Chad is dying for something to happen; Heather just wants to feel wanted; Terri isn’t sure. These volatile, raw feelings shift every few beats, but the young actors stay with it. When Terri and Heather start giggling on the sweet numbness of the pills, Chad moves to kill the good vibes: his negative energy will not yield. A genuinely dangerous gulf opens after he’s been humiliated. We wait for his reaction, imagining the film spinning off in a dozen different directions—and the night is still young. The scene plays like a dissolute variation of Jim, Judy, and Plato’s game of make-believe in Rebel Without a Cause (1955).

The morning after, Terri finds Fitzgerald sleeping in his car after another fight with his wife. They go into the school to eat and shoot hoops, and then Terri walks home along the same wooded creek bed. A bobbing handheld camera accents his graceful step; the low angle makes him look a couple of heads taller and admits an extra measure of warm sunlight. The camera stops in some tall grass, letting him go on. It’s an affectionate, almost parental gesture, all the more poignant for arriving as a grace note. Terri doesn’t need anything more.

Posted in CS47, Currency, From The Magazine