Scott Foundas/CS45, Currency, From The Magazine 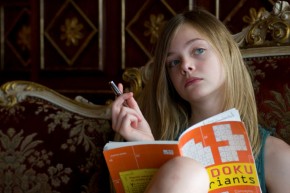 Literally speaking, the “somewhere” of Sofia Coppola’s newly minted Golden Lion winner is the Chateau Marmont—that hilltop monolith of celebrity decadence, modelled loosely on an 11th-century Loire Valley estate, staring down upon Sunset Boulevard along with the ghosts of the many (Garbo, Belushi, Dean) who lived, died, or at least partied hardy there. In figurative terms, the true locus of Coppola’s film is the dislocating torpor of high-end celebrity living, as exemplified by the film’s summary image (replicated on all marketing materials) of stars Stephen Dorff and Elle Fanning tanning beneath the unchanging Southern California sun, one day bleeding effortlessly into the next, resplendent in their pseudo-Antonioni ennui. Welcome to the Hotel California, indeed.

In Coppola’s rendering, Johnny Marco is one of the Chateau’s living spectres, a Hollywood superstar whose latest action blockbuster (called Berlin Agenda) is about to go into worldwide release. Although, with one Stephen Dorff (who hasn’t top-lined a major studio release since Mike Figgis’ misbegotten Cold Creek Manor nearly a decade ago) in the role, it’s easy to keep mistaking the character for a B-list has-been—which, intentionally or not, only underscores the film’s sense of the fleeting nature of celebrity currency. A dispassionate voyeur to his own privileged existence, Marco spends a lot of Somewhere watching his life flicker by like one of his own movies, most amusingly in two long scenes of twin blonde pole dancers (who come equipped with their own portable poles) performing for him in his Chateau suite. (Instead of being aroused, he falls asleep.) Later, he watches with much the same narcotized gaze as his poised pre-teen daughter, Cleo (Fanning), performs an extended routine during an ice-skating lesson. What exactly Coppola may be trying to say by conflating the two images remains, like much of Somewhere, rather mysterious, but it sticks in the mind nevertheless. So does the opening scene of Marco driving his Ferrari in circles somewhere in the California desert—an unbroken take that, at a full three minutes, can’t help but seem a tip of the hat to Vincent Gallo’s drive across the Bonneville salt flats in The Brown Bunny (2003).

This, of course, isn’t the first time Coppola has turned her attention to the lives of the rich and famous, but if her three features made from her original screenplays (Lost in Translation, 2003; Marie Antoinette, 2006; and now this) are all variations on a theme, Somewhere in many ways feels like one particularly from the heart. Born in 1971, the youngest child of the Coppola clan, Sofia was coming of age just as papa Francis’ Zoetrope empire was starting to crumble—the bankruptcies, the repossessions, and the long run of directorial jobs-for-hire to stave off the creditors. While Somewhere is more about the existential lows of the high life than the fiscal ones, it’s plenty easy to imagine wise, mature Cleo as an avatar of the adolescent Sofia, gazing quizzically upon business as usual inside the dream factory. While familiar, many of the film’s details are slyly observed: the drunken parties full of Westian locusts drawn to the flame; the press junkets with their overly caffeinated studio wranglers and gauntlets of foreign journalists trying to play the local angle. (“How do you think this role represents Italian-Americans?” followed by the coup de grâce: “Who is Johnny Marco?”)

The latter is a question that seems to weigh—albeit not too heavily—on Marco’s shoulders, at least in those quiet moments when he isn’t dodging paparazzi, posing for photos with a jilted co-star, or being propositioned for sex by just about every woman (and at least one man) who crosses his path. In one central set-piece, Marco sits for a latex molding of his face, literally “disappearing into character” and emerging several hours later looking like a very old man—in Hollywood terms, a fate worse than death. This much we know: Marco is a broken man—literally, as evidenced by the cast on an arm injured doing movie stuntwork—and something less than an ideal parent. When Cleo’s mom abruptly drops her off for an extended summer stay, saying “I just need a little time,” the tone of the movie shifts slightly from Professione: Actor to a Paper Moon (1973) of the privileged class, with father and daughter bonding while navigating the gauntlet of the global publicity tour. Off to Italy they go for an ersatz awards ceremony, while cooling their heels in a hotel suite that makes the Chateau look like a Days Inn, complete with apartment-sized swimming pool. Before he drops her off at summer camp, they detour through Sin City (and, just for good measure, hop a ride on a private helicopter). Love and understanding, alas, remain elusive.

If I seem more than a bit noncommittal about Somewhere, it’s because even after two viewings, the film strikes me as a tabula rasa that absorbs whatever you choose to project on to it and reflects back almost nothing. Is Somewhere a perceptive study in vacuousness, or merely a vacuous movie? Is Dorff delivering a master class in Kuleshovian inexpressiveness, or is he simply a comatose screen presence?  Does Coppola want to eat the rich or merely to eat with them? The answer, I think, is all and none of the above. What did nearly infuriate me upon a first viewing was the sense that Coppola (whose previous films I admired) had fatally stepped outside of herself to make a “Sofia Coppola-type movie,” a capital-A (or capital-H?) hipster art film replete with distended scenes of nothing much happening, one pointless celebrity cameo (Benicio del Toro), and an indie-radio-ready musical score courtesy of the French alt-rock band Phoenix (whose leader, Thomas Mars, fathered her second child). Everything that had heretofore felt casual and effortless about Coppola’s work seemed, here, to be pre-meditated within an inch of its life.

Upon reflection (and a second viewing), I still find a certain self-conscious quality in Somewhere. (The thudding symbolism of the broken arm, the face mask, et al. don’t help.) But the film’s virtues are many, not least of them the preternaturally assured Fanning, who has a wonderful, wide-eyed gaze, and makes marvellous business out of something as banal as making eggs Benedict. Some of my initial hostility towards the film may actually have stemmed from just how acutely Coppola distills certain unpleasant realities about the culture of movies and movie people, and of a city where it is possible to be deeply “plugged in” and still feel profoundly alone—qualities not near the top of my list when people ask me what I miss about living in Los Angeles. So Somewhere is far from great, and yet it’s impossible to get out of my head—its melancholic yearning for some intangible loss (identity, childhood), its gentle tearing at the narrative conventions of American indie cinema (within the context of a movie more than a few thousand people might actually see). I applaud it for its small triumphs and quiet acts of resistance.

Posted in CS45, Currency, From The Magazine