Road to Nowhere (Monte Hellman, US) 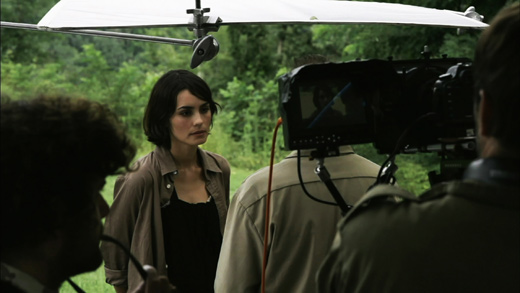 A couple of months ago, I watched Monte Hellman’s Two-Lane Blacktop (1971) on TV. The film is marvellous for more than one reason (not just great, but truly marvellous). Among other things, it’s a correction of Easy Rider (1969), the juvenile blockbuster made a couple of years earlier. The proof that things are wrong in the world is that Easy Rider made a strong impact on the culture while Two-Lane Blacktop remains a cult film about roads, cars, diners, girls, clothes, freedom, and Warren Oates. It’s also a film where the last shot fakes a celluloid frame burning, as used to happen in old movie theatres. Both things together show a filmmaker interested in the material side of cinema, to the point where plot and acting are much less relevant than presence, physicality, and space. There is also an obsession in Hellman’s work about the limits of filmmaking, the ontological boundaries that separate film from the world (in this case, the burned frame is at the same time solid as an object and a symbol of the frailty of the movie). In any case, Hellman does not make films that try to copy reality or represent facts that have taken place elsewhere, but films that are as physical evidence in themselves, as only the medium allows. The question of what is cinema remains of course open, but in Road to Nowhere Hellman gives another hint of an answer.

I saw Road to Nowhere at the Viennale last October and had to watch it a second time recently because the plot is hard to follow, so bear with me. It’s a film about a film made from a “true story,” so there are at least two films to watch. One (let’s call it Film 1) is about some Velma Duran, a femme fatale involved in a criminal plot that ended in her death. There is a Film 2, the film being made about the shooting of Film 1, where the actress that plays Velma Duran in Film 1 is called Laurel Graham (and is played by Shannyn Sosssamon), the director is called Mitchell Haven (Tygh Runyan), and the scriptwriter is called Steven Gates (the last two names are very similar to those of Monte Hellman and his long-time collaborator Steve Gaydos). When the film starts we see a DVD being inserted into a laptop, then the opening credits: “Road to Nowhere, a picture by Mitchell Haven.” This may or may not be Film 1, and should not be confused with “Road to Nowhere, a picture by Monte Hellman,” maybe our Film 2. But Film 2 is not only about the making of Film 1, it also incorporates the infatuation of director Haven with actress Graham, and a very complicated criminal twist of its own. [SPOILER ALERT] It appears that Laurel Graham not only plays Velma Duran, but is the real Velma Duran—she didn’t die as thought, and has been asked to re-enact a version of her own life. So, while in Film 1 Graham plays Duran, in Film 2 Duran plays Graham playing Duran.

But there are other connections. Haven is a younger version of the now 77-year-old Hellman, and what’s going on between filmmaker and actress is based on what happened between Hellman and Laurie Bird, the female star of Two-Lane Blacktop, vaguely to do with some Film 3, in a relationship somehow parallel to the one Film 1 has to the original “true story” (the last line in the credits of Road to Nowhere says “This is a true story”). There is a wonderful scene in Film 2 where the female blogger that researched the original crime is about to have sex with an insurance investigator who’s after the unmasking of Duran/Graham. She says, “Let’s play a game, which is called ‘fuck the facts,’” and she jumps on the man lying on the floor. So facts, Hellman appears to say, should not be trusted very much: autobiographical traces or criminal stories in the newspapers are as fictional as Film 1, Film 2, or whatever film you want to bring in here. So, what counts in a film? Maybe casting, casting, and casting, as Haven says, or making characters become the actors and not the other way around, as Hellman said in a conversation with Gaydos for the French press book. Or maybe something else, like leaving loose ends, not trying to make sense of everything because, in that case, to quote Haven again, “Who would be interested?” Or something even more important: shooting desire in infinite ways, making it present in every frame.

Let’s pause for a minute and think. Suppose you watch a scene in a film, let’s say a dialogue scene between two actors. Then there’s a cut or a camera movement and you see the crew and the camera shooting that scene. This has been done a million times. But in Road to Nowhere, the crew that is shooting (or pretending to shoot) Film 1 is shot by the crew and the camera that is shooting Film 2: this is something you usually don’t see. You could think of a second cut and a second crew, shot in turn by a third crew. What makes Road to Nowhere a really disturbing film (besides being very fun and intriguing to watch) is that two seemingly opposite things happen at the same time. On one side, there are moments where it’s hard or even impossible to tell Film 1 from Film 2. The other is even more spooky: given a scene, you start to fear that what you’re seeing is a ghost of a film, and that at any moment it will be revealed that there is another crew shooting it. So the existence of a film in a film leads to a Russian doll situation (which the French more properly call mise en abyme because of the potentially infinite side to the situation), which creates that ghost that you see when a camera shoots a TV set which is playing what the camera shoots. That logical or ontological ghost—whatever you want to call it—is all over Road to Nowhere, and the confusion about the nature of every shot leads also to this endless chain of cameras and crews shooting each other, creating the illusion of an illusion of an illusion… It may be concluded that the famous suspension of disbelief is finally impossible once you come to realize that everything can be part of a set, and the same goes for the making of the set and so on. Actually, there is no film that exists without a camera filming whatever is happening, but films are made with the pretense of ignoring the camera and that you are watching “the facts,” but also fearing that there would always be a film n+1 behind a given film n. This is the true principle of horror in film, and Road to Nowhere is among other things a horror film.

But Hellman makes a very powerful and yet mysterious statement about this issue, one as mysterious as the burning of the frame in Two-Lane Blacktop. [SPOILER ALERT] Near the end of Road to Nowhere there is a scene in a room where two people are killed and Haven survives. It’s supposed to be part of Film 2. After the murders, he takes a camera that’s lying around (Road to Nowhere was shot with several small Canon 5D Mark II cameras originally designed for still photography), and in one of the more dramatic moments I’ve ever seen in a film, he raises it and aims it at the camera that’s been shooting him which has remained hidden until now: we see him pointing the camera right into our eyes. And then there is a cut to what he has shot: the ghostly presence of the crew shooting Film 2, which was hidden in the room and we have not seen so far. The gesture is one of desperation, as if Haven is burning the convention, breaking the taboo in rebellion to the status of the character: he is striking back, trying to get rid of his slavery in relation to the hiding camera. It’s a true horror moment, much more powerful on its own than revealing some obscure plot point, because it means disclosing the secret of the process of moviemaking with a true tone of rage in the actor’s attitude. The so far gentle mood of the film turns then into tragedy while we, the children of cinema, are definitely scared by that reverse shot—one that reveals to us the true nature of Santa Claus. In the next scene, Haven is in jail and he’s telling his story to the “fuck the facts” woman while a camera is shooting him. There is no escape from cinema, that coda seems to say, even if you burn the frame or reverse the camera: and that’s the fate of the filmmaker. Hellman is back after 22 years.