No Country For Old Men

By Jessica Winter In Currency, From The Magazine 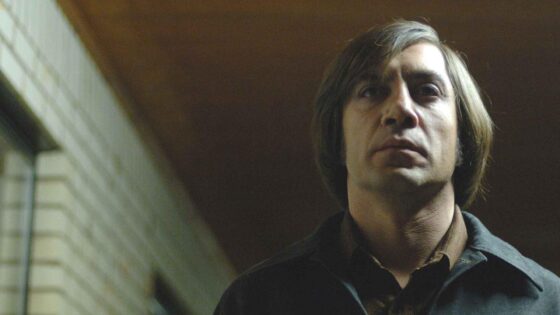 I saw No Country for Old Men twice in three days, partly because I sort of missed it the first time. The usually peaceable art-house cinema where we went for Round 1 had on this particular evening turned into a multimedia feedlot, all the punters searching through their popcorn or their gallon bags of Frito-Lays for their chirruping cell phones; one resourceful gentleman spent part of the film pouring ice cubes down his throat with one hand and BlackBerrying with the other. Then there was the curmudgeonly baritone a row ahead of us, who stank of rum and looked a lot like Don Imus, and whose commentary ran along the lines of “Just kill him already!” and “Crapola!” and outbursts of ersatz sobs. The real distraction, though, was the woman sitting next to Imus, his wife or girlfriend. She would shrink slightly away from him when he hissed wetly in her ear or knocked his skull against her shoulder, but her head never turned from the screen, and she didn’t utter a word. For entire stretches of No Country, I could not stop thinking about this woman. What was going through her mind during those two hours? And—how did she and Imus get together? Is he an alcoholic, or just a bad drunk? Would he apologize for his behaviour the next morning? Does this happen every time they go to the movies? What do they talk about at dinner, and what does she think of their sex life, and what do her friends think of him? No Country’s expertly calibrated plot mechanics and stunning border landscapes couldn’t compete with the speculative movie I was helplessly projecting onto the blank screen of a stranger, dimly glimpsed in quarter-profile.

I was still thinking about that woman when I returned to No Country a second time. Maybe it was because my chance non-encounter with her was precisely the kind of emotional immersion in a foreign psyche that the Coen brothers tend to avoid. While their renderings of stock characters are often highly affectionate—see the McDunnoughs in Raising Arizona (1987), the Gundersons in Fargo (1996), and the Dude in The Big Lebowski (1998)—they are rarely affective or empathetic. The only headspace their films delve into is that of the conjoined Coen brain trust, its neurons firing verbal and visual signals from the cinema, literature, and pop-cult history they were raised on. A Coen movie is a hermetically sealed taxidermy shop of well-worn tales and genres; one can hardly imagine any of their cloned creatures escaping in search of a life of its own. Their hyper-referential pastiche style, at turns icy and strenuously madcap, has been showing signs of strains at least since O Brother, Where Art Thou? (2000)—and so No Country for Old Men, in which they reach uncharacteristic depths of characterization and efface their natural attraction toward the glib and grotesque, is a revelation, and hopefully a turning point.

Adapting Cormac McCarthy’s 2005 novel, the filmmakers are still trafficking in archetypes: Llewellyn Moss (Josh Brolin), the young buck who stumbles on a Pandora’s box of treasure; Anton Chigurh (Javier Bardem), the quasi-human ruthless killer on Moss’ trail; and Ed Tom Bell (Tommy Lee Jones), the aging, salt-of-the-earth sheriff who’s little more than a bystander as the body count piles up across his jurisdiction. The Coens are also returning to the gore-stained, scrub-and-asphalt landscape of their neo-noir debut, Blood Simple (1984), which assembled the hard-boiled tropes of Hammett, Chandler, and Cain and relocated them to hottest Texas.

But Blood Simple was a black comedy in which the Coens delighted in tormenting their wretched schemers and double-crossers; No Country is just as brutal and fatalistic, but the brothers’ approach to the three protagonists and toward the story’s inevitably woeful conclusion is contemplative, respectful, even sombre. The camera is a sniper, lying in wait for characters before they enter the frame or tracking them silently as they calculate their steps, and yet the filmmakers regard both Bell and Moss with the inquisitive esteem that can only be granted in three dimensions: These two men may look like types, but they’re in fact where types come from. (Chigurh, meanwhile, is a force of nature: the Angel of Death in a Prince Violent haircut, carrying not a scythe but a pneumatic cattle gun.) Reining in some of their usual proclivities (for macabre farce and name-the-classic quotation), the Coens mute their usual allusive enthusiasms yet still reveal natural affinities: The pulsating street lights and submerged rumble of the sound design in the nocturnal driving scenes, not to mention the revolving door of bemused, glassy-eyed service-industry drones who provide Moss and Chigurh with their motel rooms and gas, are straight out of David Lynch.

It could have gone wrong. The filmmakers might have been tempted to turn Llewellyn into a bumbling sap (indeed, they cordially leave out his biggest D’oh! moment in the book), or poke fun at Bell’s Greatest Generation bloviating on how the world has gone to hell, or pick out every verbless sentence in the novel and recruit Sam Elliott to provide the intonations. (“Dull and gray above the floodplain along the east shore of the river. God’s own distance to the far side.”) No Country is the Coens’ first fully-fledged literary adaptation to reach the screen, and while it’s faithful to the book’s contours, it’s also a master seminar in line-editing. The Coens cut Bell’s fogeyish ramblings down to taciturn skin and bone (while preserving echoes of Marge Gunderson’s wounded morality in Fargo). Jones brings a puzzled decorum and, improbably, a sweetness to the role: Bell seems not to pontificate, exactly, but rather to think out loud, with the questioning cadence and light irony of a self-aware man who knows he is not articulating himself properly.

The screenwriters admittedly do stumble here and there: A suggestive dissolve before a key character’s death throws the narrative momentum off course, and a few crucial plot twists are whittled down so severely as to become subliminal. But although the Coens adore the ricocheting dialogue of ’30s screwball and ’40s noir, it turns out that their most emotionally and psychologically rich film to date is also their most laconic.

There are times when No Country almost seems the sum of its erasures: They often deny a doomed character—and perhaps, too, an audience hungry for sensation—a blaze of glory via an onscreen death. Perhaps the nimblest elision comes when Chigurh has his predestined appointment with Moss’ wife, Carla Jean (Kelly Macdonald), who has gradually emerged as the film’s linchpin. In a small but significant departure from the text, she refuses the principled psychopath’s offer to call a life-or-death coin toss, thus becoming the only character in the film to place a grain of doubt inside his insane logic. The tension in this late scene derives not from the push toward its only possible outcome, but in whether or not Carla Jean can maintain the dignity of her knowingly futile appeal, which is more to reason than to mercy. Here the Coens and Macdonald transform the hand-wringing wife, the kind of part that the phrase “thankless role” was invented for, into a figure of courage and moral clarity—attributes that might have actually served some purpose had the cosmic coin toss gone the other way. I’ve never walked out of a Coens movie before feeling like I knew someone new, or wishing I’d known her better. One could even imagine going to the movies with her, and wondering what was going on inside her head.