Midnight in Paris (Woody Allen, US)

Adam Nayman/CS47, Currency, From The Magazine 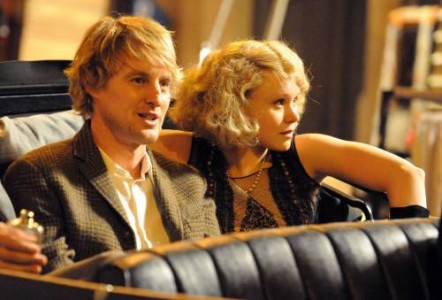 Trolling through the dispatches from Cannes, I’ve yet to read one review of Midnight in Paris that invokes La Jetée (1962). This is possibly because in a film that, pace the worst of Woody Allen, takes pains to underline its other references and homages, the nod in Chris Marker’s direction is rather understated. About three-quarters of the way through the film, crinkle-eyed American writer Gil Pender (Owen Wilson) attends a wedding party held in a salon strewn with the stuffed and mounted bodies of various wild animals. He strolls through the room with the young woman (Marion Cotillard) he’s been courting since his arrival in the city, their tentative attraction foregrounded against the frozen menagerie. The setting is straight out of the museum sequence in La Jetée, and so is the hero’s romantic dilemma. Like Marker’s ill-fated experimental volunteer, Gil is a wayward time-traveller, weighing the cost of falling in love with a woman from a bygone era.

At first, Midnight in Paris’ gently uncanny scenario, in which Gil’s circa 2010 Gallic vacation is interrupted by temporal hiccups catapulting him back to the city’s glittering past, seems pretty flimsy—the merest pretence for a string of blackout sketches. Transported each night at the stroke of midnight back to the “moveable feast” of ‘20s Paris, Gil disbelievingly consorts with Ernest Hemingway (Corey Stoll) and Scott and Zelda Fitzgerald (Tom Hiddelston and Alison Pill) and gets taken to a cocktail party featuring Cole Porter on corner piano. He shows his new manuscript to Gertrude Stein (Kathy Bates) and gets sketched by Salvador Dalí (Adrien Brody).

The celebrity cameos are amusing enough (and there’s a pretty good joke about Buñuel and The Exterminating Angel [1962]) but they’re also intended wistfully. These figures are obviously Allen’s artistic heroes, and so they’re understood to be Gil’s as well. Like John Cusack, Kenneth Branagh, and countless others before him, Wilson is playing a veiled version of his writer-director, a stammering mouthpiece-manqué who frets and fidgets and finagles his way out of suffocating social situations. Gil is thus also afflicted with Allen’s distrust of contemporary American popular culture. (Recall how CBGB’s was used as a locus of irritation and hearing loss in Hannah and Her Sisters [1986], or the smash cut to a stereotypical gangsta rapper brutally repurposing “I’m Through With Love” in Everyone Says I Love You [1998]). To make things clear: Gil’s novel, which he’s come to Paris to hotwire in between shopping excursion with his callow fiancée Inez (Rachel McAdams) is about a man who operates a “nostalgia shop.” From the sounds of it, it’s not a comedy.

The tug of war between the aesthete and the anarchist is probably the crucial throughline in Allen’s career. The guy who affectionately demolished Bergman in Love and Death (1974) is also the guy who erected a wobbly monument in the austere Swede’s image four years later in Interiors (1978). In his early New Yorker pieces, Allen did quick-hit knee-cap jobs on literary classics, both to remind his readership of his (and their own) formidable frame of reference but also to bring the highbrow low down. With this in mind, Midnight in Paris feels a lot like a piece from Without Feathers or Side Effects, a close cousin to the meta-fictional hijinks of “The Kugelmass Episode” (which anticipated Timothy Findley’s Headhunters from an inverted angle) or the non-sequitur sketches of “Notes From the Underground” (“I come upon a man at an outdoor cafe. It is André Malraux. Oddly, he thinks that I am André Malraux…this time I go along with it and get to eat his fruit cocktail”).

The contradiction, then, is that of the comic who takes solace from the canon even as he feels obligated to burst the rarified bubble around it. Or, to put it in another, more appropriately misanthropic way (for Allen, despite his recent lighting-a-candle-in-the-dark press blurbs in Film Comment, is nothing if not misanthropic), he has equal measures of contempt for name-droppers and those ill-equipped to catch them as they fall. Allen unites both of these factions in Midnight in Paris in the form of an unctuous American academic played by Michael Sheen, who chides Gil that “nostalgia is denial.” (The actor looks chuffed to not be playing Tony Blair or some kind of gay vampire.) Darius Khondji’s camera tracks past him as he bloviates, a row of statues at Versailles drowning out his condescension with their silence. This is one of a few nice visual touches in a film that’s better shot than the bulk of Allen’s recent work. Another finds Gil’s struggle to let go of his soul-killing gig touching up Hollywood screenplays embodied by a seductively splayed McAdams, who pulls him down to the hotel-room bed and away from his lofty ambitions.

It’s the only moment in the film where McAdams is allowed to be at all alluring: never an especially subtle dramaturgist, Allen has turned the character and her well-heeled parents (Mimi Kennedy and Kurt Fuller) into caricatures of Ugly American largesse. Their surface obnoxiousness and the underlying ideological deck-stacking (papa has a soft spot for “Tea Party Republicans”) would seem to validate Gil’s (and Allen’s) desire for a one-way ticket out of the present tense. (As a friend noted, Allen’s childish baiting of hard-line right-wingers is sort of undermined by casting Ms. Sarkozy, Carla Bruni, as a museum tour guide, but c’est la vie). There are two things that dull the reactionary edge. The first is Wilson’s hugely winning performance, which transcends impersonation: if Gil is still ultimately a cipher, the actor at least gives him a little bit of soul. There’s a wonderful close-up where Gil’s shock at finding himself in the company of venerable phantoms melts into stunned delight—the actor’s specialty—and the goofy good vibes are contagious. (It’s the exact opposite of Whatever Works [2009], where Larry David’s dyspeptic braying is like a ten-foot-pole warding off any kind of audience identification.)

Then there’s the way that Allen turns Gil’s escapist fantasies on their head by having Cotillard’s Adriana succumb to a similar species of yearning. At first, the character isn’t particularly interesting. She’s introduced as Picasso’s bedmate, and we learn that she’s also been with Modigliani and other immortals—she’s a muse to the greats. Allen has written female muse parts before, from Mariel Hemingway in Manhattan (1979) to Mira Sorvino in Mighty Aphrodite (1995), but they’ve always been perceived from the outside-in, in erotic counterpoint to the flustered male lead. Adriana is Gil’s hallucination, but she has an inner life. She’s as smitten with the idea of living before her time as her 21st century beau. She longs for the belle époque, and the film obliges her desires by briefly relocating to a thrifty-looking Moulin Rouge, where Degas moans that he’d rather be plying his trade during the Renaissance.

The implication is that even phantoms yearn for the good old days. This realization is, in the end, not so far off from “nostalgia is denial,” though it’s framed more as an affirmation than a dismissal. Gil understands that his shoulder-rubbing reveries are no substitute for nurturing his own gifts, however non-epochal they may be; his solution is to dump both Inez and Adriana for a slim-waisted street vendor with a thing for old 45s. It’s an unequivocally happy ending that’s both preferable to the cosmic smirking of Match Point (2005) and Vicky Cristina Barcelona (2009) and welcome in light of Gil’s moment of self-recognition, which can’t compete with the death-tinged flash of understanding that concludes La Jetée but feels earned all the same. “I’ve had an insight here, even if it’s a minor one,” says Gil. If, as we suspect, that’s really Woody Allen talking, I guess it’s nice to report that he’s 100% correct.

Posted in CS47, Currency, From The Magazine