Jocelyn Geddie/CS43, Currency, From The Magazine 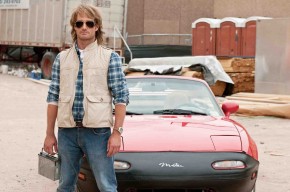 In one of the many incarnations of “MacGruber”—a recurring Saturday Night Live sketch in which the rubber-faced Will Forte plays a hotshot operative whose attempts to defuse a bomb are always derailed by his rank incompetence (or reflexive racism)—the titular character undergoes plastic surgery to compensate for his anxieties about aging. Turning to the camera as intense music blares, his face mutilated beyond recognition, he chirps “Not so bad!” At the risk of damning with faint praise, there is no more apt way to sum up the cinematized MacGruber, which, though beset with the conventional (and usually fatal) problem of ballooning a one-joke  scenario into a narrative feature film, has the signal honour of wrestling with its source material’s own unique structural problems as well. Cast out into the cruel world beyond the televisual bubble to fend for itself, this orphan at least owns its failures, and with courage and occasional inspiration to boot.

The template from which MacGruber springs exemplifies the current style at Saturday Night Live, where first-time director Jorma Taccone and his comedic partners Akiva Schaeffer and Andy Samberg—otherwise known as Lonely Island, of “Lazy Sunday” and “I’m On A Boat” fame—presently dominate the show’s output. In an effort to sustain the interest of bored channel flippers, SNL has long favoured sketches with simple concepts predominantly based on recognizable (and repetitious) characters; taking that reductionist approach one reductive step further into near-Dadaist absurdity, Lonely Island—in sketches ranging from “Andy Popping Into Frame” to “Andy Punching People In The Face Before Eating”—boldly presents its premise upfront, making the situation itself the punchline. From within these austerely deterministic and needle-thin boundaries, however, the trio proves remarkably adept at wringing variations that range from the merely curious to the gut-busting. So it goes with “MacGruber,” where, forcing themselves into a wholly predetermined conflict and resolution (i.e., the bomb introduced in the first five seconds goes off in the last) and a subtly sophisticated tripartite structure to generate comedic tension and rhythm, the writers are unencumbered by a need to attend to development and can simply riff off the increasingly reprehensible character of their “hero.”

Taccone, Forte, and co-writer John Solomon (also a writer for Saturday Night Live) seem to have carried this same spirit into the film adaptation, which finds Forte’s eccentric, multiply-decorated superwarrior pulled out of retirement to hunt down his nemesis Dieter von Cunth (Val Kilmer) in the company of his sidekicks, would-be chanteuse Vicki St. Elmo (Kristen Wiig) and by-the-book Lt. Dixon Pyper (Ryan Philippe). While the almost classically straightforward ‘80s-style action narrative allows room for an abundance of inspired gags built around the MacGruber character, this strategy ultimately works to the film’s detriment. Without the same formal limitations being imposed on the subject matter, but with the same amount of emphasis on absurd “How many things can we imagine happening to this character” jokes, the gags just pile up one after the other, neither progressing towards a gratifying pay-off nor even coalescing into a coherent whole. There are many different kinds of comedy, but the principles of good storytelling are consistent across genres and forms, and especially necessary when working with a substantially longer runtime. Without a clear story to ground the jokes in, the film never really makes a lasting impression nor achieves the resonance (such as it is) that it might have had otherwise.

That’s a lot of sound and fury to make over an intentionally silly film containing no less than two scenes of men with celery jammed in their butts. Still, it’s a shame that the film doesn’t set its sights a little higher, considering the comedic calibre of those involved. In stark contrast to almost every other SNL movie ever made, Forte’s MacGruber—a hubristic would-be action hero fundamentally unable to keep it together—is conceptually rich, and as in its television incarnation, MacGruber succeeds most in the way that Forte and company employ their expanded medium to take their mulleted maladroit to new lunatic heights. Expanding upon their initial parody of ‘80s-TV staple MacGyver—whose peaceful-warrior hero (played by Richard Dean Anderson) was defined by his resourcefulness, staid sense of morality, and “first do no harm” approach to conflict resolution—MacGruber moves from being just a cocksure agent whose composure dissolves under pressure to a pseudo-sociopath, provoking when he should keep the peace and massacring when he should show mercy. (His finishing move: literally ripping out his opponent’s throat, a gross-out gesture that is captured faithfully in numerous close-ups). Indeed, the majority of the film features Vicki and Pyper in increasing states of incredulity as the man careens wildly from sunny insouciance to nervous collapse, sometimes pronouncing his idiot schemes “classic MacGruber,” at other times tearfully offering to fellate people that he’s angered.

Perennially underrated for his consistently funny and diverse work on SNL, Forte will probably not be launched into the stratospheres of fame by his turn in this film, but he’s a deft comedian whose secret weapon is his singularly earnest approach to characterization: his attempts to locate and portray genuine emotion in each situation no matter how ludicrous, debasing, or vulgar the joke may be (see again: celery). Even as his character requires him to turn everything up to 11, Forte approaches each moment with a wide-eyed sincerity that is intrinsically hilarious. While Forte’s erratically funny histrionics inevitably take centre stage, MacGruber is bolstered by committed performances from its supporting cast. Straight-manning it admirably, Philippe proves a surprisingly valuable foil, while SNL-alum Wiig offers yet more proof of her canny comic instinct to adapt to the tone of every scene or partner, while also deftly locating her own stand-out moments (the winner here: the diminutive Vicki’s quietly stricken reaction to having to impersonate a towering leather-clad thug, where Wiig communicates bewilderment, terror, and utter misery without saying a word.)

These notes of subtle underplaying aside, the brass-band broadness of MacGruber’s humour certainly doesn’t have universal appeal. Yet it’s the very nerviness of the enterprise, the carpal-tunnel compulsion with which Forte and company follow their unhinged protagonist down the rabbit hole, that redounds to this makeshift, go-for-broke half-birth’s credit. Classic MacGruber, no—but not so bad, indeed.

Posted in CS43, Currency, From The Magazine