Knocked Up (Judd Apatow, US)

Jessica Winter/Currency, From The Magazine 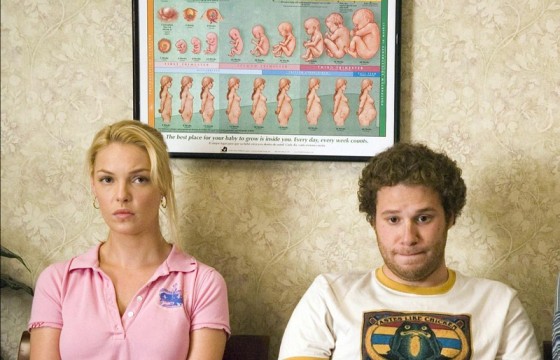 As funny and endearing as Judd Apatow’s proudly vulgar new comedy can be, it may give the viewer nostalgia for the sequence in Fast Times at Ridgemont High (1982) when Jennifer Jason Leigh falls pregnant by a guy she shouldn’t be with, promptly gets an abortion, and rides back from the clinic with her brother, who takes her out for a cheeseburger. And that’s it: no apparent self-torment, no post-facto breakdown, no further discussion. Twenty-five years later—plus a nationwide swing to the right, the founding of Operation Rescue, and that deathless Ben Folds Five song—Knocked Up presents us with a similarly unpromising scenario: smart twentysomething who just got a big career break has inadvertently fruitful one-night stand with unemployed shlub. Yet in this case, abortion is only briefly suggested by third parties and dismissed out of hand. That’s not to say that the outcome is unrealistic: When Allison (Katherine Heigl) bursts into tears at the sight of the heartbeat on the sonogram, it’s obvious that ending the pregnancy simply isn’t an option for her—just as bearing a child simply isn’t an option for Leigh’s teenage character in Fast Times. Still, when the closest a movie like Knocked Up comes to even saying the word is “rhymes with shmashmortion,” it’s clear that we’re considering less a depiction of life as actual people live it but rather a pop-culture product that embodies the squeamish contradictions of the mainstream moment a little too accurately. This is a movie, after all, in which Allison always has sex with her bra on but we get an extreme close-up of the baby’s head inching through Mom’s conspicuously bald vagina. Who knew the miracle of childbirth could be liberated from the dark shame of pubic hair?

Filthy with fecund one-liners, Knocked Up is another variation on the cross-market comedy template familiar from Wedding Crashers and Apatow’s feature debut, The 40-Year-Old Virgin (both 2005): It’s two-thirds frat-boy farce and one-third chick flick, it’s mostly crude with touches of prude, and it’s overlong and somewhat belaboured in its execution of a straightforward premise. Ben (Seth Rogen) seems like a loveable bear through beer goggles but, in the harsh light of the morning hangover, just looks like a tubby layabout who’s trying to launch a porn website. (He’s in fact all of the above.) Once Allison discovers she’s pregnant, she has to determine the possibility of this embarrassing memory turning into a good partner and father, but his basic stats are dire: Canadian-born Ben is living illegally in Los Angeles, he’s got gross assets in the low three figures, and his choice of indolent, pot-addled friends and roommates does not speak well of his judgment. And the contented promise of family life is further undermined by Allison’s shrewish sister, Debbie (Leslie Mann) and her long-suffering husband, Pete (Paul Rudd), whose marriage is a shrill and sterile exercise in avoidance and resentment.

A courtship comedy with a precisely defined timeline, Knocked Up mitigates its various contrivances on the strength of its unassuming leads and a bevy of sublime grace notes: Kristen Wiig as Allison’s passive-aggressive boss, Charlyne Yi as a giggling stoner, Craig Robinson as a philosophical club bouncer whose soul-searching monologue comes out of nowhere and deserves its own movie. In The 40-Year-Old Virgin, Rogen (also a star of Apatow’s died-young TV series Freaks and Geeks and Undeclared) was a witty, bluntly confident stud whose extra pounds only embellished his ordinary-guy sex appeal. He adds a few too many sad-sack flourishes to that persona in Knocked Up, but he has convincing odd-couple chemistry with Heigl, who’s lovely: impossibly beautiful yet totally approachable. This being a romantic comedy, studio bylaws require a Third-Act Undermotivated Screaming Match That Puts the Entire Relationship Into Protracted Doubt, but Heigl powers through the pro forma scene on the strength of her tectonic roar—one that heralds a primal insurgency of vengeful womanly hormones. Hysteria has rarely been so commanding.

Maybe because the pot haze is thicker and the main characters less repressed, Knocked Up doesn’t strain as hard for hilarity as The 40-Year-Old Virgin, and its big set piece indicates the head movie that could have been: Ben and Pete’s cathartic heart-to-heart, catalyzed by a combination of psychedelic mushrooms and Cirque du Soleil. This disturbed interlude wraps up in a Las Vegas hotel room among mood-altering furniture (“It’s weird that the chairs even exist when you’re not sitting in them”) and achieves such an uncanny verisimilitude that one can only suspect the presence of actual performance-enhancing drugs. (Psilocybin—the new CGI?)

Less inspired is the ongoing dorm-room improv class among Ben and his scatologically fixated pals (personal favourite rejoinder: “My shit looked like a stuffed animal”), but they do have a lot to talk about: sex, drugs, Star Wars, why Lost’s Matthew Fox “deserves a beatdown” (actually, more on this topic would have been edifying), and, crucially, how much ass Eric Bana kicked in Munich (2005). Allison and Debbie, on the other hand, talk about their respective men and whether or not thirtysomething Debbie still looks hot. Why do movie women so often have such scant conversational resources? And why do they so rarely have any pop-cultural references at their disposal? For instance, when Allison and Ben can’t settle on a late-term sex position (Allison is insecure about her changing body, while Ben worries that he will poke the baby), it’s a perfect opportunity for Allison to point out that the sideways-from-behind position really worked well for Eric Bana and his very pregnant wife in Munich. Again, it’s hard to get a handle on the internal logic of a movie wherein a household of guys get pinkeye from farting on each other’s pillows but a young, horny pregnant couple can’t figure out how to have sex—even with the benefit of Eric Bana’s heroic example in Munich!

Actually, given the number of basic logical questions that Knocked Up leaves open, it’s possible that the improvisatory vibe of many scenes extends to the film’s entire rickety architecture. How has jobless Ben made an insurance settlement in the low five figures last for so many years? Who is paying his rent? How does he pay for food and gas? How does he eventually find a decent office job, given his immigration status and his lack of employment history? Would this presumably entry-level job pay for an apartment for three? How did he get the apartment, given his immigration problems and his presumed lack of credit history? Why doesn’t Allison just find her own damn apartment in the first place? These questions might sound literal-minded, but they’re part and parcel of a story about a guy who has to grow up fast and shoulder daunting practical responsibilities. The movie is only comfortable operating on the level of emotions and gut instincts—all that is solid melts into air by the warmth of magical good intentions.

Knocked Up is hard to dislike: it’s a reliable laugh factory, it really loves babies, etc. But like so many films that gestate in Hollywood, it breathes the uncirculated air of the gated community. Maybe it wouldn’t evaporate on contact—maybe it would have been funnier still—if it weren’t so bizarrely insulated from some of the gnarled dilemmas that Ben and Allison’s flesh-and-blood counterparts face every day. It sketches a world without abortions or pregnant sex or frustrating first-time job hunts or skeptical landlords or status anxiety or run-ins with the Department of Homeland Security. Or pubic hair. But at least with that last one you can blame the MPAA.

Posted in Currency, From The Magazine