Michael Sicinski/CS49, Currency, From The Magazine 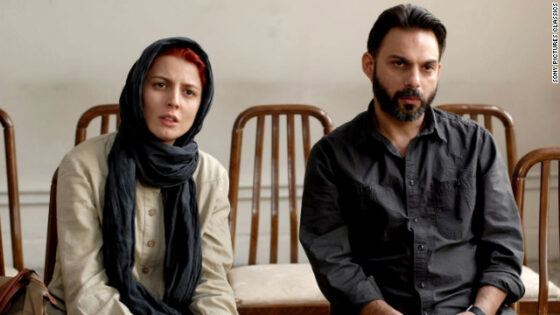 A Separation is one of the year’s most accomplished films, and like so many films we might characterize as “accomplished,” it hasn’t garnered actual detractors. It merely fosters a coterie of skeptics. Several commentators felt that Farhadi’s film shouldn’t have won the Golden Bear over Béla Tarr’s more deserving The Turin Horse (or, to a lesser extent, Ulrich Köhler’s Sleeping Sickness) at this year’s Berlinale. There has been a related angle of more specific criticism, namely that the film is fundamentally anti-cinematic, that the Berlin jury opted to award Farhadi’s “screenplay-driven” work over purer filmic expression. That A Separation won two group acting prizes only cemented the perception that it’s mired in the Bergman camp of “filmed theatre,” and not the Bazin camp of refined cine-plastics. To further complicate matters, A Separation has been offered as Iran’s submission for the 2012 Academy Awards. This means, then, that while there is little question that A Separation is a bracing piece of psychological filmmaking, it is also a film that, whether intentionally or not, has coloured inside the lines of the regime of Ayatollah Khamenei and President Ahmadinejad.

While Farhadi is certainly no Majid Majidi, neither is he a dissident on the order of Panahi, Rasoulof, or the now-in-exile Makhmalbaf family. This is not to say that it is incumbent upon Farhadi to make films like a dissident. However, we have to consider this “problem” if we’re going to at least partly answer the lingering skepticism surrounding A Separation. To wit: in order to be selected as Iran’s submission for the Oscars, A Separation had to garner a recommendation from the nine-member Farabi Cinema Foundation, a para-governmental arts-and-culture administration. Anyone concerned about the nefarious double-dealings of the MPAA should check out the language on the Farabi website which, remember, reflects the Islamist apparatchiks at their most benign. Farabi describes itself as having saved Iranian cinema from the “mystic cinema” of “the first decade of the 80s” [sic], when “the dominating aspects of the films produced by Andrei Tarkovsky and Sergei Paradjanov” as well as “leftist revisionists” essentially crippled the glorious cinema of Iran. (Where Is the Friend’s Home? [1987]; The Cyclist [1987]; The Tenants [1986]; Canary Yellow [1988]. I think we all remember those dark days!) “Such films,” say the Farabis, “repelled the spectators mainly choosing cinema to spend one to two hours having fun.”

It’s virtually a truism that censors are too stupid for words. That’s precisely what makes them dangerous. But this is also why they can be fleeced to such productive effect; ideologues may see enemies everywhere, but this is the paranoid inverse of their true psychological condition. They tend to see their own ideas reflected in every social institution, in the supposed “heart and soul” of the people they oppress under the guise of service. If Farhadi is somehow able to make films in Iran, distribute them, and even to have political organs like the Farabi Foundation actively promote them, then this is not the result of political capitulation on the filmmaker’s part, at least so far as the evidence onscreen may serve as testimony. It is entirely possible, I suppose, that the cine-mullahs of the Islamic Republic look at A Separation’s conflict between the dissolving middle-class couple of the original title, Nader (Peyman Moaadi) and Simin (Leila Hatami), on the one hand, and smugly pious lower-class Razieh (Sareh Bayat) and Hodjat (Shahab Hosseini) on the other, and see a validation of humble values, an indictment of the exploitation of poor, unsophisticated Shia traditionalists by the decadent bourgeoisie. If so, Farhadi should make sure this exact panel of numbskulls assembles to approve all his subsequent work.

Opening as it does in a family judge’s office, with Nader and Simin discussing their impending divorce, A Separation is, of course, fundamentally about the dissolution of a marriage and the emotional toll it takes on the couple’s ten-year-old daughter Termeh (Sarina Farhadi, the director’s daughter). But, as Termeh herself angrily points out several times, her parents’ separation sets in motion numerous other events in this incident-heavy film. Simin moving out, and the need to have someone at home to care for Nader’s elderly father (Ali-Asghar Shahbazi), a late-stage Alzheimer’s patient, while Nader is at his bank clerk job, necessitates bringing Razieh into the apartment as a daytime caregiver. And the ensuing plot, while indeed partaking of a certain willingness to unfurl along what Aristotle called “the complex plan,” is also orchestrated through blocking, editing, and mise en scène. Not only are we witnessing a “separation” of Tehran’s dominant classes along economic lines, cultural affiliation, and educational opportunity: Farhadi separates them in space and architecture as well. The key incident of the film—Razieh’s miscarriage, Nader’s culpability—is a class and gender conundrum played out entirely though movement inside and outside the frame. What happens when semi-secular urbanites let Koran-thumping conservatives through the threshold? And on a more base, bodily level, at some point Razieh’s fetus separates from the uterine lining, but where, and when?

As with his previous film, About Elly (2009), in which a group of upper-middle-class law students bring the teacher of one of their children into their vacation group, with disastrous results, Farhadi is examining class divisions, particularly as they are inscribed upon the bodies of women. About Elly, which is a more successful concept than a movie, seems superficially Antonioniesque, but in fact it’s Farhadi’s Iranian riff on certain Chabrolian themes. Upper-class prerogative slowly unwinds itself as a set of tendrils ready to engulf and devour any outsider who threatens its charmed circle. Despite some resonant, slate-gray seaside cinematography, About Elly is not especially accomplished cinema. By contrast, A Separation is characterized by a restless, roving camera (courtesy of Mahmoud Kalari), nearly Dogme-fied but consistently truncated in any and every lateral move. Farhadi’s organization of domestic space, Nader’s apartment in particular, is fragmented and constructivist, sliced by internal windows and glass doors. Yes, it’s almost silly to point out that from scene to scene most characters are “separated” from one another, even during conversations.

But this in itself points again to a possible misconception on the part of Iranian censors. If, from a conservative Islamic standpoint, one is supposed to see the collapse of the bourgeois family as a signal of its basic decadence, one could unconsciously overlay this reading onto their semi-modernist architecture. No one touches, nothing connects. However, Farhadi shows us that, within this glass box, there is also a high degree of connection. Even though there are obvious barriers to understanding and empathy, Nader, Termeh, the grandfather, and (when she’s there) Simin do see one another. What Farhadi is staging, in essence, is psychological interiority, a modernist notion of the subject that insists that we cannot know one another solely from our actions, that only through communication and discourse can we overcome “separation,” a basic human condition. (When Termeh and Nader have the pivotal conversation about whether or not he knew Razieh was pregnant, they are face to face at the kitchen table. By contrast, the discussions between Simin and Nader are weighed down with everything left unsaid.)

By contrast, Razieh and Hodjat’s modest home is seen only once, in the meeting where a settlement for the miscarriage is proposed. It is an open space, with the couples, relatives, creditors, and religious officials seated along the perimeter of an empty centre. This is the ostensible public/private domain of Islamic law, where everyone understands how to comport him or herself, chadors and moral codes firmly establish the surfaces of known human engagement, and even “the soul” is, in a sense, legislated. Interiority is a bourgeois affectation within this framework, although of course it’s there and it surfaces all the time, as in Hodjat’s impotent lumpen rage. (Ideally he would join the Basij and get his head right with God and Country.) But, as Farhadi ultimately reveals, this open space is the zone of lies just as toxic, if not more so. And here, we might make a final note about Farhadi’s understated formal cunning by remarking on what he doesn’t do. Although there are not as many physical barriers in this space as there are in Nader and Simin’s upper-middle-class theatre of operations, Farhadi nevertheless maintains the same short, multi-perspectival, sentence-period shot-length and editing scheme. He never makes the lower-class religiosity of Hodjat and Razieh more “organic.” In fact, all of A Separation is delineated with the same style, which, I think, saturates the entire spatial universe of the film with both anxiety and curiosity, a distrust of fixed answers. (Did the Farabi Foundation just think it was a good way to save on film stock?) The end result, then, is that even those ostensibly more at home within this, the Iranian Revolution’s decadent phase, must cower and dissemble their way through daily life. After radical division, dialectics; it seems the social strata are not so separate after all.

Posted in CS49, Currency, From The Magazine