Phil Coldiron/CS65, Currency, From The Magazine 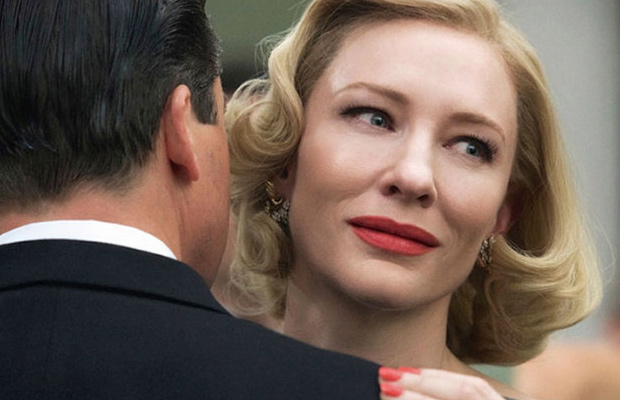 It is a question of pleasure after all…

Reporting from Cannes, Daniel Kasman concluded his dispatch for Mubi’s Notebook on Carol with an apparently simple question, one to which he admitted he was unable to find a satisfactory answer: “So what is at stake here?” To be certain, the stakes of Todd Haynes’ sixth feature film—or his seventh, if one counts the HBO production of Mildred Pierce, which initiated a marked shift in Haynes’ style away from the lushly arch formal reflexivity of much of his earlier work—differ significantly from those of the Patricia Highsmith novel on which it is based, a hugely popular book which nonetheless remained unacknowledged by its author for decades due to its “transgressive” sapphic content. Writing from the literary closet under the pseudonym Claire Morgan, Highsmith’s concerns were those of psychological realism, the teasing together of a dense web of tensions defining the relationship between Therese Belivet, an ingénue set designer, and Carol Aird, a housewife on the brink of divorce. When, late in the novel, Carol confirms that Therese finally knows her emotions even better than her best friend of decades, the stakes are clarified absolutely. When, early in the film, a secondary character in the thrall of a sixth viewing of Sunset Blvd. announces that he’s “charting the correlation between what the characters say and what they’re really feeling,” Haynes and his screenwriter, Phyllis Nagy, provide a telling bit of misdirection away from their own.

This line, as is the case with a majority of the film’s dialogue, is an invention of Nagy’s. It’s spoken by Dannie McElroy (John Magaro), a New York Times staffer who seems quite in love with Therese (Rooney Mara), despite, or perhaps because of, her unhappy relationship with his friend, Richard Semco (Jake Lacy). A few scenes later, while attempting to seduce Therese in an emerald-dark moment at his Times office, Dannie offers that the whole of human interaction should be understood through the lens of physics, every relationship reducible to something like a scientific explanation. If one takes these two comments from Dannie as face-value declarations of artistic intent, then they are both inelegant, obvious faults in the film’s otherwise impeccable surface and, more damningly, confirmation that Haynes and Nagy have failed to find a cinematic analogue for Highsmith’s psychological acuity. If this were the case, Carol would fall into the tremendous distance between Haynes’ rich, icy style and what his characters are “really feeling,” and Kasman’s charge that “glamour comes very close to trumping these people and their story” would indeed be justified. But I believe this gets Carol wrong.

She thought of people she had seen holding hands in movies, and why shouldn’t she and Carol? Yet when she simply took Carol’s arm as they stood choosing a box of candy in a shop, Carol murmured, “Don’t.”

While Highsmith’s third-person narration serves the political function of distancing her from complicity with her young, groping heroine, she nonetheless spends considerable time telling the reader not only what Therese is thinking, but what Therese imagines those around her, and Carol in particular, are thinking as well. Her characters are precisely the stable sites of consciousness that populate most popular American fiction in the postwar years; if they often find themselves uncertain about what it is they want, it’s because they haven’t yet mastered the navigation of a social world which seems set on obfuscating both the routes towards a fulfillment of their desires and their memories of prior happiness. Haynes, working for the first time from a screenplay for which he has no credit, is concerned with a more basic question: How does a queer consciousness form itself in the first place in the absence of models, i.e., images, to work from?

As Melissa Anderson noted in Artforum, Carol, after more than a decade in development, “arrives at a moment of inexorable homonormativity.” If lesbianism remains underrepresented on screen compared to male homosexuality, the fact of two women in love no longer carries the charge of potential offense for any but the most backwards among us. But if certain sorts of queer desire are no longer required to hide in public—and it cannot be stressed enough just how certain those sorts are, and just how dangerous the situation remains for those who, after Sontag, have not yet experienced an equivalent social change to accompany the change in visibility—Haynes and Nagy remain concerned with what retains its capacity for difference even within the form of arthouse normativity. In presenting a romance between two decidedly femme women, a fact which is indeed present in Highsmith’s novel (Haynes and Nagy retain the moment in which Therese encounters two women “in slacks” and immediately turns away, made obviously uncomfortable by their gaze), the film draws out a more general ambiguity in female friendship, where physical and emotional affection have not yet been sheared away and placed squarely under the sign of homosexuality. Cate Blanchett’s Carol Aird, in all of her overwhelming glamour, stunningly tailored suits, perfect coral nails, radiant blondness, and velvet drawl, is something near the ideal of that paragon of Cold War normativity: the suburban housewife. And Rooney Mara, who might have been Natalie Wood, could just as well have been a few years removed from a place on the homecoming court if she weren’t a girl of such strange temperament.

…as if their bodies were of some materials which put together inevitably created desire.

The narrative shape of Carol, and several of its most significant gestures, are lifted directly from Lean and Coward’s Brief Encounter (1945), whose self-doubting adulterers are such middlebrow bores that even with only a few hours a week for their dalliance, they routinely can think of nothing better to do than go to the cinema. Haynes and Nagy don’t send Therese and Carol to the movies (Highsmith even has Therese think to herself at one point how strange it is that she hasn’t ever seen a film with Carol), but, as Haynes told Miriam Bale, “you’re learning about women who are still very much codified by the society.” The film’s Therese lives in a world far from Highsmith’s: rather than jostling amongst the downtown theatre scene as a burgeoning set designer, we see her only in her seasonal job at Frankenburg’s department store before her obvious talent as a photographer leads her to the stuffiest of institutions, The New York Times. That is, Carol is concerned with what marks queerness as a space of difference and anti-normativity within the oppressive, normative bounds marked out here by two jealous, confused men who remain convinced of their ability, or perhaps even responsibility, to control the women in their lives. In Carol’s case, this is further complicated by her own deep commitment to her role as a mother, which is both her biggest challenge (her estranged husband, Harge, uses the impending custody battle for their daughter and the legal violence of state-sanctioned heteronormativity as a means of control) and the source of her deepest strength (the love she feels for her daughter is too great for her to allow it to exist in the presence of the lie that would be “living against her grain”).

What is at stake then is nothing more or less than the possibility of a queerness that remains undefined, one that emerges without precedent, and refuses to offer itself as a model of, or for, anything. It is a question of the specificity of a desire, one which is hardly settled, and the film’s period setting only serves to underscore its continuing resonance—two of the year’s best books, Alexandra Kleeman’s You Too Can Have a Body Like Mine and Maggie Nelson’s The Argonauts, deal with similar specificity with questions of normativity and queerness. It’s impossible to overstate the social importance of images in both shifting the terms of acceptance and allowing individuals to better understand their own position: simply look at the confusion that pools in Mara’s eyes throughout the film’s early scenes, as she struggles to understand her situation in the absence of any image against which to check it. It’s hardly an accident that when our lovers come together for the film’s happy conclusion, Therese has begun to present herself in Carol’s image, arriving for tea in a stunning grey suit after spending most of the film in floppy dark wool skirts and sweaters. But even as Carol offers the therapeutic value of its images, its most thrilling pleasure is that its characters themselves, as Therese says so many times and Carol says memorably once, don’t know what they’re really feeling. They’re simply feeling it and acting on it as they can.

Posted in CS65, Currency, From The Magazine