By the Book: Evil Dead 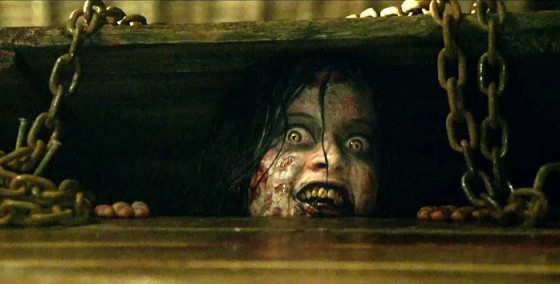 In Fede Alvarez’s Evil Dead—which pointedly but pointlessly drops the definite article from its title—the demonic spirit is willing and the flesh is as weak as it needs to be: not since Carter Smith’s underrated 2006 adaptation of The Ruins (or maybe Danny Boyle’s 127 Hours) has a movie focused so intently on snipped sinews and torn tendons. The gore effects here are pure pulled pork, with the meat dropping luxuriously off the bone. This deluxe charcuterie spread is at once meant to signal the film’s connection to Sam Raimi’s original 1981 splatter-cinema flag bearer and also to definitively top it.

Yet this uneasy combination of slavish homage and one-upmanship is precisely what’s wrong with ED 2013. When the camera goes roaring through the woods in homage to the hockey stick-assisted tracking shots of the original, or Bruce Campbell and Raimi’s 1973 Delta Oldsmobile crop up for rib-nudging cameos, it feels like little more than fan service, dutifully ticking off boxes so as not to tick off the diehards in the audience. Much as the 2011 reboot of The Thing (self-allegorically) attempted to hide inside the frosty textures of John Carpenter’s ice-cold classic, Evil Dead filches as many of its predecessor’s signature shots as it can, and elsewhere borrows from The Shining (1980), Carrie (1976) and The Exorcist (1973), not to mention an adrenalized lift from Pulp Fiction (1996).

The only real scratch elements in the script (by Alvarez and Rodo Sayagues) are the characters, who are given more dimension than their human pin-cushion antecedents (recall that Campbell’s square-jawed nincompoop act didn’t really click in until Raimi’s 1987 Evil Dead II). Instead of oblivious spring breakers meddling with the occult, Evil Dead offers up people with problems: Mia (Jane Levy) is a junkie who’s settled on her family’s dilapidated summer home as an ideal location to try to go cold turkey, prompting her semi-estranged brother David (Shiloh Fernandez) to drive up with his girlfriend (Elizabeth Blackmore) in tow. Rounding out the quintet are nursing student Olivia (Jessica Lucas) and her bookish boyfriend Eric (Lou Taylor Pucci), who can barely restrain their disappointment in David, who seems to have a history of fleeing in the midst of family turmoil.

It’s debatable whether or not trying to create well-rounded human beings in a movie whose sole purpose is to eventually tear them apart in creatively disgusting ways is a good idea, but the intervention conceit is admittedly clever, as it immediately creates a dynamic where Mia is isolated from the rest of the group and thus more susceptible to sinister forces. The extremity of her withdrawal symptoms also provide a credible reason that the other characters are so slow to realize what’s really going on after Eric foolishly reads aloud from the freaky, hide-bound book he discovers in the basement, stashed on a table underneath a whole cattery’s worth of dangling, ritualistically skinned felines. This is one of the screenplay’s weaker points: while The Evil Dead was never exactly a model of narrative coherence, the fact that the demons were unleashed by an audio recording of a scholar reading out the ghoul-invoking incantations obviated the need to have the characters act so stupidly. By contrast, Eric’s obsession with the book is sketchily rendered at best, once again calling into question the purpose of contriving a more detailed dramaturgy when all the film requires is for the characters to go through the same old bloody motions.

Levy has a great, malleable face—tightly pinched one moment and oddly elongated the next—and acts the early stages of Mia’s possession with aplomb, until she’s reduced to a shambling girl-ghoul out of The Ring (2002). The academically inclined might have a field day with the fact that Evil Dead gradually divides its characters along gender lines, with three grotesquely disfigured, mindlessly possessed young women stalking their overmatched male counterparts through a series of increasingly sadistic set pieces, but this is purely postmodern calculation. When Mia finally emerges from her supernatural stupour to become both the proverbial Final Girl and a distaff Ash, the imagery could be an elaborate tribute to Carol Clover’s seminal horror-film cum gender-studies text Men, Women and Chainsaws. In this, the filmmakers manages to have it both ways, gleefully indulging in female abasement and monstrosity before playing the quasi-feminist card—a strategy that owes more to cool kids Quentin Tarantino and Eli Roth than Raimi, who in Drag Me to Hell (2009) got great comic mileage out of refusing to rescue or redeem Alison Lohman’s callow, gypsy-baiting anti-heroine.

Even if one gives Alvarez the benefit of the doubt for this apparent stab at self-reflexivity—and the director’s dubious comments on the topics of victimization and viewership in The Village Voice do prompt plenty of doubts—the question is whether we really need (or want) an Evil Dead that takes its cues from Joss Whedon and Drew Goddard’s The Cabin in the Woods (2012). I can’t have been alone in hoping for an earnestly freaky little flick to rebut that film’s contention that the institution of the American horror cinema has been so (literally) overrun by clichés that the only solution is to blow it up once and for all—a smug diagnosis delivered by glib clinicians too busy gloating over the wreckage to bother erecting anything to take its place. As a fanboy gloss on Funny Games that finally pointed a big, CGI finger at the audience, Cabin was enervatingly clever, and yet it seemed to miss the (haunted) forest for the trees. Why simply bemoan the stagnation of genre moviemaking when it would kill two birds with one stone to produce something genuinely surprising and spontaneous?

Where The Cabin in the Woods settled for hand-wringing, Evil Dead actually goes to the trouble of severing some limbs, and yet its obeisance to its parent franchise and the stylistic conventions of 21st century big-studio grindhouse product—a glumly desaturated colour palette, indistinctly snaked-hipped young actors, carefully integrated in-jokes—validates Whedon and Goddard’s thesis that there really is nothing new under the full moon after all. There are, of course, greater sins than redundancy, and if the worst that can be said of Evil Dead is that it goes where other movies have gone before, it might not seem like a criticism worth levelling: after all, you could count the number of remakes and reboots that truly reimagine or redefine their source material on one disembodied mitt.

But what’s finally most annoying about this relatively well-executed bit of brand extension is that its brutality exists in a vacuum. The Grand Guignol of The Evil Dead was a reaction against the tony ’70s mainstreaming of B-movie tropes; without ever being pedantic about it, Raimi and such peers as Stuart Gordon (Re-Animator) and even the Coen brothers circa Blood Simple (1984) were gleefully blowing raspberries and spitting eyeballs at those who were trying to make horror movies safe for mainstream consumption or highbrow contemplation. The Evil Dead may have gained notoriety and won many of its most devoted fans as a “video nasty,” but there wasn’t anything mean-spirited about it; the basic benignity of its intentions was clarified by its sequel, which quickly dispensed with any pretense of actually being scary to run through some tricked-up Three Stooges routines.

Yet just as Raimi’s personal journey from DIY outlier to Spider-Man mastermind anticipated the larger pop-cultural narrative of the Revenge of the Nerds (including the ascent of Joss Whedon), the abundant gore of his breakthrough pictures has gone from outré affectation to industry standard. The filmmakers who have followed in his wake risk nothing by ramping things ever further over the top. The characters in Evil Dead are in danger of losing their souls, but the movie is impervious to such anxieties, being soulless to begin with.