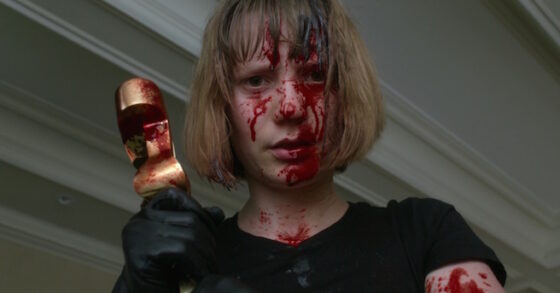 Back in September, when the world was young, I opined in this space that Maps to the Stars was its director’s worst movie in fifteen years. Six months later, on the eve of its American release, I’m not so sure. It’s a peculiar quality of David Cronenberg’s films that they almost always loom larger in the rearview, which probably has something to do with their relentlessly conceptual bent. For all the advances that our hero has made over the past forty years on an industrial scale—the long, strange trip from the infested suburban Montreal high-rise of Shivers (1975) to the Hollywood milieux of his latest—he’s never been a particularly supple dramatist. Videodrome (1983) endures because of its technophobic prescience rather than its cut-rate characterizations, while the narrative of even a late-ish triumph like A History of Violence (2005) is roughly slung over a sturdy generic frame.

Like pretty much every other Cronenberg film, A History of Violence is a film of bland surfaces and burbling subtext; it works because it finally turns itself inside out, its innards proudly exposed. This rupturing of boundaries is a common denominator between cult and art cinema, which may be why this filmmaker has been claimed at different (or overlapping) times by academics, auteurists and cultists alike, as well as (of course) the Canadian nationalist cheering section. The assumption shared by all these camps is that over time, Cronenberg has grown increasingly refined in his approach: that he’s gone from exploding heads to blowing minds. But what’s most challenging—and for some of us, maddening—about this particular body of work is that the affectless aspects of Cronenberg’s amateur efforts have carried over into the newer films routinely avowed as masterpieces. For instance, the clumsy blocking of the domestic scenes in Eastern Promises (2007) doesn’t seem too far removed from the cheapjack atmosphere of Scanners (1980), even as the later film’s climactic, money-shot bathhouse brawl feels like the work of a far more advanced filmmaker.

The issue here is tricky. It’s not that Cronenberg’s work is uneven, exactly, but rather that his once-radical ping-ponging between Cartesian extremes of cerebral dialogue and visceral violence has itself become rote—which in turn makes it difficult to accurately gauge his connection to his material on a film-by-film basis. As Seth Brundle once wondered aloud, “Is it live, or is it Memorex?”

Which brings us to Maps to the Stars, which at first glance appears dead on arrival—a descriptor that might also apply to its (anti-)heroine Agatha Weiss (Mia Wasikowska). Like many a blond ingénue before her, Agatha has descended like a locust on the West Coast to try her luck in the movie industry, but she’s probably the first one whose body is covered in horrible burn scars, which her semi-fashionable array of frocks and long black gloves conceal whilst still calling attention to what lies beneath. Although Bruce Wagner’s script will (laboriously) unravel the mystery of Agatha’s markings and grant her a long-awaited Pyrrhic victory, the initial image of her disembarking from a bus and shuffling down Hollywood Boulevard is witty and creepy in and of itself: clad as Agatha is in funereal drag, the limousine that picks her up—driven by Jerome Fontana (Robert Pattison), a struggling actor-slash-wannabe screenwriter who exists at the edges of the story, and is very obviously ex-driver Wagner’s surrogate—may as well be a hearse.

That Maps to the Stars can be convincingly parsed as a ghost story about a prodigal ghoul who hounds her variously fucked-up family members to their deaths as revenge (a dish apparently best served on fire) marks it as a minor but significant departure for Cronenberg, who in his more pronounced genre efforts has always styled himself as a science-fiction specialist rather than a dabbler in the supernatural (his for-hire job on the Stephen King adaptation The Dead Zone [1983] notwithstanding). It’s certainly not a coincidence that Maps’ parade of beyond-the-grave hallucinations takes place at the epicentre of popular illusionism, but the film doesn’t do nearly as much as it could have with the idea of a haunted Hollywood. In lieu of something truly demonic, Cronenberg and Wagner have conjured up a wry poltergeist of a movie, one that’s more obstreperous than scary.

The prime targets on Agatha’s kill list are her father Dr. Stafford Weiss (John Cusack), a Hollywood body-and-mind maestro who literally massages the trauma out of his tightly clenched clients; her pill-popping stage mother Cristina (Olivia Williams); and her brother Benji (Evan Bird), a geeky-hot pre-teen movie idol in the Jonathan Taylor Thomas mold. (Wagner had reportedly been developing the screenplay for decades, which explains its occasionally anachronistic industry reference points.) The basic thesis of Maps to the Stars, to quote another Canadian idol, is that all families are psychotic, so in addition to the Weisses we get Julianne Moore as Havana Segrand, a fading star who has Stafford on speed-dial thanks to her difficult relationship with her own mother, a famous former starlet who, despite being long dead, keeps making house calls (in the spectral form of Sarah Gadon) to taunt her daughter. Eventually, Havana will hire Agatha as her PA, which neatly seals the destinies of these two showbiz clans.

The web of dysfunction has been very cleanly diagrammed by the filmmakers, and the blueprint duly annotated with jokes—volleys of hostile one-liners that have led to much speculation about whether Maps to the Stars is a) an out-and-out comedy and b) an effectively discordant and discomforting one if so. Wagner’s script certainly goes for broke in the latter department: Benji hasn’t been onscreen for more than two minutes before he’s castigating his agent for being a “Jew faggot,” while Havana celebrates the tragic accidental death of her rival’s child by skipping around her palatial backyard while singing Steam’s “Kiss Him Goodbye,” a bad-bitch reverie to rival that of Rosamund Pike’s heel-clicking vamp in Gone Girl.

I bring up David Fincher’s film because, like Maps to the Stars, the fans of Gone Girl (and I am one) insist that it’s a) a comedy and b) an effectively discordant and discomforting one. The tension between Gone Girl’s meticulous, grey-scale mise-en-scène and its purple-hued storytelling is apparent and rather exciting, but for those who don’t immediately find Gone Girl funny, the film is hard slogging. With this in mind, I didn’t find Maps to the Stars particularly funny, partly because its grotesque showbiz universe is so wearyingly familiar and partly because Wagner hits his anti-grace notes so squarely on the nose. While I can acknowledge Cronenberg’s strategic decisions to isolate his characters in one-shots while they hurl barbs back and forth and to torque the film’s sound design to emphasize the dead air which the audience’s nervous laughter is supposed to fill, it doesn’t feel like the aesthetic has been generated out of the material so much as been layered atop it.

What I’m trying to say here is that Maps to the Stars is recognizably Cronenbergian, to the point where late style is basically indistinguishable from laziness. This is the peril of trying to write about a major filmmaker who has historically proved smarter and more resourceful than his critics (just ask Marshall Delaney). If Cosmopolis (2012) or Maps to the Stars are as “bad” as they first appear—stilted, shambling, single-minded and prosaic—then what about the acclaimed predecessors they so evidently resemble? Or conversely, if the vast majority of Cronenberg’s work either holds up or improves with some distance, who are we to second-guess the guy the first time around?

So even if Maps to the Stars isn’t especially funny or entertaining, and certainly doesn’t feel at all spontaneous, it also isn’t that bad. It exists in continuity with the rest of Cronenberg’s work, which is its chief value and also its limitation. The final images of Agatha and Benji lying side by side in a drugged haze recall the sibling suicide pact at the end of Dead Ringers (1988), but here the mood is strangely triumphant –where the Mantle brothers finally fell apart, the Weiss children are finally exercising agency and exorcising the sins of their parents at the same time. The climactic invocation of Paul Eluard’s poetry suggests that old standby of transcendence in-death—another way of saying “long live the new flesh.” And yet it’s uncertain who, exactly, is experiencing a sense of “liberté” at this late juncture: maybe the characters, possibly David Cronenberg, and definitely not film critics.