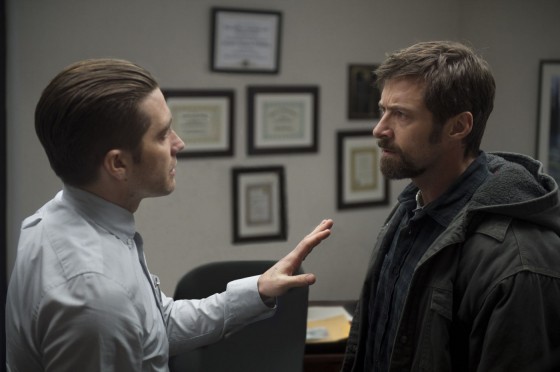 It’s abundantly clear from very early on in Denis Villeneuve’s Prisoners that rough-hewn carpenter Keller Dover (Hugh Jackman) is something of a survivalist: his basement is full of worst-case-scenario provisions, he repeats his father’s “Be Ready” mantra to his teenage son, and recites the Lord’s Prayer while the boy shoots a deer that will later furnish a family dinner. All of this is meant not only to prepare Keller for the worst but to harden him to the world’s evils—to make an island for himself and hope that no one swims ashore. Only hours after the father-son hunting trip, while Keller and his family are visiting their neighbours Nancy and Franklin (Viola Davis and Terrence Howard) for a post-Thanksgiving visit, both couples realize that their youngest daughters are nowhere to be seen. Suffice to say that none of Keller’s precautions have prepared him for this, but he approaches the crisis with characteristic resolve, telling the detective assigned to the case (Jake Gyllenhaal) to “shut the fuck up” moments after meeting him, and taking an overly hands-on approach to finding his daughter. Yet even as he remains unfailingly determined, Keller never seems hopeful—it’s as though the present situation confirms the suspicion with which he’s long viewed the world.

Though Prisoners dutifully touches on a range of responses to the two families’ shared ordeal—from the near-catatonia of Keller’s wife Grace (Maria Bello) to the anxious but measured attitude of Nancy and Franklin to Keller’s burning rage—the fact that it focuses almost exclusively on the last of these should tell you pretty much all you need to know about the mood that Villeneuve and screenwriter Aaron Guzikowski are aiming for, i.e., the child-endangerment hyperbolics of the Mystic River (2003) and Gone Baby Gone (2007) variety. Like that Dennis Lehane one-two punch, Prisoners looks how it feels: the humdrum area of Pennsylvania in which it takes place is always grey, often rainy, and more than a little run-down, with dingy apartment buildings and dilapidated homes handily signifying both poverty and moral rot. (The film was shot by Roger Deakins, who expectedly lends an unsettling beauty to the decay.) And like those predecessors, Prisoners envisions a recursive cycle in which those affected by violence are fated to one day visit that violence on others. Keller reacts to his daughter’s abduction by ruthlessly seeking out the man(child) he believes is responsible, and doing everything in his power to bring him his own brand of justice. His decision to do so is hardly a decision at all; he appears to be operating solely on instinct and adrenaline.

It’s strange that, for a film with more than one outwardly religious character (especially Keller himself), there’s almost no thought given to the moral weight behind a single action carried out over the film’s 153 minutes. Rather than an intentional show of cynicism, this reads as a simple lack of depth. The what and how of this case are exhaustively detailed by Gyllenhaal’s fastidious detective, but the why is barely even an afterthought—a rushed monologue delivered during the climax that’s tantamount to a comic-book villain gloating over his dastardly deeds. Sadly absent from all this is the evocatively impressionistic approach that Villeneuve brought to Polytechnique (2009), whose fragmented depiction of the 1989 École Polytechnique massacre in Montréal raises more disturbing questions about the nature of violence in 75 minutes than Prisoners does in more than twice the running time. Those who feared that Villeneuve’s Oscar-nominated Incendies (2010) was an unofficial Hollywood audition will see their fears more than realized here. What with the stacked ensemble cast (which also includes Paul Dano and perennial Oscar-grubber Melissa Leo), it’s as though Villeneuve is aiming for a sort of David O. Russellesque “actor’s director” status among his tony new collaborators. And while this is conducive enough to crafting some intermittently gripping set pieces, when one attempts to peel back the film’s layers it quickly becomes clear that it just doesn’t have very many.