Behind the Candelabra (Steven Soderbergh, US)

Jason Anderson/CS55, Currency, From The Magazine 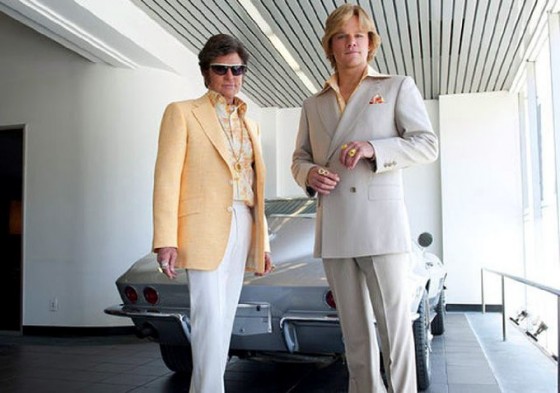 For all the delight it takes in displaying the hard, shiny surfaces of its celebrity subject’s beloved “Austrian rhinestones,” the luxury automobiles he buys on a whim, and gilded crap of every variety, Behind the Candelabra reserves its most ardent attention for a certain array of body parts. Indeed, three of them get especially memorable roles in Steven Soderbergh’s often acerbic, intermittently superb, and surprisingly empathetic drama about the five-year relationship between Liberace and Scott Thorson, a saga that somehow manages to synthesize a satisfyingly salacious showbiz tell-all, a decidedly toxic gay romance, and a cautionary parable about the possibilities and limitations of the flesh.

Alas, a cock is not one of those, which isn’t surprising given the traditionally hetero-male bent of the smut preferences of HBO, which commissioned Soderbergh’s not-quite-retirement film after the studios balked (its TV premiere fell a week after its Cannes competition slot). To be fair, for a same-sex love story starring two A-listers, the movie is about as frank as it could be. (Richard LaGravenese’s script is admirably faithful to its source, Thorson’s oddly poignant 1988 memoir of the same name.) Especially appealing is its lack of bashfulness in regards to late-life libido. Though the older half of this ill-starred couple is 57 at the onset of their relationship, Liberace cheerfully tells his young lover that he cured an earlier bout of impotence by getting an implant that equipped him with an apparently permanent erection. Clearly, the sight of this pre-Viagra miracle of science may have been too much for HBO viewers to take.

Michael Douglas’ eyes are undoubtedly more inviting than any regions to the south. They’re certainly meant to be. In his first major role since recovering from throat cancer (he’d previously reunited with his Traffic [2000] director for a small bit in Haywire [2011]), Douglas has rarely seemed as fully engaged in a part as he does as Wladziu Liberace (“Lee” to his intimates), the Wisconsin-bred ivory-tickler who became the highest-paid entertainer of his day thanks to his light-hearted repartee and deft handling of his pop-classical repertoire. (Reworkings of Liberace arrangements by the late Marvin Hamlisch are scattered across the film’s otherwise sparse soundtrack.)

Of course, the world has changed several times over in the quarter-century since Liberace’s death, and his enormous fame now seems as unlikely as it was undeniable. The idea that he could vigorously and successfully defend his just-waiting-for-the-right-girl cover story while being such a flagrant caricature of mid-century queeniness seems patently absurd, and Douglas is correct to regard the man as something far greater, wilder, and more complex than a figure of camp. His whole essence is in those eyes—a touch too lively, too ravenous. Always at his best in comedic roles, Douglas successfully evinces a mixture of self-bemused charm and lovelorn neediness when Liberace sets out to seduce Thorson, having already devoured him with those eyes during their first two encounters. Several years later, when things start going pear-shaped with the increasingly drug-addled Thorson, expressions of anger, fear, and loathing threaten to overwhelm the performer’s carefully cultivated demeanour. Douglas is less convincing as the man at his worst—nor can he get the smile quite right.

The second key body part is Matt Damon’s ass. Those perfect tan lines at mid butt cheek are a testament to the production’s impressive dedication to period detail, as well as its somewhat strenuous efforts to make the 42-year-old Damon plausible as Thorson, only 18 when he and Liberace first met in 1977. It seems vaguely miraculous that Damon’s face looks as buffed and smooth as that suspiciously boyish backside (was there CG involved?). Yet the gambit succeeds since Damon is so plausible as an object of delectation in the early scenes, such that Douglas’ eyes nearly pop out of his head like a cartoon wolf whenever he gets out of a hot tub.

What’s more interesting is how Thorson’s transformation by the middle of the film into a kind of living Ken doll suits the oddly characterless nature of Damon’s handsomeness. Given his laments about his “Play-Doh face,” Thorson is understandably susceptible to Liberace’s efforts to remake/remodel him. First he equips him with a wardrobe only slightly less audacious than his own. Then he pays for the plastic surgery to better harmonize Thorson’s features with the face of the younger Liberace, a gesture the film presents as less warped than sincerely loving. “My baby boy” is his favourite pet phrase for Thorson, and the film’s disinclination to sort out the confusion of roles that existed between the two men—client and hustler, father and son, Bluebeard and wife—becomes its most provocative element.

Nevertheless, the third bodily site of interest belongs to neither of its leads. Instead, it’s the freakish face of Rob Lowe, seen here as Dr. Jack Startz, the surgeon to the stars who’s quick to agree with Liberace’s plans for Thorson’s new look (he also provides the slimming pills that lead to Thorson’s drug problems). With his perilously high cheekbones and eyes stretched almost far enough to reach his ears, Lowe’s visage represents cinema’s greatest example of facial distortion since Katherine Helmond had her cheeks stretched taut in Brazil (1985). That Lowe can act at all with that weird mug confirms the skills he’s developed as one of the best assets on Parks and Recreation.

Including a one-time scandal-sheet regular like Lowe among Behind the Candelabra’s rich gallery of supporting actors points to Soderbergh’s casting savvy, one of the best things about the final stage of his career, evidenced by the presence of comedians like Patton Oswalt and Paul F. Tompkins as befuddled straight men to Damon’s nutjob in The Informant! (2009) and, of course, Magic Mike’s (2012) mighty McConaughey. Here we’re treated to Scott Bakula as the walrus-mustachioed boyfriend who first introduces Thorson to Liberace, 30 Rock’s criminally underused Cheyenne Jackson as Scott’s soon-to-be-discarded predecessor in Lee’s bed, and a never-gaudier Dan Aykroyd as Lee’s manager. (A link to the film’s real-life subjects is provided by Debbie Reynolds, who actually socialized with the couple.) Nearly as unrecognizable as Lowe is Nicky Katt as Thorson’s drug connection; his few scenes here are a vital reminder of how exciting the actor’s motormouth routine was in his earlier days as a Soderbergh company player in The Limey (1999) and Full Frontal (2002).

Yet despite the colourfulness of the people at the periphery, Behind the Candelabra essentially remains a two-hander, and an unmistakably unhappy and dyspeptic one at that. Presenting love as a system of exchange in which the recognition of mutual needs eventually leads to resentment and finally open warfare, it takes a view of romance that’s caustic even by Soderbergh’s standards. (The most savage scenes here play like the marital breakdown in Schizopolis [1996] stripped of any defensive irony.) Soderbergh and LaGravenese take pains to emphasize the acute sense of social isolation that marked Thorson’s account. Fiercely protective of his privacy and his officially hetero public image, Liberace was not one for social calls as soon as he was offstage. (LaGravenese’s script includes Liberace making a flippant remark about how the two should spend more time with Charo, but Thorson considered her one of their only true friends in Vegas.) The claustrophobic sensation of being trapped in these pointlessly opulent rooms as the two lovers claw at each other is suggestive of another of Soderbergh’s beloved ’70s reference points: if Magic Mike was his Shampoo (1975), this is his Bitter Tears of Petra von Kant (1972).

While the decline of the central relationship contributes to a loss of shape and momentum in Behind the Candelabra’s back half, the film is still one of Soderbergh’s most potent attempts to prove that a star-laden Hollywood drama can simultaneously boast artistic flair, adult complexity, and populist appeal. The fact that dramas of this stripe have become routine for American cable television is confirmed not just by Behind the Candelabra’s ratings hit for HBO, but the recent reports that Soderbergh may soon team with Clive Owen for a Cinemax show. Since the director’s oscillation between the roles of reliable studio craftsman and headstrong indie iconoclast has been one of the only constants in his film career, it’ll be interesting to see what happens if he actually finds a haven.