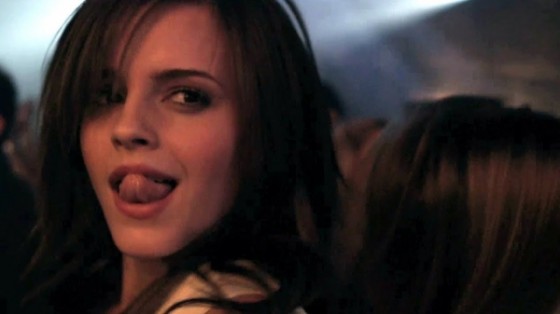 Taking its title from Steely Dan’s barbed, the-kids-aren’t-alright tract “Show Biz Kids” and its plodding, piano-driven beat from Elton John’s “Benny and the Jets,”  Frank Ocean’s single “Super Rich Kids” is a wasted daydream of (literally) high-living largesse (“Start my day up on the roof / There’s nothing like this kind of view”) spun by a protagonist who suspects he’s about to fall through the floor. “Close my eyes and feel the crash,” croons Ocean’s coked-out narrator at the climax, as if inviting the ground to rush up and meet him halfway down his 60-storey drop. Lushly produced and adorned with a flat-lined rap verse by Earl Sweatshirt, “Super Rich Kids” simultaneously diagnoses and disseminates an infectious strain of Sunkist SoCal ennui whose major symptom is a kind of comfortable numbness.

Splashed over the end credits of The Bling Ring, the track ends up doing a lot of Sofia Coppola’s heavy lifting for her. It’s not the first time that the hipster-affiliated director has opted for pop shorthand: recall the jagged chords of Gang of Four’s “Natural’s Not in It” heralding the idle-classes portraiture of Marie Antoinette (2006) (“The problem with leisure / What to do for pleasure”) or Scarlett Johansson’s deceptively offhand and fetchingly bewigged Chrissie Hynde vamp in Lost in Translation (2003), the perfect karaoke selection for a movie about chronic pretenders trying to keep it real. In The Bling Ring, however, the inclusion of “Super Rich Kids” on an already hit-filled soundtrack (Sleigh Bells, Phoenix, and a double shot of Kanye West) is more than cute: it’s an attempt to let Ocean’s richly imaginative songwriting prop up generally unpersuasive filmmaking.

Following the film’s dismal bow at Cannes, the scuttlebutt was that the source material—Nancy Jo Sales’ 2010 Vanity Fair feature “The Suspects Wore Loboutins,” about a gang of Hollywood Hills teenagers who systematically burglarized the homes of absentee show-biz A-listers —was a little too snug a fit. Drawn like a moth (or a gadfly) to deluxe digs, from Versailles to the Chateau Marmont, Coppola the Younger has never sought to conceal her commodity fetish (but then neither has that vulgar faux-teur Michael Bay, whose Pain and Gain is The Bling Ring’s alpha-male doppelganger). The loosely covetous vibe of Coppola’s filmmaking, the way she often imbues designer objects with tangible, desirable presence, has increasingly made her a target of skepticism and derision. So it’s hard not to smile when, barely three minutes into the movie, she places her own onscreen credit over a shot of a designer necklace whose glittering letters read “Rich Bitch.”

This is the funniest authorial scrawl since Joseph Kahn’s literally vomitous credit in Detention (2010), a blink-and-miss-it sight gag baiting critics who dismissed Lost in Translation and Somewhere (2010) as nothing more than the whinging of a privileged Hollywood scion. No less than Lena Dunham—or, while we’re at it, Noah Baumbach—Sofia Coppola has become and/or styled herself as a limit case for that old authors-workshop chestnut:  “Write what you know.” And if that knowledge concerns the anomie of lounging wearily in business-class suites, expect that class-warrior film critics will waste little time pointing out that fact. Whatever the argument for or against using an artist’s upbringing and subsequent tax bracket against their work—even and/or especially if the work seems to reflect that life experience—in Coppola’s case, it’s unlikely that the haters are going to be mollified under any circumstances.

Not that The Bling Ring is much good as a conversion tool. It’s not Coppola’s worst movie—Marie Antoinette remains this Sundance Kid’s definitive misstep, its prefab, Baz Luhrmann-esque “audacity” undone by its lazily neurasthenic presentation—but it’s probably her most superfluous. Even for a filmmaker who specializes in ephemerality, this is lightweight stuff. If Coppola has a major talent, it’s for creating and sustaining uniquely breathable onscreen atmospheres: moistly poisonous suburban breezes in The Virgin Suicides (1999), dank, echo-chamber chill in Marie Antoinette, buzzy, hotel-air-conditioner suffocation in Lost in Translation and Somewhere (the latter of which had a nicely sunblind look courtesy of the late Harris Savides, who gets a co-cinematographer credit on The Bling Ring, and a dedication as well). The Bling Ring, though, is mostly airless: it’s like watching a movie playing out under glass.

This lepidopterist’s gaze does take in a few diverting sights here and there. In Coppola’s sole coup de cinema, we watch from an Olympian perspective as Marc (Israel Broussard) and Rebecca Lee (Katie Chang), the ringleaders of the underaged home invaders, methodically raid a mansion whose transparent outer walls give it the look of a massive hilltop jewel case. Despite this distancing effect, this single-shot sequence is the only passage, in a movie about the invasion of privacy, to generate any kind of illicit charge. Elsewhere, scenes of Marc, Rebecca, and their fellow high-school-aged malefactors (including Emma Watson as the most calculatedly vacuous of the bunch) hopping fences and slipping through glass sliding doors are cloaked in starless, smoggy darkness, effectively blotting out any thieves-in-the-night lyricism.

It’s when she gets to the interiors of these easily burgled fortresses that Coppola trips up, however, and not only because there’s so much chunky stuff scattered underfoot.  In scene after scene, we watch the characters greedily rifling through the vanity tables and walk-in closets of various TMZ staples (including an interlude actually shot in Paris Hilton’s digs), pausing to pose and preen before making off with the loot. The spectacle is akin to children playing dress-up with their parents’ stuff; the movie’s thesis seems to be that in the absence of engaged, perceptive grown-up role models, Marc and Rebecca’s crew displace both their imitative urges and their need to please onto celebrity surrogates. “Pedestrian Access to Hollywood Way” reads a street sign glimpsed late in the film—a literal bit of thematic signposting that at least gets subtlety points for being tucked away at the far right of the screen.

As armchair psychologizing goes, this is credible enough, and yet at no point does Coppola give us a reason to care: not about the thieves, whose hedonism and avarice aren’t given any especially deep gradations  by either the filmmakers or the actors; not about their parents, whose obliviousness is just a punchline (cue Leslie Mann as a birdbrain yummy-mummy who uses The Secret as a home-schooling Bible); and certainly not about the burgled celebrities, who are used mostly as sinister structuring absences. The implication is that the stars’ vanity in leaving their valuables lying around behind unlocked doors means that on some level, they’re merely getting theirs. The pop-culture-vultures are coming home to roost, and they might as well score some Rolexes while they’re at it.

Coppola’s serene detachment from the whole affair rings true to her subjects’ lightly narcotized worldviews—her tightly constricted compositions are the aesthetic equivalent of Adderall—but the blitheness quickly shades into indifference.  In The Social Network (2010), a clear influence on The Bling Ring’s screenplay (right down to the intermittent flash-forward interviews in deposition and courtroom settings), David Fincher and Aaron Sorkin demonstrated how the sudden conflation of two primal urges—adolescent yearning and class envy—reconfigured global interpersonal communication. The clash between Fincher’s impeccably affectless filmmaking and the world-historical import of the story’s events had a compelling tension; Coppola, meanwhile, stays localized and manageable, her grasp easily exceeding her reach. Not only is she writing what she knows, but it’s also something that everybody else—including, arguably, the Bling Ringers themselves—have long since figured out in this post-Gaga zeitgeist: that the Fame Monster is an insatiable carnivore.

Whether inadvertently or implacably, The Bling Ring feeds the beast by gifting its subjects with the docudrama treatment, and its commercial success seems assured by the conspicuous presence of the very brand names its characters lust after. The movie is smoothly calibrated (and is being smartly marketed) as an art-multiplex moneymaker. A comparably mercenary instinct underpinned Spring Breakers, but, its dubious status as a Twitter-ratified masterpiece aside, Korine’s is a movie that forces the viewer to question what it’s doing at any given moment; whether it’s a jeremiad, a joke, or a forty-year-old’s virgin-objectifying jerk-off is a matter of perception and critical engagement, which the film unmistakably demands and arguably rewards. One may conclude that, in the end, Korine isn’t really saying much of anything, but there are enough odd inflections and intonations in his spiel that it begs to be parsed. The Bling Ring is more of a room-tone movie, key of “ambient cynicism”—it’s hard to make out any relevant opinions or attitudes through the even, faintly hectoring drone. Even if the tone is a little too spiky to be taken for mere mute acquiescence to the social conditions it describes, it’s not full-throated enough as either a celebration or a denunciation. This is not the mellifluous subtlety of “Super Rich Kids,” a ballad of Gatsbyan excess that honours F. Scott Fitzgerald by managing to hold two competing thoughts in its mind at the same time. Rather, it’s the middling statement of a filmmaker who doesn’t seem to have thought overmuch about what she’s doing.