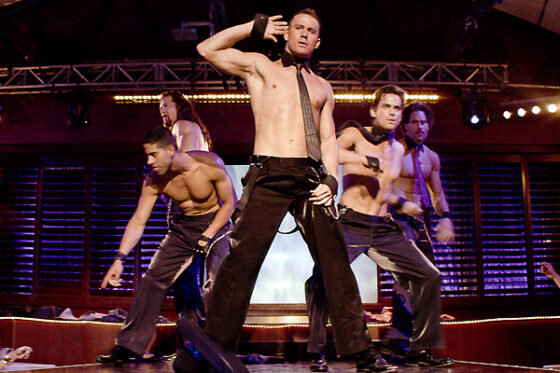 “Let’s fucking get it on right now.” So begins Magic Mike, the distinctive Southern drawl of Matthew McConaughey intoning over a black screen followed by a swift cut to our man’s leather-encased rear thrusting vigorously towards a cheering, all-female audience. From this slam-bang opening, it would seem that Steven Soderbergh’s much-anticipated exploration of the world of male stripping is aiming to unapologetically live up to its fevered, bachelorette-party hype, giving its salivating target audience exactly what they want: oiled abs, tight buns, and facile notions of heteronormative female desire. By film’s end, however, it’s clear that McConaughey’s opening hip propulsions say more than one would initially have thought: directed away from us and towards a hazy, out-of-focus audience, they’re a fitting analogy for a film that lacks any driving force or unifying purpose.

Magic Mike takes its place as the third part of an unofficial Soderbergh trilogy of pseudo-star vehicles, on the heels of The Girlfriend Experience (2009) and Haywire (2011). While much of Soderbergh’s output in the last decade-plus has hinged on star power—George Clooney and Jennifer Lopez in Out of Sight (1998), Julia Roberts in Erin Brockovich (2000), Clooney, Roberts, Brad Pitt and Matt Damon in the assorted Oceans, Benicio del Toro in Che (2008), Damon, Gwyneth Paltrow, Jude Law and Marion Cotillard in Contagion (2011)—this new triptych functions quite differently, giving their rather straightforward dramatic or generic material an intriguing boost by harnessing the extra-cinematic resonance of their respective leads. The casting of porn star Sasha Grey in The Girlfriend Experience was not (or not only) a means to bring some exploitative “verism” to its story of a high-end NYC escort, but a slyly subtextual means of highlighting the film’s musings on bodies and bodily exchange as commodities, how we market (and manage) ourselves in a financial crisis. Casting mixed martial arts champion Gina Carano as a mercenary in Haywire, Soderbergh was not only able to mobilize her extraordinary physicality for numerous long-take, nearly real-time action sequences—extended foot chases through city streets, acrobatic leaping over rooftops, and a hotel room set-to where Carano quite convincingly crushes Michael Fassbender’s face between her thighs—but, by surrounding his novice lead with such instantly recognizable male stars as Fassbender, Ewan McGregor, Antonio Banderas and Michael Douglas, he established an interesting (gendered) contrast between two different kinds of performative assurance: Carano’s physical grace versus the lads’ effortlessly professional, laid-back acting chops.

Loosely based on the year that its star Channing Tatum spent stripping in his late teens, Magic Mike ostensibly follows in the same footsteps as its predecessors in seeking to redefine contemporary screen masculinity through Tatum’s pumped-up corpus. Following our opening view of McConaughey’s rear—though in the film’s narrative context said ass belongs to Dallas, the Xquisite strip club’s owner and patriarch—we find Tatum’s nude caboose on display as the star stretches out over a bed, joined shortly thereafter by Olivia Munn’s breasts. A party boy (or man-child at the age of 30), “Magic” Mike is a self-described “entrepreneur,” running several cash-only businesses and dreaming of designing reclaimed furniture while working the stage at Xquisite as Dallas’ prodigal son. When Adam (Alex Pettyfer), a college dropout crashing on his sister’s Brooke (Cody Horn) couch, finds his way on to Mike’s construction site, Mike takes the younger man under his wing and introduces him to Xquisite, where Adam soon joins the thong-clad fold. Brooke disapproves of her brother’s new vocation and is wary of Mike, though is eventually won over by his charms. Adam, meanwhile, predictably gets mixed up in drugs, falls for the wrong kind of women—silent waifs with teacup pigs for pets should evidently never be trusted—and literally buys into Xquisite, investing in the club’s relocation to Miami while now-lovebirds Brooke and Mike seek to leave the neon lights and baby oil behind.

While Tatum’s success as a mainstream male lead certainly does not give him the same outsider allure as Grey or Carano, his malleability (while retaining that same chiseled physique) makes him an interesting screen specimen. Thus far he has played weepy-romance heartthrobs (Dear John [2010], The Vow [2012]), two very different kinds of alpha-male soldiers (Stop-Loss [2008], G.I. Joe: The Rise of Cobra [2009]), a gangster (Public Enemies [2009]) and a comedic lead (21 Jump Street). But his rise to fame was due to Step Up (2006), where he garnered notice for his fancy footwork—not the conventional route to male superstardom. Strategically navigating his screen persona between teenybopper crush, gay fixation and burgeoning mainstream star, Tatum and his career trajectory suggests a shift in the way contemporary male movie icons are made and understood—and it’s precisely this point that Magic Mike fails to explore.

Explicitly establishing Tatum and his fellow washboard-abbed co-stars as objects to be looked at, Soderbergh ultimately fails to find a means of exploring the nuances of this reversal of the erotic gaze. The dance numbers, filmed largely in master to medium shots as the rock-hard bodies of Tatum and the rest of the Xquisite crew undulate their bare asses while often non-diegetic music blares, never establish a proper perspective on the action; neither positioned as the club audience’s in-the-action POV nor the theatre audience’s privileged point of view, it seems as of was the camera was simply placed before the stage and left to roll. The scene where Brooke finally comes to watch Mike perform at Xquisite might have provided the critical or perceptival edge that the film needed, as the cuts between Mike’s performance and Brooke’s judgmental reactions to the wildly cheering female audience begin to hint at a broader spectrum of reaction to the male spectacle on display. However, this is quickly undercut by the performance montage that follows, which emphasizes the ridiculous comic aspects of this male burlesque, hammering the point home with a “fat chick” joke as Big Dick Richie (Joe Manganiello) throws out his back lifting a particularly hefty customer.

Most importantly, none of these questions are explored visually when Tatum takes to the stage solo, a key moment in his character’s development as Mike seeks to break away from Dallas. Soderbergh fails to capture the power or allure of Tatum’s movement, at one point even cutting beneath Tatum to film him through a glass floor, a lazy, music-video parlour trick. Dance, the lynchpin of Tatum’s stardom and our understanding of the new cinematic male body he represents, constantly evades Soderbergh’s camera. Had the film felt more conceptually complete, it could be argued that this is precisely Soderbergh’s point; but judging by the limp result on the screen, it feels that this is merely the by-product of a speedy production, hurried through to the editing room and crunched out in time for a summer release.

While the film may be read as a dual biography—Adam being one direction Tatum could have gone, and Mike the path to mainstream, “normal” success—this is lost in the film’s various sub-plots and other scattered, shallowly explored preoccupations: the recession, the strained flirtation between Mike and Brooke, and the utter perfection of McConaughey’s turn as Dallas (which does involve bongos). The conclusion, which leaves Adam’s life unresolved as he leaves for Miami, feels less like a conscious choice than a result of the film backing itself into a narrative corner and production needing to wrap. In a similar vein, the film’s final sequence of Mike leaving Xquisite to go to Brooke is unsatisfying in its predictability. Ultimately, Magic Mike comes across as a pastiche of Soderbergh’s other films, from the clubs, to the prolonged scenes in cars, to the undeveloped plot referencing the economic crisis. While it is based in a kernel of a potentially compelling idea, Magic Mike feels rushed, unplanned and—pardon—half-assed.