Andrew Tracy/CS52, Currency, From The Magazine 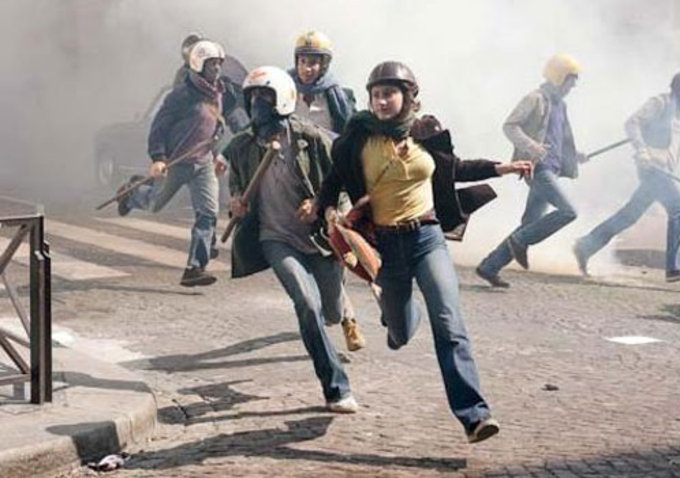 As one is virtually a companion piece to the other, it is only natural to begin discussion of Après mai (Something in the Air) with Olivier Assayas’ 2002 memoir A Post-May Adolescence, just published in an elegant English translation by the Austrian Filmmuseum to accompany their new, Kent Jones-edited anthology on Assayas. Eloquent and thoughtful, Assayas’ remembrances of coming of age during the long, dispiriting hangover from May ’68—the “years of lead” during which the radical left lost its momentum in the face of a reinvigorated mainstream consensus, its massed forces drifting away while the remainder responded with an ever more divisive ideological rigidity or, at the furthest edge, the nihilistic impotence of terrorism—is nostalgic absent the accompanying sentimentality. This allows Assayas to not only speak hard truths about the time, but to avoid the knee-jerk condemnations of the leftist movement so common from recanted soixante-huitards (or post-soixante-huitards). Self-confessedly something of a coaster on the receding waves of revolt (“my largely anecdotal career as a Leftist,” as he says), Assayas attests to the power of image—in some cases a decidedly reactionary kind of image—in attracting youth to the movement. He recalls his admiration for the tough, non-ideological militancy of the Katangai squatters, and even now professes “a certain, instinctive sympathy” with the Red Army Faction and its analogues, for at least having the “lucidity” to grasp that action was the sole remaining proof of life for a movement that had reached its point of disappearance.

Lucidity, indeed—though of a considerably more productive order—is one of the two poles of Assayas’ intellectual and aesthetic position. Fuelled by the not-yet-canonical Homage to Catalonia and Orwell’s brand of anti-totalitarian Leftism and relentless moral clarity, Assayas reserves his greatest scorn for those Stalinist and Maoist adherents who refuse to acknowledge the evident truths about the regimes to which they adhere, deriding Solzhenitsyn’s Gulag Archipelago or Simon Leys’ 1971 exposé of the Cultural Revolution as CIA propaganda. (Assayas has his onscreen vicar reading the Leys book in a scene midway through Après mai, eliciting just such a charge.) “I have never hated anything as much as I loathe wilful blindness to reality, the denial of fact, ideological madness and the distortion of the world,” he writes. Curious (or appropriate?), then, that his other intellectual position is premised precisely upon a transformation of that reality; or, rather, an unveiling of the actual real behind that surface we are conditioned to call “reality.” “[There is] a moment when oneself is not much more than a tissue of intuitions and potentialities in search, less of a template that would allow us to read reality, than an angle, a point from which to see it in such a way that it renders up the meaning we knew without knowing[,] opening for us where previously it had only been closed,” writes Assayas. “Situationism was to be this point for me.” For Assayas, the Situationist notion of art as social practice is embodied in the process of filmmaking, which itself is “a double movement: the one the embodiment of writing—more intimate, the part where meaning takes shape—the other of action, where, precisely beyond meaning, through day after day of shooting, the fragments of a total art practice inextricably entwined with reality take shape.”

While one should always take filmmakers’ readings of their own practice with a healthy dose of scepticism, Assayas’ eloquent pronouncement may indeed help account for the elusive, light-fingered nature of his auteurism, a distinctiveness that is at least partially defined by self-effacement. Accordingly, Après mai’s nostalgia trip is oddly free of self-indulgence: from scene to scene, Assayas strikes a remarkably sustained balance between bittersweet remembrance and distanced reportage. The almost inescapably teleological imperative of all autobiographical fiction is balanced here by a curious yet disinterested observation of people in the moment. So many narratives of the radical era depict it as a delimited region of time, a fixed temporal entity to be grown into or out of; for Assayas, it is an impress that indelibly marks its eager young material, but also adheres to their own particular contours.

Certainly not the makers of their time, Assayas’ alter ego Gilles (Clement Metayer) and his proto-militant cohorts—the dispossessed heirs of an almost-revolution, fighting to prolong its dying reverberations—are neither its passive symptoms. While the film’s early movements adhere, competently if unremarkably, to the template of other circa ’68 tales—a street battle against les flics, cell meetings, and leaflet distributions, all anchored to our young hero’s blossoming relationship with the idealistic young Christine (Lola Créton) after he receives a Dear Gilles missive from his vacationing girlfriend, the moneyed, long-tressed goddess Laure (Carole Combes)—it begins to reveal its true, fissiparous shape after Gilles and company hit the road for summer vacation, following a serious incident during a confrontation with the school’s “fascist” security guards. Heading down to Italy, meeting and crashing with fellow travellers along the way, the expanding and contracting group begins to feel out the diverse possibilities afforded them by the combinations of their political convictions and personal inclinations. Assayas, while still keeping Gilles as the locus of his story, begins to disperse his subjectivity, and his sympathies, along these variously diverging paths: Gilles’ increasing, distressingly “bourgeois individualist” commitment to painting and illustration, allowing Assayas to pay brief homage to Bresson’s Quatre nuits d’un rêveur (1971); a journey of spiritual self-discovery in India undertaken by Gilles’ fellow artist friend (echoing Assayas’ own teenage sojourn there); Christine’s collaboration and eventual cohabitation with the leader of a militant filmmaking collective; the progressively harder-line militancy of another comrade, who tries to recruit Gilles for an act of political terrorism. Adjacent to these ideological iterations is Gilles’ nocturnal reunion with the returned Laure, who has fallen into a world of apolitical, hard drug-fuelled bohemianism that yields another of Assayas’ lyrical party sequences in a palatial country house—though this one with an unexpectedly conflagratory conclusion.

With none of these threads does Assayas identify the “correct” or “incorrect” response to the legacy of May. Without scanting the anomie and lack of direction that the restitution of “normality” wrought on those too young to participate in the original upheaval, Assayas intimates that the true “outcome” was precisely the sum of the innumerable individual trajectories that trailed away from that moment of extraordinary, revelatory collision. As with Philippe Garrel in Les amants réguliers (2005)—the obvious/inescapable point of comparison—Assayas in Après mai is concerned to show the persistence of the post-May moment (for what is life but persistence), and that the dissolution of the movement was as much a transformation of its impetuses as it was, perhaps, a defeat. Yet while it’s easy to commend Assayas’ lack of editorializing, it also contributes to a certain lack of affect. Whereas Garrel’s dreamy yet rigorous formalism in Les amants created and sustained a narcotic thrall throughout its lengthy running time, Assayas’ clipped, elliptical briskness keeps his young devils (probably) at a remove that, this time, is more pictorial than dramatic; they’re objects to be regarded rather than the scattered, imperfect, overflowing beings that, as much as anything, is Assayas’ signature.

But just as L’heure d’été (2008) gave the appearance of a polite French art-house export while subtly evolving into something more complex and irresolvable—a cunningly modest form of Situationist détournement, one could say—Après mai grows larger, and closer, in the rearview. As the film enters its final movements, with Gilles working on a film set in London and haunting avant-garde screenings in his off hours, Assayas refuses his young vicar a conclusion (or even a definite direction) to his sentimental education. Even as his path becomes clearer, Gilles remains bound to a yearning extraneous to his “natural” progression and self-realization. It was this inchoate longing that drove both May and the long post-May, and as Assayas elegantly attests in his final sequence (the film’s one rupture from realism), it is a longing both impossible to encapsulate in fleeting material reality and impossible not to see as such, beckoning just outside of one’s grasp.

Andrew Tracy, Après mai, Olivier Assayas, Something in the Air