And Everything Is Not Going Fine: Steven Soderbergh’s Side Effects 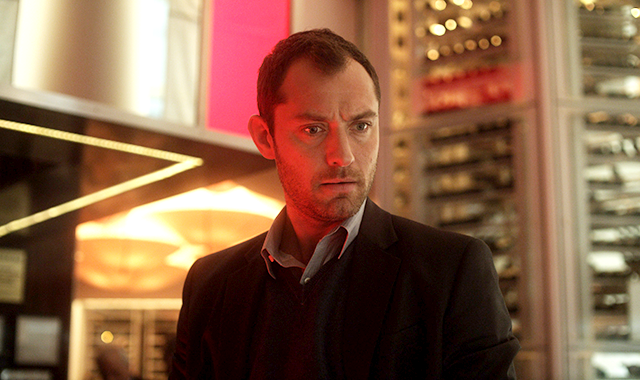 Critics arriving late to press screenings of Steven Soderbergh’s Side Effects were greeted by an unusual sign: “Dear Invited Guest, due to the non-linear nature of this film, it would be unrewarding for you to enter at this point. We look forward to welcoming you at the next screening. Best regards, The Filmmakers.” In this case, “non-linear” means a two-shot teaser for the film’s second hour: a long zoom in from a rooftop-viewed cityscape towards an apartment window abruptly interrupted by a slow track back from that window from the inside, the camera then swivelling to follow a trail of blood that leads towards a toy sailboat and a gift box resting on a chair. It’s a momentary flourish in an otherwise visually stripped-down film, echoing Brian De Palma’s Femme Fatale (2002) in the way a zoom seemingly embarked on for its own languid pleasure becomes an urgent narrative hint. Where in Haywire (2011), Contagion (2011) and Magic Mike (2012) Soderbergh ostentatiously flattened and abstracted space into gleaming, sharp-angled quadrilaterals, in Side Effects he mostly preserves pre-existing depth and dimensions—a relative visual sobriety that belies a story heavy on cartoonish conspiracy and improbably knotty plot twists. The insistent, “non-linear” convolutions of Scott Z. Burns’ script provide a weak foundation for what Soderbergh evidently intends to be a broadside against a panoply of corrupt American institutions (medical, financial, journalistic) and a sort of catch-all national diagnosis and reproach.

Three months before that opening tease, Emily Taylor (Rooney Mara) waits for her husband Martin (Channing Tatum) to be released from prison following a little bit of white-collar malfeasance. (“To a lot of people you say ‘insider trading’ and it might as well be murder,” Emily complains to her boss—a notable early example of the blunt parallels and portentous foreshadowing that recur throughout Burns’ screenplay.) Martin’s arrest had sent Emily into a disastrous downward spiral, financial and mental: house, car, and health insurance had gone out the window, while intense depression had driven her into therapy, which she found “helped with the hopelessness.” Rather than helping, however, Martin’s return only exacerbates that hopelessness. Wracked by ever-worsening depression— manifested in mild hallucinations, crying jags, lack of sex drive, suicidal urges, and public freak-outs—Emily finally rams her car into a parking garage wall in an impulsive suicide attempt that results in a potential concussion.

Remanded to psychiatric care, Emily is assigned to handsome, upwardly aspirant Dr. Jonathan Banks (Jude Law), who, following his financier wife Deirdre’s (Vinessa Shaw) recent downsizing, is overextending himself in private practice, hospital shifts, and as an expert witness for the state in an effort to take up the financial slack. For both the Bankses and the Taylors, money is quick to evaporate, and Soderbergh contemplates the parallels between these two couples’ economic positions and ambitions at length. Doubling down on the duo in Soderbergh’s The Girlfriend Experience (2009)—wherein Sasha Grey’s high-class call-girling functioned as an illicit mirror of her boyfriend’s client-trolling as a much in-demand personal trainer—Side Effects portrays two couples whose struggle to maintain their precarious perch in the lower upper classes blinds them to wider class realities, while Emily’s determination to shed any residual traces of lower-class gaucheness evokes Tatum’s ladder-climbing in Magic Mike.

Banks prescribes Emily the drug Ablixa, which was recommended to him during a brief meeting with Emily’s former shrink Dr. Siebert (Catherine Zeta-Jones), who even has a promotional pen on hand. While treating clinical depression is frequently a trial-and-error process, Ablixa is not reputed to be any more dangerous than comparable remedies, and for a time it seems to alleviate Emily’s symptoms—but when Emily and Martin finally have a bout of vigorous intercourse, the ominous minor chords in Thomas Newman’s score deliver thudding premonitions of bad news. (Readers who want to avoid all spoilers should stop here.) With the restoration of Emily’s sex drive comes episodes of sleepwalking—and during one such episode, Emily unconsciously stabs Martin to death.

As prescribing physician, Dr. Banks’ credibility, and attendant earning power, are on the line. Looking to salvage both, and to shift responsibility off himself and on to the drug, Banks opts to risk his income stream as an expert witness by taking the stand in Emily’s defense, arguing that she acted without consciousness and describing her as “a victim of circumstance and biology.” It’s telling that no one seriously questions the credibility of a defense based on the premise that an under-tested prescription drug led to sleepwalking murder; indeed, the frequency of such outré side effects (news reports of other people committing homicide in their sleep are read out loud during defense preparations) serves as a soberingly familiar indictment of a weakly regulated industry where the profits to be made from under-tested medications outstrip potential billion-dollar penalties, making the latter an acceptable cost-of-business proposition. (One of the drugs that Banks prescribes for Emily is Depakote, whose maker Abbott Laboratories’ illegal direct marketing to medical professionals resulted in a $1.5 billion fine in 2012—only the third-largest such settlement in the history of the industry.)

The good doctor’s gambit doesn’t pay off, however, and in a neat reversal of Contagion, where Law’s unscrupulous conspiracy-theorist blogger cheerfully fanned the flames of global panic, his Banks falls victim to blogosphere savagery and hack-journalist hysteria (“PILL KILLER” shrieks one representative headline). His career in tatters, Banks becomes obsessed with uncovering any evidence that might absolve him of responsibility, his pathological investigation and reconsideration of every facet of his life in the last three months playing like a parody of Zodiac’s (2007) information overload. Banks’ paranoia is unexpectedly productive, however, uncovering a rather unwieldy conspiracy whose patent implausibility is nevertheless supposed to serve as the film’s final, damning indictment of our Pervasive Culture of Greed.

By film’s end, there’s not a single ethically unquestionable character left in Side Effects, and the closing zoom out from a psychiatric institution, mirroring that opening shot of anonymous apartment windows, seems to be suggesting that every economically ambitious city-apartment dweller is an inmate in a gigantic lunatic asylum. In broad outline, Side Effects’ wholesale condemnation of a country on the take on every level is reminiscent of a jeremiad like Fritz Lang’s While the City Sleeps (1956), in which journalists, police and murderers are all revealed as equally egregious violators of the social contract. But the po-faced ludicrousness of its central conspiracy simultaneously invalidates it as either scabrous social critique or disposable, cheerfully sordid thriller. Taking little glee in his film’s ultimately tawdry transgressions and evincing none of Lang’s grimly acidulous pleasure at the spectacle of avaricious human nature remorselessly exposed, Soderbergh in Side Effects is so angry that he not only loses sight of his target, but finally loses his grip on that pleasurable efficiency which had come to be his films’ lowest common denominator.