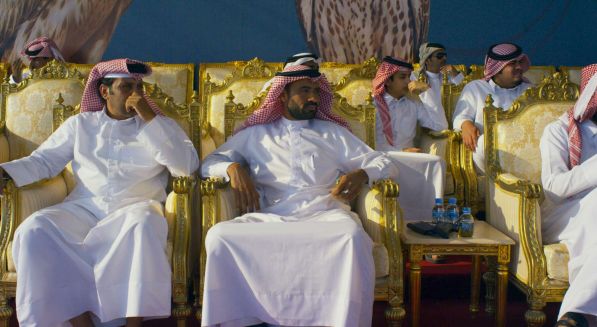 With its boldly stylized design, looking otherworldly but extracted from the all-too-real, and replete with excess—not least a purring pet cheetah lounging on ornate carpet and riding in a luxury sports car, and a brotherhood of Muslim bikers astride sparkling choppers—The Challenge could double as a wayward film-festival advert. Yuri Ancarani’s Filmmakers of the Present Special Jury Prize winner is embalmed in a garish yellow colour scheme, not unlike Locarno itself come festival time. The garish artifice evinced by the film’s production stills owe more to its chosen milieu than its mise en scène, a compositionally stark, visually expansive rendering of an ancient treatise, De Arte Venandi cum Avibus (On the Art of Hunting with Birds), manifest in the modern Arab world. The gloss of the Festival del film Locarno not dissimilarly disguises the more daring content that lies within: while icons are trotted out nightly on the Piazza Grande, a future wave is simultaneously being incubated within the Concorso Cineasti del presente; indeed, such challenges are presented throughout the festival program.

In The Challenge, the seemingly archaic sport of falconry, and perhaps more conspicuously its desert culture of devotees in the UAE, is treated to an abstract ethnography by the Italian artist known for his documentation, in typically broad strokes, of ritualized gesture and choreographic labour (San Siro [2014] explored the industrial anatomy of Milan’s sporting temple; Il Capo [2010] witnessed a marble quarry under excavation by machine and a lone “chief” conductor in the Apuan Alps). Grounded in observational realism, yet strangely plush in its austerity, the nominal tale of a Sheikh falconer travelling to Qatar for a weekend tournament becomes a hypnotic study in contrasts: the wild and the tame, the gilded and the barren, ennui and excitement, technology and nature.

The sense that The Challenge intends to give an arching expression to the prestigious history of falconry among aristocracy—alluded to in the opening scene’s bombastic score—is soon dispelled by an underlying feeling of banality, materialized in deliberately framed images of robed men idling on their cellphones, or in new SUVs that tread the burnt sienna desert. (The personification of vehicles becomes something of a cherished motif of the film, conceived of equal parts Walter Hill and Jacques Tati.) The manning of falcons provides the ritual proceedings with incidental intrigue—the film is clearly more interested in the peregrine nature of humans—though such informative minutiae as the birds’ donning of fitted leather hoods reads perilously close to a symbolic sight gag for the viewer but ultimately not the inscrutable practitioner. Still, The Challenge excels in tapping the particularly uncanny sensation of a blinded bird perched inside of an aircraft mid-flight. Ancarani’s strain of desert anthropology depersonalizes its subjects at the expense of a universalizing view, the timelessness of the landscape belittling the endeavours of men. The film baits the mythic with the mundane. The technological leashing of the feral presents its own sublime paradox, just as vicarious hunting in the absence of any discernible appetite provides us with a curious look at the wages of satiability, a model of our own modern existential “challenge.” Less severely, the film’s pageantry strikes an unforced semblance, sans birds, to the weekend culture of American sporting events and arena-rock parking lots. Exoticism is purely contextual.

Swap the falcon’s prey of pigeons in the Qatari dunes for the Norway rat in the streets of Baltimore, or the spectre of a historically infamous Native American on the run in the palm desert of California and a sidelong inquiry into communities both natural and engineered begins to emerge, in Rat Film and Pow Wow respectively. Companion films—slotted in the festival’s vital Signs of Life section—both investigate their peculiar habitats by unconventional means, eschewing the condemnable tone of so many urban and suburban dystopian critiques while allowing for multivalent sources to articulate the film as a site more than a subject.

Robinson Devor’s Pow Wow concerns, in a digressive fashion, a host of desert denizens residing in the Coachella Valley—where country-club golf courses are abutted by Native land, the earth alternately parched or verdant with irrigation—who deliver a collective oral history of this frontier in all its contradictions. The speculative and specious sense of truth echoes the liberties taken by the film’s latent source material, Harry W. Lawton’s 1960 book Tell Them Willie Boy Is Here (and the subsequent Abraham Polonsky film starring Robert Redford), about the famous manhunt of a Paiute Indian on the run. The film’s lone Native voice, a Cahuilla man, recounts without irony how family members were enlisted to play Natives in the film. The peregrinating POV gathers, through rather random sampling, the cultural vestiges of the legend passed through generations; in one iteration, it appears to live on as a country-club drinking diversion, with whites adorning feathered headdresses, riding golf carts drunkenly into the dusk. Aerial pans reveal a modern suburban wilderness subdivided and scored by competing histories, while faux chapters attempt to map the “adaptive strategies” of the people of the desert empire. There’s plenty of irony to mine in the plaid-pants lifestyle and retiree mindset, but the tone remains circumspect (there are dead bodies found amid the palm groves, after all), and the results inconclusive, as if Devor got necessarily lost looking for his thesis but wisely kept the camera rolling.

Theo Anthony’s debut Rat Film repurposes the proverbial dictum of a 50-foot wall: show me a three-foot garbage can in Baltimore and I’ll show you a rat that can leap an inch higher, so the film begins. Not merely pest, pet, snake food, or science study, the rat becomes conveniently symbolic of that which has historically troubled the city to this day; this is something all too easy to identify but nevertheless near impossible to eradicate. Attempts at systematic elimination have, in the end, revealed less about the scourge and more about the people: it ain’t a rat problem, it’s a “people problem,” attests Harold Edmund, veteran extermination officer for the Baltimore Rat Rubout program, with whom journalist-cum-director Anthony was fortunate to hitch a ride; the guy’s clearly a character. “The moral test of a government is how that government treats…those in the shadows,” declared Hubert Humphrey, presumably not thinking of rodents. But in what could otherwise have been a Herzog-approved study of marginalia played for eccentricity, Rat Film refuses the lure of a quick fix (peanut butter wrapped in turkey slices, as it were) and digs into the dark recesses of the city’s history of institutionalized urban segregation. Shedding light on a collective rat hunt, the film incidentally illuminates something entirely more pestilent: the abhorrent treatment of unwanted populations.

Contrary to its subject’s own legacy, Douglas Gordon’s portrait of Jonas Mekas, I Had Nowhere to Go, unfolds with scarcely any images at all, the mostly black screen serving as a memory hole from which Mekas’ voice recounts his displacement from Lithuania during WWII and eventual migration to the US. Leaving the viewer with seemingly no place to go (the film demands to be listened to) may seem like a provocation, a form of protest against the 21st century’s proliferation of images and cursed conditions of perpetual migration and exile, but it’s just as well a sensible move for a film about a filmmaker who, camera in hand, shot his way out of oblivion to become the avatar of the American avant-garde. The disembodied, lilting tenor of Mekas’ still-broken English guides the viewer, but Gordon’s strategy of stripping the image still runs the risk of being about his own didactic framing device of Mekas’ otherwise humble, and humbling, account. For all of his harrowing experiences, there is hope in the way Mekas, making his way west, considers the simple act of buying a hat, his plain spoken delivery—“I looked at labels attached to brims of hats”—tapping a particularly incalculable magnitude of freedom by way of the inconsequential. The title, in Mekas’ configuration, refers to the pleasure of no longer needing to be somewhere.

An unfit lion-tamer quits his circus and sets out on the road in rural Italy in search of a lost iron amulet, bent by a notorious strongman years before. So goes the wandering premise of the Competition entry Mister Universo, seemingly descended from the stock mythology of Fellini but quite contrarily possessed of its own bracingly modest realism, by Tizza Covi and Rainer Frimmel, who have crafted a small world from the hard-luck trailer dwellers outside of Rome. A narrative strand that would appear contrived is instead graced with an extemporaneity derived from documentary, as Tairo Caroli reappears from La Pivellina (2009) as a variation of himself, his lions sick and dying, his talisman stolen, and his only ally a superstitious red-headed contortionist with an aching body whom he promises, someday, to marry. A road trip in search of Arthur Robin, the former Mister Universe who might bend him a new good-luck iron, is occasioned by little more drama than the everyday: a bend in the road where the forces of gravity seems to have reversed; stove-top espresso with members of the extended family; an arm-wrestling match; an overheated radiator that gets repaired by an uncle who could’ve been a singer; a brief encounter with a chimpanzee who appeared in Fellini and Argento films; a nap on his grandmother’s sofa; cousins who sew his tattered black leather jacket; and a few leads to the whereabouts of “The Black Hercules,” as Robin was known. Tairo’s eventual meeting with his hero is revelatory for its lack of hyperbole: Arthur Robin lives in a trailer with his wife and works in a roadside safari park near Milan (circus and amusement parks are, in the film’s view, synonymous with melancholy). Implored by Tairo to bend one last iron, the affable octogenarian strongman concedes, “Even time passes for me.” Like the gravitational anomaly in which water appears to flow uphill, Covi and Frimmel’s work acts like a force of nature, showing what remains when the luck and the muscle have run out.

Also a Filmmakers of the Present winner (for Best Director), Mariko Tetsuya’s Destruction Babies, meanwhile, is so pointedly nihilistic that it might very well prophesy the future of youth, which makes it all the more cautionary as a tale of juvenile violence. The film’s slug-fest premise pummels the viewer into a state of submission, which may very well serve as a perverse version of a comfort zone for future generations already weaned on the pain of abandonment, alienation, or bullying. Has there been a more compelling film about violence, Japanese-style, since Kitano showed up on the scene? Having been beaten up by a group of students in his hometown, young Taira (former Cannes Best Actor winner Yagira Yuya) disappears, to the dismay of his younger brother Shouta, only to reappear on the city streets as a film monster like we’ve never seen before: Taira blatantly provokes fights with both weak and tough guys, pummelling them into submission indiscriminately. Even when bloodied, he refuses to bow; he merely gets up and, with a sadistic grin, throws himself at more random foes for another turn at pain. The cycle of violence is ceaseless, rooted as it is in the rationalized “justice” of retribution, to which no one in the film appears immune. Taira’s cruelty assumes a pathetic dimension in his relentless pursuit of contact, albeit of a most punishing kind. It also proves contagious, as a helpless onlooker sees in Taira’s ruthlessness a potential cure for vulnerability, and begins exploiting the bouts for exhibition on social media, and an excuse to tap into his sadistic side. Mariko redefines the notion of “gratuitous violence” in an era when the pursuit of personal pleasure, however painful, has become unalienable, and most likely sponsored. All that remains to be done is cringe, preferably in public, at the horrors.