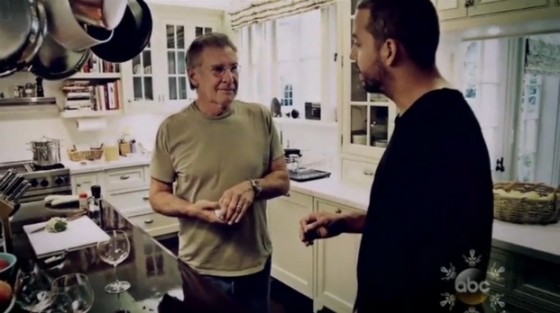 I haven’t had much time or energy to watch many films since late August, having been preoccupied with other fruitless, time-consuming endeavours, fending off vicious personal attacks, and moving around far too much. (Here’s a secret: after more than a decade of gallivanting, film festivals mostly suck.) So a thousand pardons if because of my lapses, dear reader (in the singular), you’re missing out on some solid, primo holiday Oscar bait. About the only thing I’ve seen that I’ve had any strong opinion or desire to write on—next to the high masterpiece that is the Rafi and Dirty Randy episode of The League—is the last David Blaine special. That guy really can do some amazing shit with playing cards. Just ask Harrison Ford.

But in all honesty (and to probably repeat myself), there is an editorial problem that strikes all film-related activities at this time of year, when it starts to get dark earlier, whether it is the aforementioned awards obsession, or its related personal bugaboo, the compiling of year-end top ten lists: both tend to reward mediocrity, suppress original vision, and decimate independent thought. To cite Dave Hickey—guess I’ve had slightly more of a desire recently to read (or to think) than to watch—there are far too many farmers in this industry, and not enough pirates. And it’s pretty damned agonizing to be a pirate in a farmer’s world; every which way I look the poisoned plants are sprouting up all around me, and some, I am quite sure, are festering in my midst. I am not amused.

Words of wisdom: Beware all those critics bearing lists this holiday season, for their tastes need not drive your own. Cover your eyes (or at least wear a black Fordian patch over one) when browsing in charted waters; or shoot metaphorical daggers at the tweets and links guiding your soul to middlebrow purgatory. Fend off the never-ending steamroller of hype, in all its forms (which is even doing its best to ruin the shining, crack-infused prospects of Anchorman 2). Retreat via commandeered fishing ship to that metaphorical desert island, with your Jerry Lewis and Alain Badiou; don’t trust anyone under or over 30, especially if he is your mayor. Look backwards and forwards in anger. Fight the laws of gravity. Regurgitate your cultural vegetables. Download to your heart’s content.

What about cinema? What about life? See the pages that follow, actual paper pages, the product of unalienated labour. Mostly what we present in the pages that follow is the same as we’ve strived to do for the last 50+ issues: an alternative vision of cinema today, one which foregrounds film as art. (There’s a lot in here that you might want to classify as “experimental” or “avant-garde” cinema; we just call it “cinema.”) Take it or leave it—it doesn’t really matter that much to me, even if it’s war out there, with words being weapons, and most of those weapons shooting blanks. Nor should you really care what I think: it’s only one man’s opinion, and this one’s getting older and older by the day. Film criticism is a young man’s game, and I’m reaching for my cane.