Chuck Stephens/Columns, CS49, From The Magazine 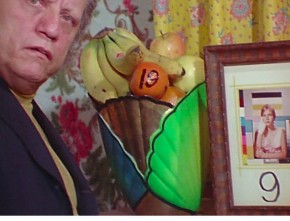 “This is a test. You will probably not be able to answer all of the questions.”—New Improved Institutional Quality: In the Environment of Liquids and Nasals a Parasitic Vowel Sometimes Develops, George Landow, 1976

Owen Land, aka George Landow—one of the founding, and most confounding, members of that moment dubbed by P. Adams Sitney (and quickly mocked by Land) “structural film”—died this past June; he joins Jordan Belson and George Kuchar among the luminaries of the ‘60s and ‘70s heyday of experimental filmmaking we’ve lost of late. A kind of comic genius whose films weren’t necessarily funny (but often are), Land drew upon every modality of the American experimental cinema, from the reconfiguration of material ephemera in Film in Which There Appear Edge Lettering, Sprocket Holes, Dirt Particles, Etc. (1965–66) to the oneiric voyages of psychodramatic late-to-class-ers and half-interested quiz-takers in both versions (1969 and 1976) of his best-known work, the ten-minute-long “test” film, Institutional Quality. In the New Improved edition, a man in a pumpkin-coloured turtleneck and striped socks attempts to negotiate an increasingly impossible sequence of rigidly voiced instructions from an unseen schoolmarm—“It’s getting dark/Turn on the lamp next to the couch/Put a number 6 on what you would touch”—regarding a garishly coloured living room which appears first as a two-dimensional surface, and then as a three-dimensional space into which the test-taker ventures…and becomes lost. What begins as a reference to the ‘50s kids show Winky Dink and You (which had inadvertently encouraged pint-sized viewers to draw directly on their TV screens) soon evolves into a kind of slow-motion Tex Avery cartoon, filled with ludicrous shifts of scale. The sudden appearance of a large woman with an outrageous perm who has “dropped something” is followed by the still stranger appearance of that woman’s suddenly still-more-enormous shoe, through which the test-taker crawls. Finally, as our test-taker floats, arms outstretched and ostensibly asleep, past a living “China Doll” (complete with colour-coded frame) and a jogging green Martian wearing tin foil antennae and a sign reading, “This is a film about you,” we are instructed to sign our names at the bottom of the page and put our pencils down.

“A cherry pie wrapped in barbed wire” is the way David Lynch once described his shriek-of-the-mutilated love song to Laura Palmer and the astonishing Sheryl Lee who incarnates her. Twin Peaks: Fire Walk With Me is a film that—like Bob Rafelson’s Head (1968) and its lysergic detonation of all things Monkee before it—followed an already daft televisionary bottle rocket with a much-dafter feature-length box-office disaster and voluptuously machine-kicking masterpiece. Torn in half by a title card so innocuous it might have punctuated Un Chien Andalou (“One Year Later”), the bifurcated FWWM’s first half remains—for all of the put-on perversities (“Welcome to Canada!”) and non sequitur sub-obscenities of the second (“I’m as blank as a fart!”), and Lee’s mortifying performance, aside—the film’s strongest suit. Gathering evidence for one of the ongoing “Blue Rose cases” overseen by deaf-and-dumber FBI Regional Bureau Chief (and Lynch-alike) Gordon Cole, the film’s opening scenes are haunted by the ludicrously red-tressed and relentlessly squinting Lil, an apparent second cousin to Popeye’s Olive Oyl who is introduced to us by Cole as “my mother’s sister’s girl.” Knock-kneed, air-kneading, and strenuously sour-pussed, Lil wears a conspicuously “tailored dress”—“code,” we’re later told, “for drugs.” (So were all the “smoke” machines on The Monkees.) Lynch, as Gordon Cole, gives us one final instruction for deciphering the vibrant and vexing Lil, the first of this film’s myriad riddles. He fans the four fingers of his right hand down over his eyes as if to clarify: “prison.” Try it yourself. The first step in seeing beyond the immediate is recognizing the bars of your cell.

Posted in Columns, CS49, From The Magazine