Chuck Stephens/Columns, CS56, From The Magazine 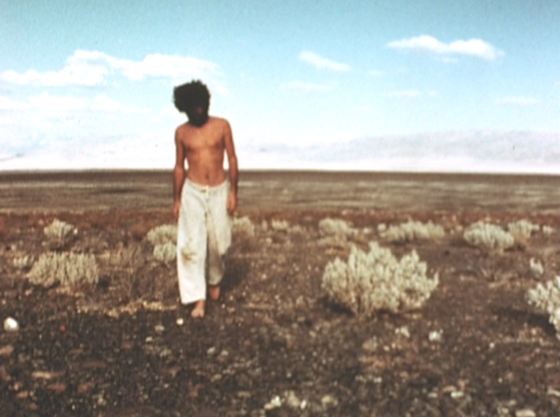 “The most memorable sequence of [Chinese] Firedrill, possibly one of the great scenes in the history of film, involves [Will] Hindle lying in anguish on his floor and slowly reaching out with one hand toward the glimmering void beyond his door.”

The title of celebrated ’70s experimental-filmmaking mainstay and current cine-avant-garde Invisible Man Will Hindle’s Saint Flournoy Lobos-Logos and the Eastern Europe Fetus Taxing Japan Brides in West Coast Places Sucking Alabama Air (1970) is almost impossible to remember. The film itself—a gorgeously photographed, fluidly edited slice of fin de siècle ’60s love and dread, shot largely in Death Valley, and both of the Manson Family moment and altogether adrift in time—is impossible to forget. In it, a shirtless bearded dude in flour-sack yoga pants treks and stumbles barefoot through the white-hot desert, pausing occasionally to assume the lotus position and radiate silent “om”s into the shimmering heat—Gus Van Sant’s Gerry (2002) as one man show. Dude might be “Saint Flournoy Lobos-Logos” (whoever that is), we’re never really sure. The “Eastern Europe Fetus” shows up, “crawling” through a fiery mandala in some indeterminate space and looking like a cross between 2001: A Space Odyssey’s (1968) star child and one of those hideous little edible chocolate babies. There are lens flares and eclipse halos, dude’s supple movements mesmerizingly match cut and complexly lap-dissolved one into the next, and there are more dudes, and nudes, dancing on balconies to bongos and the tinkling of ice cubes in drink glasses echoing down through the canyon…then the orange slash of a shadow-play knife in the night.

Hindle was born in Shreveport, Louisiana in 1929, went to Stanford, joined the Army, worked for Walt Disney (as an animator), CBS/Westinghouse (directing 150 short segments for public broadcast), and filmed the South Sea voyages of Sterling Hayden’s schooner “Wanderer.” He began making personal/experimental films in the late ’50s, stopped for a while, then resumed in the late ’60s. His films began to win numerous small-festival awards and were regularly screened at Bruce Baillie’s Canyon Cinema gatherings. After moving to Alabama (to suck air) in 1970, Hindle finally settled and began teaching filmmaking at the University of South Florida in Tampa in 1973; he stayed there until 1985. He only made two films after 1972. Most of Hindle’s films are still available for rental through Canyon Cinema, even as the Academy Film Archive’s experimental film restoration expert Mark Toscano continues patiently, passionately restoring the filmmaker’s work from color negatives and remnant prints. (Don’t miss Toscano’s fascinating accounts of working with Hindle’s original elements at preservationinsanity.blogspot.ca/2011/11/will-hindles-visual-cue-rolls.html.)

What you’re reading here then are only notes on Hindle: your columnist, eager for more for eons, has only ever seen Flournoy. Once seen, it’s forever stuck, like David Bowie’s human-eye lenses in The Man Who Fell To Earth (1976), which fleetingly resembles Flournoy. Other touchstones include Werner Schroeter’s Willow Springs (1973), Peter Fonda’s Idaho Transfer (1973), and Jim McBride’s Glen and Randa (1971)—visions of flower children and psycho killers at the end of the orgy on various terminal beaches and post-blast bleak-scapes. But that’s just Flournoy; there’s so much more waiting to be rediscovered. We’ll leave you with a wish list, and—as Hindle’s hand forever reaches toward that glimmering void beyond his door—the hope of something more.

Posted in Columns, CS56, From The Magazine