By Chuck Stephens In Columns, CS66, Exploded View, From The Magazine 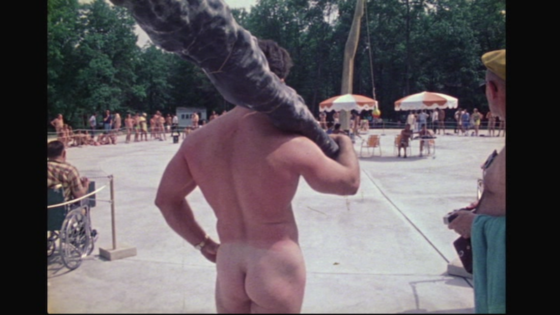 Tom Palazzolo loves a parade. The tramping of feet, a drum’s martial beat, the waving of flags, the decorative floats, the endless processions of just plain folks—the veteran Chicago filmmaker and teacher’s films have been driven by parade and pageantry and the everyday people his camera has seen and loved for most of his career. Some call him Chicago’s best-known filmmaker, but there’s nothing especially high-profile about Palazzolo’s reputation beyond the Windy City, so if you’re new to his filmmaking, you’re forgiven, and you’re in for some very good stuff.

Take Palazzolo’s 1970 Love It / Leave It—one of the high points in Flicker Alley’s Masterworks of American Avant-garde Experimental Film 1920-1970 DVD/Blu-ray combo released last fall—for starters. A 14-minute almanac of Midwestern America and its funky Americana at the end of the Love Generation, Love It / Leave It begins with proudly naked people parading about for all the world to ogle at the annual Naked City beauty pageant in Roselawn, Indiana, before returning to Chicago, where families literally draped in American flags are found wilting under the heat of the sun along a downtown parade route. Palazzolo has a terrifically restless documentary eye and a winning eagerness to make his points sharp and quick; to just keep cutting, and to keep it all relatively light. There are those who have accused Palazzolo’s filmmaking of slackness, amateurishness, a lack of focus or aesthetic finesse—all of which is just so beside the point. Palazzolo is a documentarian first and an “experimental” filmmaker fifteenth; no one would confuse the floppy, funny Love It / Leave It with Bruce Baillie’s infinitely more sublime and complex Quixote (1965), even though they’re really very much on the same wavelength, materially, ideologically, and poetically. If Love It / Leave It’s opening on the crotch of a shapely woman in leopard skin-patterned bikini bottoms suggests David Friedman more than Maya Deren, that’s just Palazzolo’s personal and particular set of democratic vistas. He tends to like what he sees, and he’s disinclined to dick around with the technical fineries of image-making, or to fiddle with any abstractification of the images themselves. What you see is what you get, as heimlich and American as apple pie and neo-Nazis: fragments and fleeting glimpses of neighbourhood gatherings and celebrations, ball games, Civil War re-enactments, wrestling matches, rock concerts, and the 1968 Democratic National Convention all join in Love It / Leave It’s visual churn, while Ray Whilding White’s (sic; remove the h from Wilding and Google for interesting results) musique concrète soundtrack loops and reloops the film’s titular mantra—a dialectical cri de coeur in which the former proposition is clearly the salutary one: to leave America would be to miss the parades, this rich pageant of life, these boobs and their boobs.

Born in St. Louis, Missouri, in 1937, Palazzolo studied painting and photography at the School of the Art Institute of Chicago; his classmates included several Chicago Imagists (and eventual members of the Hairy Who), with whom he has exhibited his work; he began making films in 1965. He’s made shorts and features and animated films and much more than there’s room to elaborate on here. Fortunately for us, lots and lots of Palazzolo’s vibrant and beautiful films are available on Fandor’s streaming site, including Love It / Leave It. You can find the terrific Your Astronauts (1970) on YouTube, another of Palazzolo’s parade films, this one centring on and expanding out like an exploding universe from the celebration of the returning Apollo 11 space crew that would make a great double bill with Interkosmos (2006) by Jim Finn, another longtime Palazzolo fan. The fantastic archive and resource available at mediaburn.org is also worth searching for select Palazzoloiana, including footage the filmmaker shot in 1978 of a shirtless Rahm Emanuel, the currently embattled and much detested Mayor of Chicago, as a counter-protestor at a neo-Nazi rally, among much, much else.