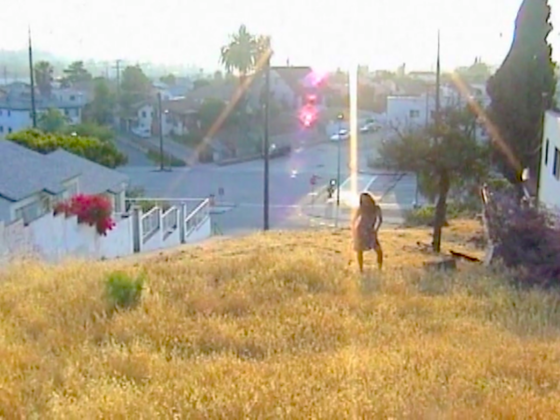 In what follows, I have perhaps too wantonly isolated Whacker (2005) from the rest of the work of California video artists Stanya Kahn and Harry Dodge, former collaborators each with substantial solo careers. Indeed, I’ve left bushels of context aside. Why? Because this column is brief and the sun is going down and there’s yet quite a thicket of weeds upon the hill and still plenty left to say.

In short, Whacker is the one of a series of Dodge/Kahn collaborations made during the first decade of this century; psychologically chaotic and altogether compelling performance-based works like Can’t Swallow It, Can’t Spit It Out (2006) and I See You Man (2008), which showcase Dodge and Kahn’s skills at incarnating various modes of American mind-fray. Some of Kahn’s solo work sustains this inquiry into only-partially-bandaged-mortality in It’s Cool, I’m Good(2010); the more recent Stand in the Stream (2017) fuses personal-as-political reportage with rapidfire montage. (There’s much more at stanyakahn.com.) Dodge – “an American sculptor, performer, video artist, and writer, whose interdisciplinary practice is characterized by its explorations of relation, materiality, and the unnamable with a special focus on ecstatic contamination” (per harrydodge.com) – continues charting, in recent shorts like The Time Eaters (2014) and Big Bang (Song of the Cosmic Hobo) (2016), the world alive and squirming in the arroyos and furrows that shadow and shape Los Angeles’ roadways. The videos are filled with zone-stalkers and riveting stumblers, all foraging for ways to navigate and maintain the uneasy intersectionality of soul and surface streets undergirding the ongoing dispossession that haunts each angle of this city, where everything and everyone seems to be something someone found left on a curbside and turned into something else.

Back to Whacker, made by Dodge and Kahn a little over a decade ago, in which little is said and everything resides. In it, Kahn—looking fabulous in a halter-top sundress and highway patrolman shades, shapely calves atop high-heeled Candies wooden sandals—saucily snaps her gum in the Golden Hour glow as she whacks the weeds in an empty hillside lot somewhere in Glassell Park. Weed-whackers and their more voluble cousins, leaf-blowers, are ubiquitous here, though the mental image their piercing whir and moan produces is invariably male, sweat-stained T-shirt, immigration status unknown. Improbable yet wholly affirmative, Kahn’s glamorous white-girl presence and somewhat hard-edged demeanour skirts comedy without being slightly laughable. Traffic and passersby don’t bother to glance in her direction, and she gazes out across the landscape (cluttered with rocks, old tires, half-buried bricks, and cardboard flotsam) as if it were her demesne, and hers alone. A lioness in rubble, the hills of Griffith Park in the far distance, the Pacific further still, wavelength, sunset. Nothing happens except the whacking, the gazing, the traffic, the glint of the slowly sinking sun in her shades. Wuhhhhhhh, wuh-whuhhhhhhh, chunkty-wuhhhhwuhhhhh. Kahn’s hair is fabulous. She cocks her hip, takes a short breather, then resumes whacking. Elvis Presley singing “In the Ghetto” seeps loudly in from somewhere, along with a couple of discreetly layered, screechy-tire, car-cataclysm sound effects, momentous and over in a flash. Whacker closes on a glorious long shot, facing west, staring down the sun: Kahn is eternally whacking away, halfway up the rise, a world of weeds left to fell, Sisyphus with a Home Depot scythe.

Obviously, nothing happens in Whacker, and it all takes place in a nowhere space: an empty plot, undeveloped and abandoned, on the edge of an otherwise lively if largely residential thoroughfare, itself on the edge of the perpetually seething city. And yet a very specific sort of Los Angeles seems to emerge, collectively and separately, from Dodge and Kahn’s work; as specific as the city that lurks in the canyons of Nathanael West’s The Day of the Locust, where one sometimes glimpses “gaudy birds [that] burst the colored air into a thousand glittering particles like metal confetti.” The golden glow in Kahn’s aviators is blinding. Dodge once described the ever-evolving, always-refracting characterizations created in collaboration with Kahn as “concretizations of exuberance on the margin.” Another glittering particle, born in the ghetto. Will she grow to be an angry young man some day?

Note: the version of this column now appearing in the print edition of the magazine was compromised by some inadvertent omissions and authorial mistakes, for which I alone take full responsibility. Amendments will appear in the next print issue. My sincere apologies to Harry Dodge and Stanya Kahn for these missteps.Whacker rocks.