Chuck Stephens/Columns, CS58, From The Magazine 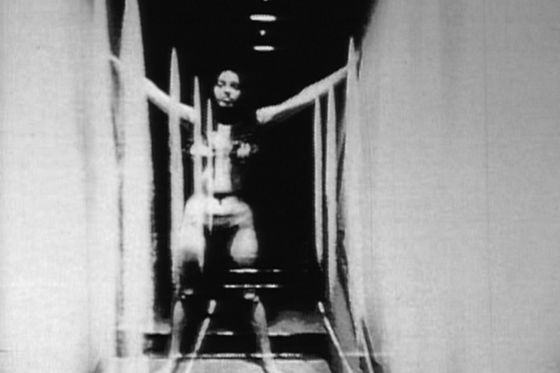 “An unknown observer is seen travelling through a bleak corridor. At the end of the corridor they see a naked woman, whom they are unable to reach as their trip seems to become increasingly twisted and looped.”—IMDb “storyline” description

“An extraordinary exercise in visual polyphony…the pyrotechnic surface is exfoliated with Hegelian relentlessness from an elemental formal core…the many are no less the many for being inescapably the One.”—art historian Sheldon Nodelman

Standish Lawder (1936-2014) ascended this May, leaving us to picture him at last among the levitating, heaven-bound denizens of Necrology (1970), one of his best-known and funniest works—a mordant short movie about the afterlife once described by Hollis Frampton as “without doubt, the sickest joke I’ve ever seen on film.” (YouTube it for yourself: laughing gas is often the rarest air.) An educator, image technology innovator, author, historian, and “structuralist” filmmaker extraordinaire, Lawder participated in early studies of psychedelics and phosphene phenomena, married Dadaist pioneer Hans Richter’s daughter Ursula, and wrote The Cubist Cinema, a groundbreaking study of early avant-garde cinema published by Anthology Film Archives in 1975. He taught at Harvard and Yale and retired as head of the film department at UC San Diego in 1996 to found Denver Darkroom, a teaching centre for fine-art photography in Colorado. Between 1968 and 1970, he made Corridor, a mesmerizing and ultimately mind-melting 20-minute film about a hallway and a naked lady that—for all its exfoliating “Hegelian relentlessness”—turns out to be some of the trippiest shit you will ever see.

A few more nuts and bolts: “Shot in grainy black and white,” wrote critic/curator Ed Halter, interviewing Lawder for the Village Voice in 2007, “the film comprises a series of shaky tracks and zooms down a narrow hallway (inhabited intermittently by the apparition of a nude hippie-chick) that builds into a dizzying array of superimpositions and reprinting, which in turn builds into flickering monochrome fields, all the while interacting with composer Terry Riley’s synthesized warblings. Lawder has called Corridor “an occasion for meditative speculation” that invokes “a change in brain-wave activity…through the interface stimulation of alpha-wave frequencies.” Lawder also told Halter that he finds the gloriously glacial space-invading of Michael Snow’s Wavelength (1967) “incredibly sensual.”

A masterpiece of sensualized space quite unlike either Wavelength or its still closer kissing cousin, Ernie Gehr’s Serene Velocity (1970), Corridor continually (if ultimately rather chastely) evokes a passage palpably maternal and erotic. Lawder’s camera rhythmically penetrates and re-penetrates the length of a carpeted hallway, plunging always toward the apparition of that “naked hippie chick,” who often appears spread-eagle at the corridor’s far end, part Venus of Willendorf, part Vitruvian woman. The walls of the hallway seem to throb and surge as the film builds momentum, finally climaxing in a spasm of pure light. An errant but perfectly centred pubic hair caught at one point in the camera or printer’s gate lends itself as an amusing accident to the overall effect. Like the best sex, Corridor leaves you limp, flush with pleasure, and the fading murmurations of half-glimpsed delights. (There are actually two different naked chicks, and two different extremes of the corridor, approached in the course of the film.)

Corridor’s extraordinary catalogue of superimpositions, quadruple exposures, stroboscopic scintillations, and overall orgasmic blur were accomplished largely with a contact printer made out of a coffee can. Film preservationist Mark Toscano, currently at work restoring Corridor and other Lawder films, explains how this visionary piece of homemade hardware works on his blog (preservationinsanity.blogspot.com/2007/11/contact-printer.html): “[Lawder] would bi- or tri-pack raw stock (b/w reversal usually) with existing footage…then contact print the footage in various ways using different brightness settings on the light bulb in the coffee can, which would shine its beam through the old flashlight tube into the gate of the camera. In the case of Corridor, the resulting footage was sometimes further processed, or printed to negative, or hi-con, or whatever.”

The results are fucking out of sight.

Posted in Columns, CS58, From The Magazine