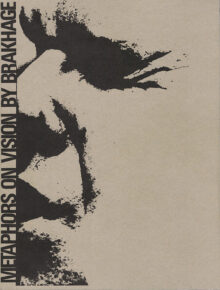 “Oh, slow-eyed spectator, this machine is grinding you out of existence.”—Stan Brakhage

Stan Brakhage’s Metaphors on Vision—first published in 1963 by Jonas Mekas as a fabulously special issue of Film Culture, designed by Fluxus forefather George Maciunas, bound in beautifully corrugated cardboard pierced with an eyehole, beyond whose vellum retina lurked Brakhage’s own eye (in negative) returning your gaze—is back. Back the way vinyl records are back, bright and beautiful: classic old sights and sounds of the ’60s reified and refreshed with a sturdy new binding and state-of-the-art typesetting. The new edition—essentially an expansion of Metaphors on Vision’s second edition, where the corrugations were replaced by what felt like heavy-duty, brown-to-grayish construction paper and Brakhage’s famously smush-faced visage wedged up against the book’s title—includes a faithfully reproduced facsimile of the entire typewritten-on-acid-blotter-stock original volume (interviews, photographs, and all), followed by a cleanly set and painstakingly corrected and annotated version of same by editor P. Adams Sitney, all from the venerable Anthology Film Archive and Brooklyn’s thriving film collective Light Industry. Do you need to own it? Undeniably, especially if your back-in-the-day copy is as spine-damaged as mine is. Do you need to read it? Well, naturally, even if its opening strains are already ingrained in our film-cultural memories: “Imagine an eye unruled by man-made laws…”, etc., etc. Need I continue? In these confines, those words ought to complete themselves. It’s the very Pledge of Allegiance of the experimental film world, that edifying, cinema-defying opening Stan-za—our emulsion-hugging Leaves of Grass.

Metaphors on Vision is one of Film Theory’s Great Books, as central to a rounded understanding of 20th-century thought on the medium and its horizons as Sergei Eisenstein’s Film Form, André Bazin’s What Is Cinema?, and Hollis Frampton’s Circles of Confusion. Like many important tomes, it’s intermittently intimidating and occasionally unreadable, but Brakhage’s writing is also extremely variable, sometimes direct and diaristic, and often playful and elusive, woven with wordfoolery and whimsy, its serious-mindedness apt to go skittering away on a sudden inspiration. It’s a manifesto filled with screeds, proclamations, flights of speculation, digressive explications, letters to friends and critics and the Fulbright scholarship committee; poems, polemics, kitchen-sink soul-searching, shards of memories, doodles, brilliance. The presiding linguistic spirit is Gertrude Stein, though the ghosts of a hundred others are present too, as when Robert Creeley suddenly wafts through Brakhage’s recollection of a trip to the graveyard of Père Lachaise (where he shot The Dead in 1960) with Marie Mencken and Kenneth Anger: “And we saw the City of the Dead as ave-newed, more alive than the spooking words ‘Rue de la Reste,’ et set, or as if ‘Here lies’ were to be taken literally as comment on all tombstone writing.”

Tombstone writing: here, lies. For how can Brakhage have been gone so long already, dead since 2003, while his filmmaking seems more alive today than ever before? Surely there are currently more people who are seeing and appreciating Brakhage’s films—given the ever-burgeoning state of post-internet cinephilia in general and the Criterion treatment that many of his key texts have received in particular—than there ever were when he was alive. There are also more Brakhage films available and in circulation today, and in better quality prints, than ever before. Much of this is due to the work of the Academy Film Archive’s preservationist Mark Toscano, who recently screened for me what he calls “the final word” in Brakhage’s hand-painted films: the 32-minute Panels for the Walls of Heaven (2002), one of the last works the filmmaker completed. It’s staggering, filled with lava flows of irradiated rust-reds and sludge-mercury blues so dense they seem to bulge from the frame. Indeed, in pictures of the original elements in their can, the reel contains passages of thick, long-dried paint that seem to glow at irregular intervals along the otherwise black edges of the wound film, like the crazy-coloured sugar-swirls of some fantastic eye-confection. Alas, further discussion of that masterpiece will have to wait for another column. In the meantime, delight! The films—and associated texts—of Stan Brakhage live on!

Posted in Columns, CS73, Exploded View, From The Magazine