Chuck Stephens/Columns, CS54, From The Magazine 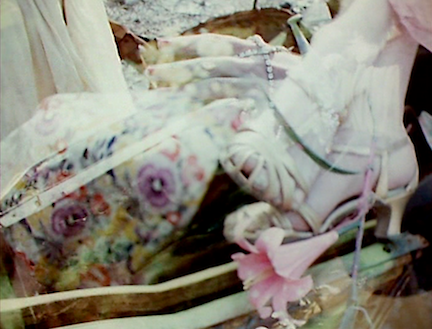 Jack Smith—creature on fire, ruler of lost Atlantis, and author of the bite-sized encomium to the “perfect filmic appositeness” of Maria Montez quoted above—looms before us in a column of late afternoon loft-light, head swaddled in toilet paper, face swallowed by fur. All of yesterday’s parties seem to have exploded in the air around him. Walls waft away into scarves, ceilings fester and drip with balloons, somnolent freaks fill a hammock, then two hammocks, then the frame itself, superimposed upon one another like gaily-painted ghouls rummaging through piles of von Sternberg’s old fishnets. We are watching Ron Rice’s breathtaking 1964 palimpsest of satin, greasepaint, and beads, Chumlum—a hallucinatory micro-epic filmed during lulls in the production of Smith’s Normal Love and one of the great “heroic doses” of ’60s underground cinema, a movie so sumptuously and serenely psychedelic it appears to have been printed entirely on gauze.

Chumlum is as close to cinematic mercury as aural-optical alchemy will allow: though hardly a “difficult” film, it’s extraordinarily elusive, almost impossible to keep in your cognitive or visual grasp. As it opens, someone seems to be frying ball-bearings in a velvet pan on the soundtrack: it’s future (and fleeting) Velvet Underground drummer Angus MacLise, assisted by recording engineer/minimalist-instrumentalist Tony Conrad, coaxing hypnotic shimmers from a hammered cimbalom. This roiling, panging sound seems immediately to trick time into vanishing: moments into the movie, we surrender to its synesthetic translucences, sounds within sounds, sight upon sights, no longer remembering when any of this began. The creator and “stars” of Normal Love (Smith, Mario Montez, Beverly Grant) laze around Rice’s loft, swaying, sashaying, but the more we attempt to distinguish what from who in each successive overlay of images interrupted by scrims and veils, the less distinguishable anything becomes. We might as well be thumbing through an oil-soaked stack of some hippie Scheherazade’s etchings: a thousand and one Lower East Side nights melting together in a cosmic slop of languid poses and limp half-dances, a smoke-fragile erotica that climaxes and dissolves the moment it hits your eye. “Toward the middle,” wrote P. Adams Sitney of Chumlum in his epochal Visionary Film, “[Rice] shows Jack Smith in an Arabian costume with a fake mustache, smoking hashish. The film becomes [Smith’s] reverie in which time is stretched or folded over itself.” Good shit, Sit, for indeed Chumlum does manage to capture with unnerving fidelity the murky glories, the sudden temps morts and temps mutant, not to mention the inevitable malaise of a rich but fading high.

Ron Rice was the great tragic figure of the ’60s underground film scene. Creator of the late-Beat, proto-slack, ultra-indie 1960 feature The Flower Thief—an improvised Taylor Mead romp across old San Francisco which inspired Smith to begin work on Flaming Creatures (1963)—and subsequent Smith-collaborator on the unfinished The Queen of Sheba Meets the Atom Man (1963), Rice died of pneumonia in Mexico in late 1964, at the age of 29. As J. Hoberman points out in his essential On Jack Smith’s Flaming Creatures and Other Secret-Flix of Cinemaroc, 1964 was also an unusually fertile and collaborative time for Smith, who after completing Flaming Creatures appeared as one of Warhol’s 50 Fantastics and 50 Personalities (1963-64) and in Warhol’s unfinished Batman/Dracula (1964), Gregory Markopolous’ Illiac Passion (1964-66), George Kuchar’s Lovers of Eternity (1964), and numerous other underground spectacles. But it was only in the crazy crucible of Chumlum that Smith’s frittering, flailing “play” out in front of the camera seemed to find a mostly-in-focus chemical twin behind the lens. And by pitting lushly overlaid and garishly “pasty” (as Smith preferred to describe Normal Love’s pale pink and green mise en scène) static tableaux against churning, heaving, altogether lysergic camera spin, Rice and Smith managed to fix the madness in its moment, but only for a moment, and then let it get away.

Posted in Columns, CS54, From The Magazine