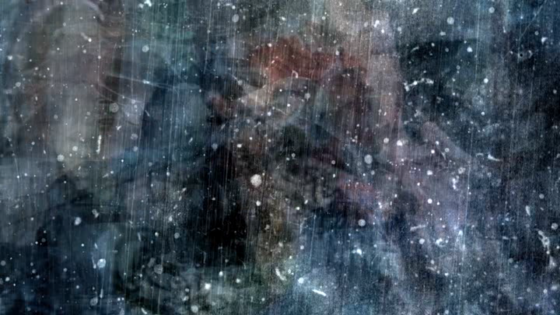 “Like news reports of wartime Japan, films with stories or a precise structure throw images at an audience with their meanings already intact. Rather than making films with my own imposed structure, my method is to abandon structure altogether or, in other words, layer images that once embodied meaning on top of one another until they become unintelligible.”—Makino Takashi

Grain or rain? A grey, acid shower is pelting down onscreen; perhaps several layers or overlain lattices of pelt. It looks a bit like the rain in Kinugasa’s A Page of Madness (1926), bright and brittle against black night, but what exactly it is that’s pelting is unclear. Scratches on emulsion? Runnels of gouges on clear leader? Perhaps multiples of each, along with action-painting splotches. Within or perhaps behind the rain, a great pulverization begins; Jack Kirby collages come to mind. The film is Ghost of OT301 by Tokyo-based experimentalist Makino Takashi, made in 2014. Soon, muted colours seep in, lush stains, along with vestiges of architectural forms and the outlines of men’s hats, all in steady tumult. This is a cinema of depths, less a double- or triple-superimposition than a pile of semi-permeable blankets; a veritable fog of filmstuffs where at last, as one be-leathered crooner of the ’60s used to observe, faces come out of the rain. Ghost of OT301 was the first of Makino’s films to utilize found footage, though the findings in this footage seem akin to Ezra Pound finding the faces of a crowd in the petals on a wet, black bough. Both dense and discorporate, Ghost of OT301 is a ghost story on a variety of levels: the film’s title alludes to the former address of the Amsterdam Film Academy, subsequently an arts-space squat now legal and licensed where Makino first performed a live version of the film, which features a score by the improvising ensemble Inconsolable Ghost (of which the filmmaker is also a member). If watching Makino’s work begins to put you in mind of the contemporary musical micro-genre known as hauntology, and in particular the work of James Leyland Kirby, a.k.a. The Caretaker, you’ve been frequenting the right crypts. Makino’s work is lush with hauntological shadings: slow drift preferred over propulsion or resolution, a captivation with the beauty of wreckage and ruins, ultramodern yet clinging to the past.

The metaphysics and materialities of Makino’s patented pelt are at this point familiar to many along the international film-festival circuit, where the Tokyo-based multidisciplinary image manipulator has been premiering work and winning awards since his No is E, a collaboration with musician Jim O’Rourke, took the Terayama Shuji Prize at the Image Forum Festival in 2007. Perhaps one of the most fascinating qualities of Makino’s work is its professedly liminal nature: the filmmaker, an experimentalist who studied at the Quay Brothers atelier and who works professionally as a Telecine colourist, is constantly aware of the interface of old-school photochemical filmmaking technologies and state-of-the-art digital possibilities at play in his image-making. Moreover, as much as Makino’s work seems fresh and of the moment, it’s clear that many of the tropological pillars of classical abstract cinema are still very much in play: flickers and stroboscopic pulses; nature photography willfully obscured; frantic caméra-stylo gestures and dizzying flurry; light dancing on water; dazzled dendrites on eyelid interiors; and a multivalent inscrutability over all. There are lots of hints of the beauty of Makino’s work available online, and bootlegs of two DVD compilations if you dig a little deeper, which I recommend. The first logical starting points are the filmmaker’s own website at makinotakashi.net and his Vimeo page (vimeo.com/makinotakashi), where you can find great-looking trailers for Makino’s recent work, and a not-so-great-looking copy of Ghost of OT301, which is chunky with digital artifacts that muddle the work’s sensuous mysteries. (Get thee to a private tracker.) Fans of shoegazmic excess and old-fashioned “Wow!” to the head of the line.

Posted in Columns, CS78, Exploded View, From The Magazine