Chuck Stephens/Columns, CS62, From The Magazine 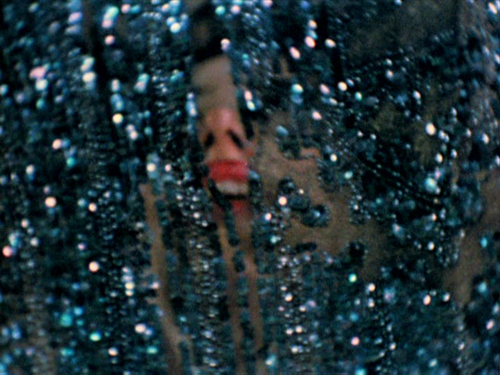 Puce is the color of a flea, literally.

“Pooce” is how Kenneth Anger sometimes pronounces the word puce, a franconym denoting the grayish-purple color that is said to have been Marie Antoinette’s favourite shade. Puce, moreover—et merci Wikipedia—“is said to be the color of the bloodstains remaining on linen or bed sheets, even after being laundered, from a flea’s droppings or after a flea has been crushed.” Yum. We all have our pooce moments. Your columnist once spent an hour or so in Curtis Harrington’s bedroom that was pooce through and through…but that’s a story for another day.

A “fragment” of an uncompleted larger project to have been called Puce Women, Anger’s Puce Moment was made in 1949, two years after he’d finished Fireworks and a year or so after he’d met Dr. Alfred Kinsey. Its subject, per the director, “was my love affair with Hollywood…with all the great goddesses of the silent screen.” Its objects—maximally fetishized, thank Lucifer—are twofold. First, there is a collection of fabulous dresses, costumes of Gilded Age divas which Anger’s grandmother had collected and handed down, and which we see as they are selected and displayed, one after another, from an unseen dress rack. And second, there is the flaming creature Yvonne Marquis, future consort to the President of Mexico, rich little poor girl, a living Betty Boop lounging about her Chumlum-lush boudoir before drifting dreamily (if somewhat desultorily) into the Southern California sun…in the company of a quartet of Borzois. Faced, as always, with limited resources, Anger decided to shoot much of the film (with Curtis Harrington occasionally depressing the shutter release, nothing more) at eight frames a second, hoping to ape the “animated” qualities of silent cinema; it’s what lends Marquis her amphetamine-eyelash zest. Puce Women was to have been “a symphony,” Anger has explained, “with each woman representing a time of day.” In Puce Moment, Marquis embodies both a gorgeous puce-sequined gown and that always-elusive pooce moment of the day, a time forever indeterminate, an interface of exhaustion and excitation, an empurpled Golden Hour of the mind.

Lasting just over six minutes and originally accompanied by Verdi, Puce Moment is, among many other things, a study in generational discordances: as distant from the silent era as Anger was in 1949, so too are the film’s images a generation apart from the folk-psych ditty by Jonathan Halper that the filmmaker selected at the end of the ’60s to, ostensibly, update the original operatic fustiness he’d chosen. The effect is one that Anger has owned since he perfected it in Scorpio Rising (1964): staggeringly effective pop-culture counterpoint. “Yes, I am a hermit,” Halper warbles sex-magickly as Marquis flutters about, her eyelids as restless as hungry fleas on a cat. “Ecstasy’s my game.”

“I consider myself a magician,” Anger has told his interviewers, “but it’s something I do in private. It’s not something I have to prove to anyone.” Puce Moment’s interiors were reportedly shot at legendary Hollywood salon host Samson de Brier’s bungalow, where Anger’s later Inauguration of the Pleasure Dome (1954) would be photographed. Where Puce Moment’s exteriors were photographed remains uncertain: de Brier lived in the flatland near the Hollywood Forever Cemetery, but the realm into which Marquis drifts and from which she finally descends in the film is clearly somewhere in the hills. And who is the figure peering down on Marquis from an upper terrace in the film’s final shot? Interior magic, exterior mystery. According to Anger “biographer” (and Sleazoid Express editor) Bill Landis, Anger made another film in 1949, The Love That Whirls, based upon an Aztec ritual involving human sacrifice that, because the footage contained nudity, was destroyed at the lab by technicians who deemed it obscene. Puce Women will never exist; Puce Moment is indelible. Magic made but never seen. That’s witchcraft!

The author wishes to thank Edward Crouse for his pooce insights into these and other matters.