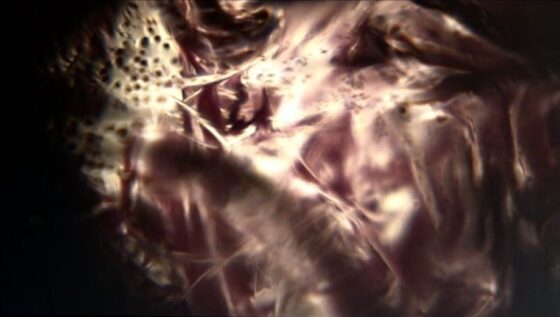 Ken Jacobs moves secretively in the half-dark that surrounds his apparatus. (“I’m terrible at keeping secrets,” he later admits to the assembled crowd.) Every ten minutes or so, Flo Jacobs exchanges one of what might be a dozen or so miniature flying saucers with her husband, who feeds the elaborately adorned platters into a large, mysterious box. As overflowing with uncontainable luminosity as Kiss Me Deadly’s whatsit, this contraption is Jacobs’ Nervous Magic Lantern, a legendary device known to sculpt painted light into tangible space.

The place was the REDCAT theatre in Los Angeles this past October, the performance entitled Metropolis Looms And The Bad Maria Is Tuned Up, but it could have been one of the many darkened rooms in which the Jacobs and their Lantern have endeavoured to reinvent cinema, with no filmstrip involved. (The evolution of the NML is, like Jacobs’ own evolution as an artist and filmmaker, complex; the enticed reader is immediately directed to the myriad perspectives of Optic Antics: The Cinema of Ken Jacobs, edited by Michele Pierson, David E. James, and Paul Arthur, Oxford, 2011.) Reframing and irrationally expanding elements of ancient cinema was once the focus of Jacobs’ magic-lantern shows, but in recent times those painted- and otherwise-mysteriously-adorned platters have become the maker’s main presentational medium. Jacobs “performs” each projection, somehow adjusting and rotating the plates before a lens or lenses inside the box, his sleights-of-hand hidden within the Lantern’s confines: Oz behind a cardboard flap. A black shutter-blade affixed to the exterior of the apparatus lazily chops the lantern’s beam into a slowly pulsing string of stroboscopic image-impulses—a para-cinematic flickering that doesn’t flatten images against a screen so much as allow volumetric globs and smears to hover on and in front of its silver surface. The effect occurs in 3D—before, upon, and around your naked eye. No glasses are required.

What exactly it is that’s being projected is…difficult to say. An action painting exploding in exquisite slow motion? The innards of a diorama built from bits of alien anatomy and cosmic gauze? A psychedelic macro-bramble of micro-berries? Everything floating there in the beam seems forever on the verge of resolving into focus, into something, even if it all stays as pulped and indefinite as an insect’s mastication. The eye gets lost in never-quite-solid tendrils and glacially flowing fronds of light. At REDCAT, Jacobs performed with noise-sampler Aki Onda, undergirding the visuals with a similarly shifting mosaic of rattles, drones, whistles, faraway boat horns, beans in a hubcap. Onda, who has performed with Jacobs several times, said the filmmaker’s only instruction was that he wanted “sounds from life.” It’s all about ontology: “Stories, I’ve told a few,” Jacobs, grinning, had said during a talk at LACMA the day before, “but contemplation of being is really my thing.” And while an NML show is certainly a “you had to have been there” sort of experience, Jacobs is content to let the internet share all the magic it can allow: there are excerpts from many Nervous Magic Lantern performances, and a thousand other delights, on Jacobs’ Vimeo channel (vimeo.com/kenjacobs). Turn off all external lights, turn the sound up, go fullscreen. If your monitor is large enough, a bit of the 3D effect will come through. Now imagine all that stuff spilling directly into your (optical) lap.

The ever-generous Jacobs’ simultaneously mirthful and pointedly political words at LACMA (where he was speaking in tandem with the museum’s wide-ranging survey 3D: Double Vision) had interwoven the history of depth-cinema proponents and pioneers (Lenny Lipton, Ray Zone), volumetric analyses of the brushstrokes of Cézanne and the Action Painters, the relationship of the Stereopticon to Cubism, the atom bomb and our current political despair, Jack Smith, sperm, Popeye, God. It all spilled over into the show of light the following night. Unkeepable secrets. Sounds from life. Frozen motion and reanimated ontologies. No wonder the magic lantern is nervous: it can barely contain the multitudes it projects.

Posted in Columns, CS77, Exploded View, From The Magazine