Chuck Stephens/Columns, CS55, From The Magazine 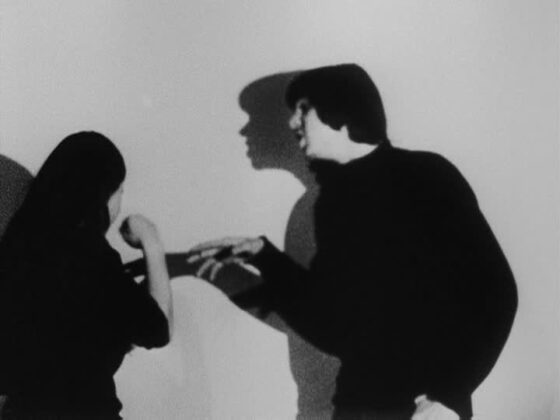 Hollis Frampton is speaking: “Whatever is inevitable, however arbitrary its origins, acquires through custom something like gravitational mass, and gathers about itself a resonant nimbus of metaphoric energy.”

Experimental filmmaking titan Hollis Frampton’s Critical Mass—a lock-groove valentine from a young lovers’ meltdown-already-in-progress—was filmed on two one-hundred-foot rolls of black-and-white 16mm stock during February of 1971, on the same SUNY Binghamton campus where Ernie Gehr had photographed his stroboscopic still life Serene Velocity the year before. One of the group of Frampton’s films known collectively as Hapax Legomena—a Greek phrase which the filmmaker parsed alternately as “unique words” (i.e., words unique in an author’s corpus), and as “things said once”—Critical Mass is either a boho melodrama or a structuralist jape (and, depending on your temperament, probably a good deal more). One thing is certain: very little in this angry, funny film occurs only once.

The set-up is simple: “He” (sullen film student Frank Albetta) has just returned, unrepentant, to the apartment he shares with his girlfriend after an unexplained absence of two days. “She” (volatile, voluble classmate Barbara DeBenedetto) has been waiting for him all that time and is now, to put it mildly, extremely fucking pissed. The film’s melodrama—an emotion-choked, method-actor-y gander at a few highly charged moments of a couple’s ongoing relationship crisis—is also its sitcom: a kind of polyglot culture comedy about today’s crazy kids, too young to have been at the Exploding Plastic Inevitable, too skuzzy for an episode of All in the Family, but absolutely ready for rock-and-roll grad school and anything else that leads to the Ramones. But it’s not so much what Critical Mass is about as how it’s about. With Steve Reich’s 1966 tape-loop rondo “Come Out” as a structural touchstone, the movie’s a diachronic, minimalist remix in which every cadence of hot-headed accusation, every callow swerve into misdirection seems iterated only to be reiterated—an eternally unfolding and infernally unending falling-out, in which every fragment of dialogue is spluttered once, shouted twice, then stuttered into thrice by Frampton’s three-steps-forward-one-step-back, elusively algorithmic dice-and-splice.

“Frampton eventually made three copies of both the sound and picture he had recorded,” explains film and media scholar Ken Eisenstein, “and by cutting them repetitively, he pulsed the material, expanding, ‘in the sense of Styrofoam, the bubbled-up time in the thing.’” And when Frampton later described Critical Mass as “a film about accounting for your time,” he was being typically wry, and typically multiple: there are all kinds of time bubbled-up in the thing. The argument itself lasts (let’s say) ten minutes, the entirety of which was tape-recorded, but because only six minutes of film footage of the argument was exposed, the film begins, ends, and alternately eclipses into flat black or bleaches into white for lengthy sections of its just over 25 minutes, even as the argument on the soundtrack rages and re-rages on. Swallows and sighs and howling silences loop and skip; when the images finally return, time’s begun to slide and the sync has slipped. Flustered hands, sullen wall, darkness is coming. Bubbled-up time, and time again.

Then there are bubbles that burst. While photographing Critical Mass (“noun, Physics: the minimum amount of fissile material needed to maintain a nuclear chain reaction”) in February, Frampton was unaware of the extent to which his own marriage was in the late stages of atomization. His wife finally left him in June; the filmmaker finally began editing his footage in October: “As I began to cut the footage, I began to understand why I had made it in the first place.” Here comes the sitcom again. “It wasn’t comic, particularly, in the making,” Frampton recalled of the circumstances and structural advances of the film, “[but] I extrapolate from that a general law of comedy that wasn’t a bit funny at the time.”

Posted in Columns, CS55, From The Magazine