Chuck Stephens/Columns, CS63, From The Magazine 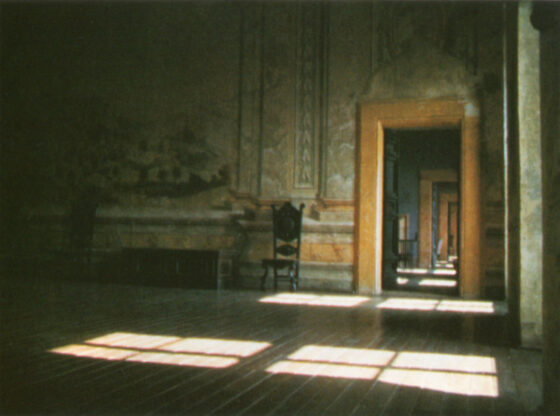 One of the most extraordinary American experimental filmmakers of the 20th century, Gregory Markopoulos (1928-1992) also remains one of its most elusive. For more than a decade before his death, Markopoulos—who had emigrated to Europe in 1967, withdrawn his films from circulation, and asked that a chapter on his work be removed from P. Adams Sitney’s Visionary Film—had been disassembling many of his most celebrated films and reworking them, along with some 55 previously unscreened new films, into a final magnum opus, Eniaios, a silent, 80-hour-long epic arranged in 22 cycles. Left unprinted when Markopoulos died, Eniaios (a term evoking unity and oneness, yet a film in which, separated always by lengths of leader, no two images “touch”) is still today being slowly processed and projected for the faithful once every four years at the outdoor theater known as the Temenos—a place “cut off” from the everyday and reserved for contemplations of divinity—established by Markopoulos and his partner, the filmmaker Robert Beavers, in the mountain village of Lyssaraia in Greece. Only eight of the 22 cycles, each running between three and five hours, have been screened thus far.

“I propose a new narrative form through the fusion of the classic montage technique with a more abstract system,” wrote the filmmaker in 1963, in one of the essays collected in Mark Webber’s invaluable Film as Film: The Collected Writings of Gregory J. Markopoulos (The Visible Press, 2014). “This system involves the use of short film phrases which evoke thought-images. Each film phrase is composed of certain select frames that are similar to the harmonic units found in musical composition.” Markopoulos spent much of his career focused on various methods for editing and interrelating “short film phrases” and individual compositions (of often inanimate objects, emptied rooms, and unpopulated landscapes) in elaborate patterns, and finally on the effects of individual frames as they puncture and punctuate passages of darkness—like flashes in a night sky, or musical notes suddenly piercing silence. Eniaios is the complex culmination of this life’s work, but aspects of its nascent form can be glimpsed in 1968’s Gammelion, a 54-minute portrait of the much-storied castle of Roccasinibalda in Rieti, Italy, made from only six minutes of photographed footage: each image fleetingly appears and reappears, interwoven in a thousand slow fades and myriad combinations with lengthy passages of black and clear leader.

Shortly before relocating to Europe, Markopoulos had also developed a personalized method for composing and editing certain films entirely in-camera. In the eventually restored Markopoulos chapter of Visionary Film, Sitney (still the filmmaker’s greatest admirer and exegete, and Artforum’s Temenos correspondent) explains: “Carefully watching the frame-counter on his camera, [Markopoulos] would expose a number of takes of one image interspersed with blackness, achieved by covering the lens with his hands or the lens cap for as long as he wanted, or by using the automatic fading mechanism of his Bolex camera, all with different nuances. He would then rewind the film and expose the units of the next view, detail, or object.” Both the lush 1966 apartment portrait Ming Green and 1967’s Bliss, a study of a Byzantine church on the Greek island of Hydra, utilized this technique, the cumulative effect of which finds beautifully composed, naturally lit images appearing from and disappearing into darkness, often superimposed upon one another in extremely specific ways—like panes of illuminated vapour in a chimerical piece of leaded glass.

Markopoulos’ brilliance as a composer with light may owe a debt to his studies with Josef von Sternberg while a student at USC, but like so much related to the filmmaker’s immense cinematic legacy, speculation only goes so far. Fortunately, Webber and Beavers occasionally travel with and exhibit the films in their original forms: I caught Bliss and Gammelion earlier this year courtesy of Los Angeles Filmforum and Redcat. Beyond that, well…there’s always Lyssaraia.

Posted in Columns, CS63, From The Magazine