Chuck Stephens/Columns, CS61, From The Magazine 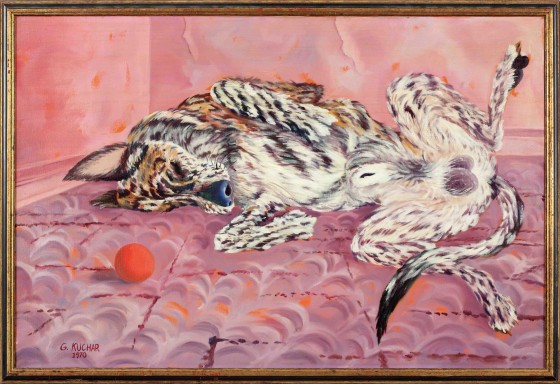 My dad smoked and didn’t like the movie Ben-Hur because it was lacking in simulated humping sequences. My mom liked Barbara Stanwyck and I don’t think she (Stanwyck) ever simulated humping either. My mom respected her.

In the 1950s everybody was making 8mm movies. You’d develop them cheap at the camera store and in five or ten years the emulsion would get cracked or chip in time for the 1960s, avant-garde film explosion. No need to bake your footage in an oven like so many artists were doing. Your home movies had already deteriorated into art.”

The ideal belated gift for that cinephile who may have slipped your mind during the seasonal savagery, The George Kuchar Reader might as well be the book beneath the burning Christmas tree at the climax of Kenneth Anger’s Fireworks (1947). It even features Santa Claus on its cover, seated next to the titular GK—the filmmaker most likely to appreciate the sight and scent of a burly, bearded man dressed entirely in red and sporting a conspicuously enormous sack. Published by Primary Information and edited by Anthology Film Archive’s Curator of Collections Andrew Lampert, the 300+ page Reader is a colossal compendium of comics, handwritten autobiographical sketches, scribbled script notes, lovelorn late-life emails, and myriad other mucilaginous miscellany. It’s the size of a small phone book. It also features a sexy, fold-out centrefold, which automatically makes it the best film book ever published—a sexy, fold-out, full-colour centrefold of George’s dog Bocko, which makes it probably the single greatest book ever made. No artist in the history of the world has treated with such tenderness and emphasis, such robust sensuality and paradisiacal detail, the cock and balls of a capricious canine as did the late George Kuchar, filmmaker, godstar, man.

Dog Star Man: an altogether different film with that title could have been made to immortalize the relationship between Kuchar and Bocko, a love story chronicled in Kuchar’s The Mongreloid (1978). An autumnal tone poem shot on both coasts, the film is a Bronx-to-Bay Area meditation on companionship, mortality, and the occasionally itchy “mookie” of man’s best friend, flush with jarring music cues and jagged editing decisions that presage Kuchar’s shift from film to edited-in-camera videotapes in the decade to follow. Bocko, beyond just that stunning centrefold—a gorgeous Kuchar painting of the splay-legged pooch and his mookie—is also at the heart of much that is recounted in and revealed by the Reader. He’s the star of a 1973 Kuchar comic strip entitled “Herzog Holiday: The Wonderful Story of a Woman and Her Dog” where, as “Bonzo,” he whizzes on his hapless owner’s broken carcass. And he’s the subject of Kuchar’s moving and wholly oneiric “Farewell, My Pet,” a tribute to Bocko and a portrait of the eerie events surrounding his death: visions of strange lights in the sky over Mission Dolores Park, the spooky apparition of a pigeon in the house, a screening of The Wolf Man on TV, the sudden passing of Bocko, and the arrival of a previously unknown “cousin” who, in Kuchar’s view, might well have been “vacationing” in San Francisco from outer space. Hardly an isolated incident, this confluence of extraterrestrial possibilities and altogether mortal concerns (the death of a loved one) confirmed Kuchar’s conviction that somehow The Movies were naturally aligned with other mysterious signs in the sky (UFOs, heavy weather phenomena), and that all of it was united by love. Smelly, funky, sloppy, gooey, passionate love.

There is much, much more to be discovered in this extraordinary volume, but we’ll leave those discoveries to you, along with these simple words: this is the most important film book of 2014, an essential addition to any cinephile’s collection. Alas, The George Kuchar Reader is published in a limited edition of 1500 copies, so if a gift copy still hasn’t materialized under your tree by the time you finish reading this sentence then by all means, take matters into your own hands.

Posted in Columns, CS61, From The Magazine