By Chuck Stephens In Columns, CS57, From The Magazine 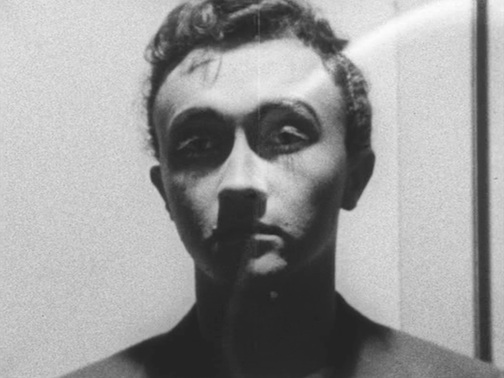 Death in a wig: it’s the central (if not always literal) trope of filmmaker extraordinaire Curtis Harrington’s haunted, horrifying, and sometimes hilarious career. From the experimental shorts he made as a youth to the strictly-for-hire studio freefalls he’d take later in life, all of Harrington’s cinema is a (not always intentionally) gleeful interface of the lurid and the ludicrous: mortification and madness topped off with a head full of chaotically coiffed curls. And with the arrival of Flicker Alley’s exemplary new DVD/Blu-ray double-pack The Curtis Harrington Short Film Collection, there are more of the master’s Medusa-locks available today than ever before.

Harrington (1926–2007) was obsessed with Poe and Baudelaire as a boy, began making films at age 16, and became friends with Kenneth Anger while both were still in their teens; the pair would soon become protégés of American experimental film doyenne Maya Deren. (“Whenever she’d come to Los Angeles I’d throw a little party for her,” Harrington recalled, “and provide bongo drums so that she could dance. Maya loved to dance.”) He went on to write a pioneering study of Josef von Sternberg, played Cesare the Somnambulist in Anger’s Inauguration of the Pleasure Dome (1954), was friends with James Whale, worked as Peyton Place producer Jerry Wald’s script doctor and right-hand man at 20th Century Fox, and made classic independent features like Night Tide (1961), in which Dennis Hopper is seduced by a mermaid beneath a boardwalk merry-go-round. Death in Venice, CA? You bet…with death (or his sister) in that wig never far behind: from the cross-dressing variations on Poe’s Fall of the House of Usher that Harrington made at either end of his life, to the episodes of Charlie’s Angels he cranked out for cash in the ’70s, and the garish matinee magic he made with old-school stars as bright as Shelly Winters and Debbie Reynolds in ornate thrillers like What’s the Matter with Helen? (1971). To paraphrase Jane’s Addiction, hardcore Harrington fans have seen this wig around.

Though P. Adams Sitney and others have long striven to position Harrington’s “official” directing debut, the USC-made 16mm short A Fragment of Seeking (1946), as half of a matched set with Kenneth Anger’s Fireworks, the films’ differences still sound louder. The precise production dates of the films have been blurred by time: Fragment was finished in 1946, Fireworks is dated 1947 (and not exhibited until 1948), though Harrington remembered Anger having made his film first. But where Anger’s film is all Tom of Finland-goes-chiaroscuro and comically phallo-totemic, Fragment is far more furtive about its desires. Deeply under the spell of Deren, Harrington’s black-and-white psychodrama of gender-ambiguous longing consists largely of the fresh-faced director himself—in a raincoat, fedora, and oddly outsized eyewear—cruising a woman (who sometimes becomes a man) through a sort of rooming-house/funhouse, where a murky mirror reflects back a filmmaker impossibly young: he was barely 20 when he made the film. Pensive, if already too grounded in horror-movie hokum, rubber skeletons, and those inevitable wigs to seem genuinely arty, Fragment might well be thought of as William Castle’s Meshes of the Afternoon (in Emergo!), if not Psycho (1960) foretold.

The wig at the end of Harrington’s mind has always been the elaborately lacquered liquorish-locks of von Sternberg’s Mother Gin Sling in The Shanghai Gesture (1941). Harrington even managed to teleport something of Ona Munson’s evil-of-the-Orient coiffure (along with Basil Rathbone and footage from a Soviet sci-fi flick) into outer space for his Roger Corman-produced Queen of Blood (1966). Those who’ve admired the montage of spiky, psychedelic paintings by the little-remembered ’60s surrealist John Cline that serve as Queen of Blood’s credit sequence will find their forerunners in The Wormwood Star (1955), Harrington’s portrait of artist/oculist/Alastair Crowley-ist Majorie Cameron. An artist’s study of another artist’s work not entirely removed from, say, Bruce Conner’s The White Rose (1967), The Wormwood Star pores over Cameron’s flowing forms and haunting lines with the intimacy of a lover’s last caress: Cameron burned almost all of her paintings not long after the film’s completion. This fantastic new Flicker Alley set performs a related rescue, hauling Harrington’s hardest-to-see work miraculously from the ashes.

Film/Art | In the Realm of the Senses: Mati Diop on Mille soleils Hard to Be a God (Aleksei German, Russia)