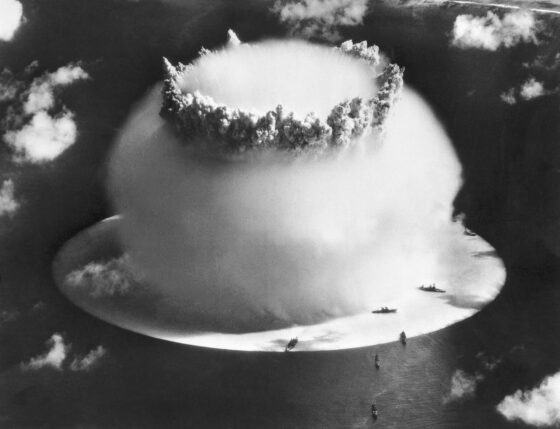 How many names can you call Bruce Conner? Surrealist, beat, prankster, poet, illustrator, assemblagist, filmmaker, punk. Spray-paint anything you like across Conner’s legacy and someone will think it sticks. A few years ago, a big brain from Harvard hilariously decreed this slipperiest of major American filmmakers a “structuralist” (never mind the centrality of “content” in, or the profoundly expressive and emotive strains running throughout, the artist’s work); elsewhere in the pages of this very magazine you’ll find musings on the “fascist aesthetic” in Conner’s A Movie. Myriad, sometimes mirthful, but often wholly misguided, such assessments litter the Google-field of old newspaper articles on the artist from New York to Los Angeles. Conner (1933-2008) reveled in the tipsy tumult of his ever-elusive “reputation,” sometimes billing his work as a “Dennis Hopper one-man show,” sometimes showing up at gallery functions claiming to be a hired hand merely impersonating the artist Bruce Conner. “When I did my show 2000 BC,” he told legendary underground publisher V. Vale in a 2005 interview now collected in the recently published Bruce Conner: The Afternoon Interviews (RE/Search Publications), “I saved all kinds of comments and reviews. On the same day, there would be a newspaper review saying I was an egomaniac and Jesus Christ, and in the same city another newspaper article would say that I’m a humble person and generous and self-effacing…You could fill up the United Nations with different points of view about what Bruce Conner’s work is: what it means, what he’s doing, what it is…”

Bruce Conner made movies about movies (A Movie), movies about movie stars (Marilyn Times Five, 1973), ecstatic movies about dancing and freedom (Breakaway, 1966), furious movies about fallen heroes (Report, 1967), and visionary movies about blindness, music, and joy (Cosmic Ray, 1962). Most of all, though, Conner made movies about death. Not for nothing do the words “The End” repeatedly fill the screen throughout A Movie, where jalopies plummet from cliffs, daredevils tiptoe across oblivion, and jouissance is a submarine captain’s response to a stag-film hottie: pushing the “Fire” plunger on a nuclear-tipped torpedo. If “found footage” was the cornerstone of Conner’s filmic endeavour, his greatest find may well have been the footage he obtained from the US government through the Freedom of Information Act: images of the underwater detonation of an A-bomb at the Bikini Atoll in 1946, filmed by some 700 cameras running at various ultra-high speeds and positioned at vantages from heaven to earth. From these, Conner chose the 23 shots that comprise his 37-minute mushroom-cloud minuet Crossroads (1976), a mortifyingly glorious pas de deux for celestial creation and terrestrial obliteration. Though only one of several masterpieces Conner created, Crossroads is, today more than ever, a major touchstone for Conner’s legacy-guardians, and UCLA Senior Film Preservationist Ross Lipman’s practical and theoretical account (for Artforum, available online) of the film’s latest restoration in 2013 is a must-read for any modern cinephile clambering across the film/digital chasm.

As I write these words, the Bulletin of Atomic Scientists’ Doomsday Clock—ostensible indicator of our political proximity to nuclear oblivion—sits at two minutes before midnight. We can feel it all around us, this closing-in. Far too many of our present moments have come to seem as if it’s all over but for the end credits. Sitting at the crossroads, both devil and naïf, Bruce Conner—prank-meister, punk polemicist, beatrealist, surrliteralist—laughed and saw it all a different way: destruction as creation. (So, unsurprisingly, did Japanese filmmakers from Ichikawa Kon to Fukasaku Kinji, all-too-proximal children of the atom bomb.) In Conner’s Crossroads, that nuclear spark was also the arcing of a projector lamp, that detonation another innately cinematic sudden lurch from idea into action, stillness into animation, fire into water into air, the crossroads of fading life and blinding light. Showtime!

Posted in Columns, CS74, Exploded View, From The Magazine