Robert Koehler/Columns, CS52, From The Magazine 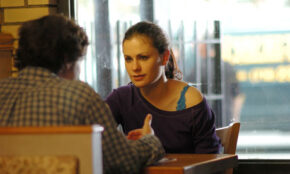 So, in the end, #teammargaret wins. Kenneth Lonergan’s Margaret, the first movie rescued from oblivion by Twitter, is now properly viewable. Initially released by Fox Searchlight on two screens in New York and Los Angeles last October with virtually no promotion, the famously beleaguered production appeared to be DOA until Slant’s Jaime Christley’s famously successful Twitter campaign stirred a hornet’s nest of critical intensity to raise the movie’s profile for awards season. The awards never came, but Margaret became a symbol for those who saw Lonergan’s work as a notable outlier in current American cinema, something that dared to stretch the standard three-act narrative into something more like five, and strove to delve into the turmoil of a conflicted 17-year-old girl’s mind by way of the prism of a study of a city—or at least, part of it, New York’s Upper West Side. Lonergan’s struggles, some of them of his own making due to his well-documented difficulties nailing down a cut with a running time under three hours, much of it from numerous outside forces ranging from meddling producer Gary Gilbert to legal issues that remains unresolved, lent Margaret the quality of a cause, particularly for daily critics whose exposure to art cinema is so proscribed that it only expanded their sense of the movie’s worth.

It’s frequently the case that such critics, due to their sadly meagre viewing diet, maintain a highly skewed view of cinema; in their universe, a Lynn Shelton movie can become some kind of masterpiece. Lonergan’s achievement is multivalent, but it can’t be understated that he has made the greatest American melodrama in at least a generation. This was my stance when viewing Margaret late in November on my MacBook Pro on a streaming video site; it was obvious that the movie, from its city symphony reveries to a vast assemblage of characters and situations to rival Altman at his most ambitious, needed to be properly seen on the big screen, but that, as with any great movie, its essential nature came through. Given those limitations, the majesty, emotional storms, and ideas in the movie roiled the attentive eye and ear, yet unavoidably left the impression that this wasn’t the entire work. Talk of a longer version was reinforced when the 2005 shooting script popped up online, revealing all sorts of sequences missing from the 150-minute theatrical version. Was this the longer version Lonergan had cut, or tried to cut, or just a blueprint of a movie that would never exist?

The answer, in the form of the highly anticipated new Blu-ray/DVD double-disc set, is the #teammargaret victory. While the Blu-ray contains the theatrical version, the DVD contains an “expanded cut” clocking in at 186 minutes. Lonergan has striven, surely out of a need to remain somewhat muted during ongoing legal battles, to explain that he’s fine with either version, and that the expanded version is not necessarily the “definitive” director’s cut. But any fair viewing of the Blu-ray/theatrical version and the DVD can come to only one conclusion: the expanded cut is surely better.

The new Margaret more fully and expressively conveys the work’s ideas, themes, and storylines, the dominant one of which entails a teenage girl’s crossing of a personal Rubicon from adolescent innocence into the adult world of moral uncertainties. Lisa Cohen, a smart and smart-ass student at an Upper West Side private school (played by Anna Paquin with an Olympian degree of intensity), is the kind of girl who can have her way with teachers (such as Matt Damon’s Mr. Aaron) and nimbly negotiate the terms of a date with insecure guys like John Gallagher Jr.’s Darren. But when she becomes involved in a fatal bus accident—she distracts bus driver Maretti (Mark Ruffalo), who hits and kills pedestrian Monica (Allison Janney)—life’s stakes are suddenly raised into high relief. Lisa’s fundamentally serious nature is confronted with a tornado of morally freighted emotions she can barely gauge, particularly when they’re complicated by her private, unarticulated guilt, and she resorts to the only strategy that her adolescent sense of justice, of hard rights and wrongs, can manage: to obsessively campaign for Maretti’s firing, recruiting Monica’s best friend Emily (Jeannie Berlin) to her cause.

Lonergan could have maintained his focus purely on this dramatic line, and crafted a fairly straight-ahead coming-of-age story. But Margaret is far more ambitious, a project interested in exploring novelistic narrative and willing to incorporate its central character’s highly contradictory and mercurial nature into its own cinematic grammar; a repeated chant of its critics in October that the film was woefully imperfect is a consummately dead-end argument in that the film devotes a great deal of its attention and energies to the phenomenon of imperfection, of how intelligent minds can be driven in all manner of irrational ways and assumptions, and finds a form to match this. Lisa is certain to drive the viewer nuts more than once: an extraordinary scene has Lisa in a knock-down, drag-out exchange with her mom Joan (J. Smith-Cameron), an acclaimed off-Broadway actor, displaying how Lisa brattily and cynically exploits Joan’s insecurities about going out on her first date in awhile (and with Jean Reno!). It’s a raw examination of Lisa’s pure, ugly bitchiness, the kind of thing that Lonergan has practiced many times on stage but which is almost never done anymore in American movies, including Lonergan’s previous, relatively tepid You Can Count on Me (2000). What’s notable about this scene is that Lisa insists on her dislike of opera, which she reduces in her very Lisa-like way to people proving how loud they can sing; yet a way of reading the unfolding drama of Margaret is how Lisa embraces an operatic version of life, until she finally learns both the absurd limitations of that approach as well as opera’s unique forms of emotional catharsis, upon which Lonergan concludes his epic with a flourish—and an apparent coming together of Lisa and Joan.

This storyline, involving mother and daughter, is one of several the movie traces with involving and harrowing detail, and that the expanded version properly allows space and time to fully emerge and resolve. The much-discussed deflowering scene of Lisa, who, amidst the post-accident trauma, gets it in her head to go to bed with Kieran Culkin’s arrogantly cool Paul, is fine and effective in the shorter version. But the longer one includes a fascinating post-coital exchange between the kids that’s mesmerizing in its patience and sense of how people behave second by second, in which Lisa gradually comes to realize that she’s disgusted by how Paul failed to don a condom as Paul puts clothes back on piece by piece, almost like a punishment. This previously trimmed scene is the necessary second half of a sequence that wrestles with Lisa’s botched attempt to take some control of her life by exploring sex, only to have to confront yet another unintended crisis.

Whole scenes of great fascination and meaning have been restored. Lonergan is intrigued with the possibilities of the zoom lens and sound in outdoor urban settings, but his most brilliant use of both is in an early scene (seen only on the DVD) in which the camera is situated at a high angle (not unlike a security camera) in a cramped eatery. Lisa and Darren can be somewhat detected sitting in a booth near the window, but the frame and soundtrack consider them at first as only a small part in a larger picture, taking into account several other diners, and even allowing the chatter of two elderly ladies to dominate the soundtrack, drowning out whatever’s coming out of Lisa’s lips. At other moments in the film, Lonergan’s camera begins on Lisa in the streets, and then loses her in the teeming sea of bodies and cars, or views her in long shots that reduce her to the size of an ant. In the café, she’s on the verge of uneasily delivering a verbal Dear John, but the city won’t allow her to be the centre of attention. The scene recalls Altman at his best, allowing the messiness of everyday public life to swallow up the story’s central characters, only to find them again, re-discovered and reclaimed, struggling to be heard above the din. While Margaret is unmistakably the work of a writer operating at titanic powers—the torrents of dialogue and raging exchanges in living rooms, over the phone, in classrooms, and on street corners are nothing short of Shavian—it also creates a filmic design of complexity to match its deliberately impossible heroine and its nerve-addled city environment, where pleasant dinner conversations can blow up into exchanges about anti-Semitism, or the camera can roam away from Joan and Lisa’s apartment and take into account the chippy relationship of the neighbours next door. In Margaret, everyone has her own opera.

Posted in Columns, CS52, From The Magazine