Celluloid Liberation Front/Columns, CS78, Deaths of Cinema, From The Magazine 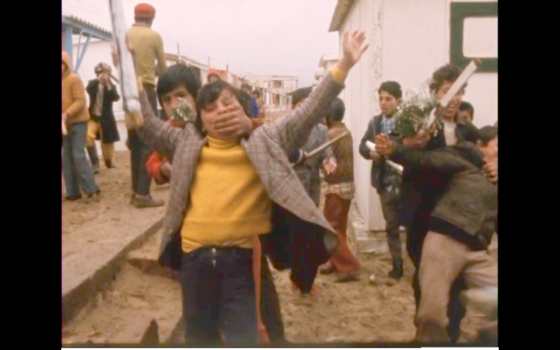 “There is something in borders and frontiers that magnetically draws me to them, while of course the utopia of a world in which these absurd divisions don’t exist is always on my mind,” pondered Jocelyne Saab in one of her last films, Imaginary Postcards (2015). This musing thought pretty succinctly sums up Saab’s artistic ethos, based as it was in a conscious understanding of division coupled with a humanism devoid of illusions. After completing her studies in economic sciences at the Sorbonne, Saab worked on a pop-music radio show before being hired by the Lebanese-American poet and artist Etel Adnan to work as a journalist and television newsreader. Unlike most war reporters, who must travel to war zones to pursue their profession, war came to Saab’s native Lebanon in 1975, and that same year saw the beginning of Saab’s filmmaking career with Le Liban dans la tourmente, a journalistic account of the various forces and interests behind the incipient conflict.

The war would last another 15 years, and Saab’s chronicling of its horrors—particularly in her remarkable “Beirut Trilogy,” comprising Beyrouth jamais plus (1976, co-directed with Adnan), Lettre de Beyrouth (1978), and Beyrouth, ma ville (1983)—is unequalled in both its ethical integrity and emotional impact. There is in Saab’s films something that goes beyond the obvious emotional implication of an artist observing her own homeland being ravaged by war, something even beyond the rare generosity with which she views all the participants in this and other conflicts. Perhaps it has something to do with how she was able to view modern wars absent the rationalizing logic of modernity—as she put it, “I broke with the Western way of seeing in my films, by going back to Arab narrative traditions: not like in the Occident with the beginning, the middle, the end.”

Saab captures the cruel surrealism of war through uncannily lucid expressions of its paradoxes. “The sole possible guarantee against death is to go into battle,” Saab observes in Beyrouth jamais plus, as she documents “a battle that takes place almost entirely at night, as if one was ashamed to kill his brother in broad daylight.” Painfully aware of the insoluble complexity of internecine war, Saab both stayed true to her leftist political sympathies whilst refusing to renounce her ability to empathize with the other side, defusing the driving force of fratricidal combat even as she recorded that hatred infusing new generations. “The older the war gets, the younger the fighters are becoming,” she notes; “It’s children who took the war in their own hands, even if it’s not they who decided to declare it.” “It will take forever for people to live peacefully again side by side,” one of these children matter-of-factly observes—a chilling testament to the way in which war so quickly rewrites the rules of normality, turns the unspeakable into the ordinary. Les enfants de la guerre, from the same year, offers another, as Saab follows young boys and girls on the spectral streets of Beirut playing the only game left in town: war.

Yet even as Saab so memorably illustrated the way in which war becomes a totalizing state, a spectacle that loosens the spectator’s hold on reality and rationality, she remained precisely attuned to the causes and interests behind what was, arguably, the first global civil war, one in which multiple foreign and regional powers had a stake. “Those who came to Lebanon trying to find solutions became additional problems themselves, rather than solutions,” she remarks in Lettre de Beyrouth, and she accords all these actors their own voices, even those who are clearly opposed to her own political convictions: not out of deference to some ideal of impartiality, but because she always remains conscious of the fact that losing the capacity to empathize—even in the heat of war, even with the enemy—would represent the ultimate defeat.

That Saab was able to do so in the face of the disintegration of almost all social bonds, with her country on the brink of total physical and existential annihilation, makes her accomplishment in the trilogy all the more remarkable. Saab’s most inspired work, Beyrouth, ma ville, shot “after West Beirut forced the Israeli army to show all its military strength, thus exposing its impotence,” is a missive from the end of world sent by someone who miraculously survived it. Capturing the metaphysical desolation that followed the Israeli invasion of the Lebanese capital, Saab manages to transcend the downward spiral of violence enveloping Beirut, sublimating its pain and reaching beyond agony.

The same candour and humanism Saab applied to the war in her homeland can be found in all her other documentaries. Through the polyhedric prism of her camera emerged a picture of a Middle East removed from both Orientalist conceptions and the reductive simplifications of identity (geo)politics: a place so rich, cosmopolitan, and diverse as to make Eurocentric provincialism appear even more ridiculous than it is. Les fantômes d’Alexandrie (1986), for instance, is a hauntological elegy to the cosmopolitan glories of Alexandria, a city that, thanks to colonialism and its proximity to southern Europe, was at one point a multicultural intersection where French, Greeks, Italians, English and Arabs (always last in their own land) lived together. The director speaks with the aging members of a belle époque that is no more, searching for its ghosts in the elegant cafés where old men can still be heard conversing in Greek. All the decadent splendour of colonial decor is, at the end of the film, measured against the misery of the city’s suburbs, too poor to be graced by the privileges of European culture, with religion the only hope granted to their inhabitants. Whether capturing Iran’s Islamic Revolution as it happens (Iran, l’utopie en marche, 1980) or the plight of Lebanon’s LGBT community (Café du genre, 2013), Saab always refrained from passing any judgment in the courageous attempt to understand, lending her sympathetic ear to the oppressed without ever dehumanizing the oppressor—for wherever there is beauty, squalor too is to be found, and where injustice reigns the seeds of liberation can always bud.

The (then socialist) nomads of the Polisairo Front and their struggle are the protagonists of Le Sahara n’est pas à vendre (1977), a documentary paradoxically funded by both Morocco and Algeria, the latter in favour of the independence of the Sahrawis from the former; unsurprisingly, the film doesn’t voice the official views of either government, but recounts the battles and daily lives of the inhabitants of Western Sahara. Sud Liban, histoire d’un village assiégé (1976) follows the Palestinian resistance against the Israeli occupation (which was at the time aided by Lebanese Christian Phalangists), but rather than focusing on the conflict Saab looks at its tedium and dwells on the resolute dignity of those who resisted against all odds. After the war reconfigured the whole country, politically and morphologically, in Il était une fois Beyrouth (1994) Saab tried to rescue the cinematographic memory of the Lebanese capital in the same year that cinema turned 100. While the amnesiac fury of neoliberal reconstruction was about to erase any trace of war from downtown Beirut, turning it into an empty ghetto of spectral luxury, Saab opened an imaginary site of cultural preservation. “I make images. First, they were war images, and then I started to invent them, because when everything was destroyed in front of my eyes, I couldn’t collect the real anymore. I had to reinvent everything. This is how I moved into fiction.” Two young girls visit an old movie theatre and its cinephile manager to go through its archives as the cinematic life of Beirut parades on the screen, debunking the myth of the city as “the Paris of the Middle East.” In a country where the memory of war remains a disputed and highly flammable territory, the film serves as a shared repository of the filmed images of a city that is no more.

Saab’s curiosity took her well beyond the Arab world, yet she always pursued subjects close to her heart and the causes she maintained solidarity with. La dame de Saigon (1996) is a portrait of Dương Quỳnh Hoa, health minister of the Provisional Revolutionary Government of the Republic of South Vietnam, a woman who, after having fought the Americans, continued in her struggle outside the Communist Party. “We had the illusion of power, but only the illusion. You don’t really have power,” the sprightly lady replies when asked why she decided to leave institutional politics to continue fighting injustice. No longer young, she continues serving the people through medicine and catering to those who were left behind, even under communist rule. Very much like Hoa, Saab continued fighting to the very end, putting her work in the service of the downtrodden. One of her very last works, the 2017 photographic exhibition One Dollar a Day, exposed the brutality and squalour Syrian refugees are forced to live in, abandoned by the Lebanese government much as the Palestinians have been for the past 70 years, blamed for everything—from unemployment to diseases—and forgotten by most. Not by her, though. Not by Jocelyne Saab.

Posted in Columns, CS78, Deaths of Cinema, From The Magazine