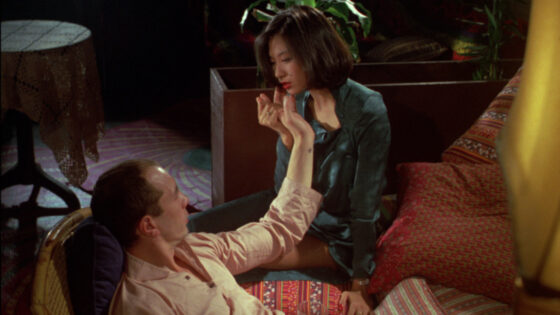 Early in One Night Stand (a.k.a. Alibis), the 1977 feature directing debut of Pierre Rissient, the following dedication appears onscreen: “To Harry d’Abbadie d’Arrast, Movie Business Casualty.” A name now all but erased from the cinematic fossil record, d’Arrast was the Argentine-born, French-Basque filmmaker who came to Hollywood at the end of the silent era, worked as an assistant to Chaplin, and eventually directed seven American features of his own (including 1930’s Oscar-nominated Laughter) before retreating to Europe and disappearing into obscurity. D’Arrast was said to be a Lubitsch-esque master of the sophisticated romantic comedy, but also a Stroheimian perfectionist who clashed repeatedly with studio brass—among other indignities, he was fired from directing 1933’s Hallelujah, I’m a Bum because he wanted to replace star Al Jolson with a then-unknown vaudeville actor named Fred Astaire. But d’Arrast left enough of a trace to become one of Pierre’s enthusiastic causes célèbres—and a test case for the sort of films and filmmakers to whom Pierre devoted himself throughout his careers as critic, programmer, publicist, festival consultant, and production executive. Look across the breadth of Pierre’s efforts and you will find many similar “casualties”—of the business, of critical groupthink, of political oppression—along with his tireless work to reverse, recover, resuscitate.

That is the connecting tissue that binds the survivors of the Hollywood Blacklist (many of whom Pierre befriended and championed) to forgotten mavericks like d’Arrast and the Czech Gustav Machatý (whose 1931 From Saturday to Sunday was considered by Pierre to be among the most advanced of all early talkies), and to modern masters like the Philippines’ Lino Brocka, Malaysia’s U-Wei Haji Saari and Sri Lanka’s Lester James Peries—directors from countries whose entire national cinemas were, at the time Pierre began advocating for them, barely blips on the radar of even the most seasoned film festivals and cinephiles. It was a passion that never dulled: in 2015, when the Telluride Film Festival offered Pierre a carte blanche, he chose to screen Siti, a low-budget, black-and-white second feature with no major-festival pedigree by the young Indonesian director Eddie Cahyono. And the joyful welling of emotion on Pierre’s face as the lights came up—the beaming, parental pride—is the image that has come back to me perhaps more than any other in the weeks since Pierre’s death.

I first met Pierre at the 2004 Rotterdam film festival, shortly after I had become the film critic for the L.A. Weekly. For the next 14 years, he was a constant in my life: a friend; a mentor; a prankish uncle; above all, someone who fundamentally changed the way I looked at and thought about movies. Many were the mornings that would begin with an early call from Paris, with Pierre’s booming baritone on the other end of the line: “What is the news in Los Angeles?” Or “What have you heard about Clint’s new picture?” Or “Have you ever seen a 1932 picture by Alfred E. Green called Union Depot? I am watching it on TCM and it is quite interesting.” And I was far from alone. Indeed, while “rolling calls” may be a film-industry norm, one suspects few daily phone sheets were as wide and varied in their reach (both geographically and cinematically) as that of Pierre, who might hang up with me to then check in with Quentin Tarantino about their shared enthusiasm for the French-Russian (by way of Hollywood) director Léonide Moguy—another “movie business casualty” if ever there was one. And whenever Pierre rolled into town—be it New York or L.A. or one of the countless festivals whose invitations he could never refuse—there would be strict instructions to attend this or that archival screening, or some carefully orchestrated lunch or dinner where one might find oneself conversing with the centenarian actor/producer/director Norman Lloyd, the French translator of Keats, a San Francisco software engineer who moonlights as a film historian, or any of the other hundreds of people Pierre gathered around him (a curator not just of movies, but of life) for no reason other than that he found them all interesting.

Pierre had his personal pantheon, to be sure, starting with the “Four Aces” whose portraits (reconfigured to resemble playing cards) graced the entrance of the Cinema Mac-Mahon, where Pierre and some similarly movie-mad friends, barely out of high school, convinced the owner to let them commandeer the programming in the ’50s. (A half-century later, he could still recall, with astonishing vividness, the specific details of films seen in those years, and even the quality of the prints in which they were screened.) But as implied by the oft-cited (and, by his own admission, probably apocryphal) Rissient-ism, “It is not enough to love a film; one must love it for the right reasons,” Pierre was less interested in what movies you liked than in why you liked them. He was at his most eloquent when talking about the art of direction—especially the precise “emotional distance” that could exist between the camera and the subject. This was the quality he valued the most in directors as otherwise disparate as Hawks, Ophüls, Ida Lupino, Jane Campion, and Lee Chang-dong—and why he was less impressed by those (Hitchcock among them) whom he felt relied on overt stylistic flourishes to disguise a lack of depth/poetry/intuitive feeling.

One way or another, Pierre touched the careers of all the directors mentioned above, and dozens more: Charles Burnett, Hou Hsiao-hsien, King Hu, Im Kwon-taek, Abbas Kiarostami, Mike Leigh, Sydney Pollack, Jerry Schatzberg, Edward Yang. Which is to say nothing of the many critics, programmers, historians, and just plain film buffs he encouraged, championed, and for whom he was always available as an invaluable first-person resource. Most of that work was done to the absence of any official credit—in life, as in the Palais des Festivals, Pierre always preferred to take the side entrance. But notoriety, to say nothing of financial gain, was pretty low down on his priority list. Yet, in the last decade—and not entirely unwillingly—Pierre managed to catch a bit of the limelight he’d spent so much time foisting on others. He was the subject of two documentaries, Todd McCarthy’s Man of Cinema (2007) and Benoît Jacquot, Pascal Merigeau, and Guy Séligmann’s Gentleman Rissient (2016), that form a superb diptych: the first American and focused on Pierre’s impact on international film culture; the second French and focused on Pierre himself, talking about the films and filmmakers that inspired his love of the form. There was also a fine volume of interviews, Mister Everywhere, by the critics Samuel Blumenfeld and Marc Bernard, which pleased Pierre so much he had spoken of a possible sequel.

Along with that, Pierre’s brief but hardly negligible career as a filmmaker himself began to re-emerge too. Through the efforts of his devoted former assistants, Nicolas Pariser and Benjamin Ilios, a copy of Pierre’s delightful, proto-Rohmerian short film, Les genoux d’Ariane (1960), was uncovered in an archive at the Sorbonne. Improbably enough, One Night Stand made its way on to a bare-bones DVD release in the US. And at Cannes this year, Pierre’s second feature, Cinq et la peau (1982), was screened in a restored print, 36 years after premiering in Un Certain Regard. Given the focus of the Mac-Mahonists on those terse masters of film noir and action cinema, it may come as a surprise for some to discover Pierre’s literary, poetic strain—something closer, in a way, to the films of Claire Denis (another great friend and enthusiasm of Pierre’s), Bertolucci, or even Malick (Cinq is all images and voiceover without a line of direct dialogue). Both features are erotic dramas focused on white foreigners adrift in the Far East (Hong Kong in One Night Stand, the Philippines in Cinq)—and one needn’t look too hard to see Ivan, the protagonist of Cinq (played by Pauline à la plage [1983] star Feodor Atkine) as an avatar of its auteur, from his loose-fitting casual couture to his status as a kind of fixer/go-between for powerful interests, living out of luxury hotels and falling deeply under Manila’s seductive spell. Both movies were also bedeviled by financial problems and poor distribution, but there were plans for more—one, Transit, was developed as a vehicle for Michel Piccoli, who would have played an airline pilot travelling throughout Asia—though none came to pass. When I once asked Pierre why, he answered, simply, “Life.”

“I sort of have the feeling it symbolizes the end of an era when we all thought cinema is the most important thing in the world and our sacred duty is to safeguard its purity from all the dangers lurking in the shadows,” a critic friend wrote to me in the days following Pierre’s death. I understand the sentiment, but I am encouraged to think otherwise—that all of us who were touched so generously by Pierre will keep that spirit, that sense of sacred duty, alive for at least a little while longer. For that, I can only repeat the last words I spoke to Pierre when I visited him at his hospital bedside: merci pour tout.