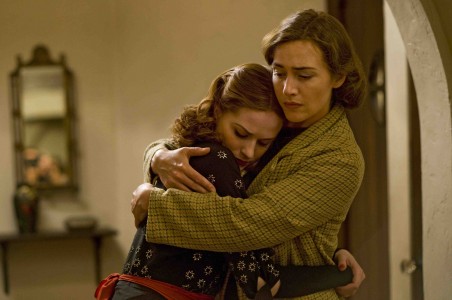 In “The Boys in the Back Room,” a famous essay written in 1940, Edmund Wilson damned James M. Cain’s work with faint praise by referring to the hard-boiled novelist as a “writer for the studios” whose “novels are produced in his off-time…they are a kind of Devil’s parody of the movies.” Yet while Cain worked on mostly humdrum projects at several studios throughout the ‘30s and ‘40s, other screenwriters were responsible for the scripts based on his most famous novels—The Postman Always Rings Twice (1946), Double Indemnity (1944), and Mildred Pierce (1945). In fact, his true cinematic legacy probably lies with the fact that these novels provided a malleable narrative template for generations of otherwise disparate filmmakers ranging from, among innumerable examples, Visconti and Petzold to Wilder and Kasdan. We only need to hear phrases such as “amoral drifter” or “shifty insurance investigator” to summon up the boundaries of Cainland.

Mildred Pierce (written in 1941), despite the penchant of publishers and booksellers to classify it as genre fiction, was not a mystery or crime thriller but instead blends naturalism with melodrama that verges on hysteria but never quite goes over the top. The story of a once upper-middle-class housewife impoverished by the aftermath of both the 1929 crash and her realtor husband’s financial ineptitude is a stripped-down version of a Theodore Dreiser potboiler. The uninflected prose keeps readers hooked on a barrage of details that accompany the heroine’s relentless upward mobility, her troubled relationships with several shifty men, and, most importantly, a titanic struggle with Veda, her snobbish and ungrateful older daughter. The novel’s steamy mélange of extramarital dalliances and implied incestuous longings, coupled with a savvy awareness of class distinctions in supposedly egalitarian America, was obviously a combustible brew for Hollywood during the ‘40s. Michael Curtiz’s highly compromised, if nevertheless entertaining, adaptation represents the apogee of the “genius of the system” for film historian Thomas Schatz. Curtiz, producer Jerry Wald, and Warner Bros.’ key technicians managed to circumvent the minefields of the Production Code by blending the conventions of the “woman’s film” with film noir and transforming Cain’s disturbing moral ambiguities into a star vehicle for Joan Crawford as a self-sacrificing super-mother.

Few directors are as cannily self-reflexive as Todd Haynes, whose five-part HBO adaptation of Mildred Pierce reinvents Cain for a new generation with audacious finesse. (In a recent Artforum interview, he cites reading Lacanian feminist Pam Cook’s essay “Duplicity in Mildred Pierce” as a seminal influence.) While even Cain’s admiring biographer Roy Hoopes claims that the novelist’s colloquial dialogue doesn’t sing onscreen (and Raymond Chandler felt obliged to make the repartee in Double Indemnity considerably snappier for Wilder’s movie), Haynes and his co-screenwriter Jon Raymond include large swatches of Cain’s original banter with genuine success. If some critics felt that Far from Heaven (2002) was a bit too much of an on-the-nose retro homage to Douglas Sirk or that I’m Not There (2007) was an exercise in empty virtuosity, it will probably be more difficult to lob similar accusations at Mildred Pierce, a scrupulously faithful adaptation of Cain’s novel with no trace of snark. This is not because Haynes has become less preoccupied with raiding film history and the vicissitudes of pastiche; it’s merely the case that the film’s resourceful allusiveness, which references the Hollywood movie brats’ vision of the Depression, large chunks of Fassbinder, and the aesthetics of long-form cable dramas, cannot be reduced to a one-dimensional gimmick. For attentive viewers, Haynes offers a multiplicity of entry points: the reverberations of the ‘30s within the ongoing Great Recession, a scary view of dysfunctional family dynamics, a highly ironized look at the machinations of show business, and a mordant commentary on the early stirrings of contemporary consumerism—to name only a few tangible thematic tributaries.

Rather surprisingly for the quintessentially postmodern Haynes, the not-so-hidden injuries of class nearly trump the ramifications of gender. Even production designer Mark Friedberg’s conception of the Pierce domicile in Glendale, the Los Angeles suburb despised by social climber Veda (Morgan Turner as her childhood incarnation and Evan Rachel Wood as the adult ingrate), reinforces the protagonists’ pretensions. Ensconced in a preternaturally dark Spanish-style bungalow, Mildred (Kate Winslet, who looks uncannily like Barbara Stanwyck when photographed from certain angles) and her brood are overwhelmed by bulky furniture and are constantly in the shadow of what, to my uncertain eyes, looks like an Albert Bierstadt print of animals gamboling in the Old West—this is less of a home than a fading showroom of flimsy affectations. During her pilgrim’s progress from humble waitress to nouveau riche head of a restaurant empire, she gradually escapes from the confines of this lair and takes on the Southern Californian haute bourgeoisie.

In a key scene from the first episode, Haynes’ chilling recreation of one of Cain’s best-observed set-pieces highlights both Winslet’s talent and the material’s artful delineation of the semiotics of snobbery. Applying for a job as a housekeeper, her prospective employer, a wealthy matron named Mrs. Forrester, seems more like an imperious medieval monarch than a rich broad looking for a servant. During the interview, Winslet’s visage goes from relative composure to undiluted panic; when she tries to flee and Mrs. Forrester insists, “The Mistress terminates the interview, Mildred,” the seeds of the plucky heroine’s entrepreneurial zeal have been firmly planted.

Although James Naremore maintains that Cain treats his characters with “Flaubertian detachment,” his novels’ preoccupation with money is positively Balzacian. Haynes’ treatment of this dynamic, like Cain’s, is less bound up with Marxism than a Veblenesque emphasis on the intricacies of status and consumption. After ditching Bert (Brían F. O’ Byrne), her mild-mannered but ineffectual and philandering husband, Mildred’s evolution as a material girl is modified by her choice of lovers. Her first dalliance with Wally Burgan (James LeGros, considerably more slovenly and fleshy than the smooth operator portrayed by Jack Carson in the Curtiz version, conforming to Cain’s description of him as a “fat blob”) aids and abets her ascension as a chicken-and-pie mogul; it’s less of a romance than a business partnership. Her subsequent, more erotically charged, relationship with cynical playboy Monty Beragon (Guy Pearce) immerses her in a conflict between her Protestant work ethic and her lover and eventual husband’s contempt for menial labour and fondness for what Veblen termed “conspicuous leisure.”

An unashamed man of leisure, Monty evokes decidedly ambivalent feelings in Mildred. According to Cain, “She had a complex on the subject of loafing, and hated it, but she detected there was something about this man’s loafing that was different from Bert’s loafing….this loafing wasn’t a weakness, it was a way of life and it had the same effect on her that Veda’s nonsense had; her mind rejected it, and yet her heart, somehow, was impressed by it; it made her feel small, mean and vulgar.” There’s no doubt that Monty’s peculiar pose as some sort of Californian faux-aristocrat (who will eventually show his colours as a penniless gigolo) also intensifies his sexual appeal for Mildred. But in a somewhat uncharacteristic departure from Cain’s feigned neutrality, Haynes ups the rhetorical ante by placing President Roosevelt’s denunciation of “unscrupulous money changers” from his 1933 First Inaugural address on the soundtrack as Monty prepares for a polo outing.

Given the leisurely pacing allowed by HBO and the fealty to the original text, the Veda who emerges in Haynes’ Mildred Pierce is considerably more nuanced than Ann Blyth’s irredeemable bad seed, the character audiences love to hate in Curtiz’s pale noir. Evan Rachel Wood’s Veda, in sync with Cain’s unsentimental stance, is a blatantly grotesque appendage of Mildred’s own aspirations. When Mildred tenderly kisses Veda in bed after her daughter is on her way to a triumphant career as an opera singer (a moment that academics will no doubt christen the “queering of Mildred Pierce”), it is less homoerotic or incestuous than a function of one character gazing at her own funhouse reflection.

Claiming to be influenced by the “long-lens naturalism” of ‘70s films such as The Godfather (1972) and Chinatown (1974), Haynes’ style, augmented by cinematographer Ed Lachman’s muted colour scheme, is relatively restrained. The most antic stylistic flourishes seamlessly blend the oneiric and the naturalistic; a moving camera shot of caged chickens to be purchased for Mildred’s restaurant is both seemingly gratuitous and an apt emblem of her deftly Taylorized take on the chicken dinner. (As Cain recounts her system, “she packed breasts, drumsticks, second joints, and wings into four different dishes, and placed them in the icebox so she could pick up a portion with one motion.”) But Haynes’ talent for balancing intimacy with a distancing mise en scène in which the actors are viewed through windows, bars, or mirrors is gloriously Fassbinderian. Mildred may be less calculating than Maria Braun, or less of a victim than Martha in the Fassbinder film of the same name. Nevertheless, Mildred Pierce manages to balance operatic intensity with analytical prowess—it captures our current anxieties without falling prey to a Mad Men-like tendency to treat the past with blithe condescension.