Andrea Picard/Columns, CS48, From The Magazine 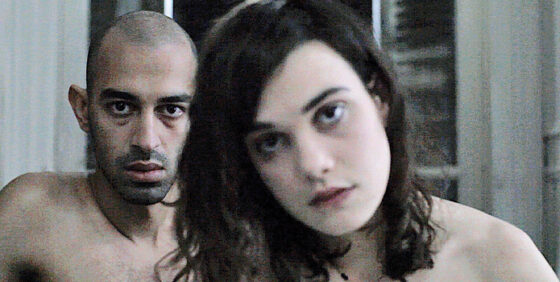 “Art is like a fire; it is born out of what it burns.”—Jean-Luc Godard, JLG/JLG

Mining the proverbial depths of despair is a romantic mainstay of artistic production, period. In the cinema, Béla Tarr has mastered miserabilism (for better and for worse) and as much as we want and expect another great film from the dour Hungarian, The Turin Horse does appear to be a likely last outing in a “Where do we go from here?” equation. That Nietzsche served as fodder makes Tarr’s last film pronouncement all the more believable, accompanied by howling winds strong enough to annihilate society as a whole and a single boiled potato for our meagre Last Supper. Yet, pessimism by way of contemporary philosophy (itself of the pessimistic persuasion) is more of a French specialty, especially when contemporaneity is wracked with repressive guilt and the spectres of a sodden history, the trespasses of the Occupation never distant. An interesting comparative study could be made between Godard’s Film socialisme (2010), with its veneer of essayistic opacity and its playful irreverence toward its own enjeux, and Nicolas Klotz and Elizabeth Perceval’s Low Life, a stylized, neo-gothic nocturne with traces of trance and a healthy dose of soixante-huitard nostalgia. The former has a significant cameo by Alain Badiou, while the latter quotes him and a host of other philosophers and writers in a pseudo-Nouvelle Vague (1990) literariness of fragmented, floating citations and abstracted monologues.

Godard may have been kidding when he suggested that his preferred method of dissemination for his latest film was to send teenagers out in a hot air balloon and have them land randomly with copies in hand. But the implication was clear: that the cinema should function as an intimate and meaningful encounter with individuals, not as a mass block (or a block of mass), that the space of discourse needed in today’s world is rarely accorded. Klotz and Perceval have, in some ways, enacted this scenario by engaging in a socially aware cinema from the ground up. Profoundly philosophical—Agamben, the philosopher also known for his cameo in Pasolini’s The Gospel According to Saint Matthew (1964), was the driving spirit behind their last film, La question humaine (2007)—their films harbour the influence of their peers, such as the prolific art historian Georges Didi-Huberman, with whom they have conducted workshops and pre- and post-film discussions. That “pre” is not prior to projection, but prior to shooting. Field research has always been an integral part of the duo’s writing-filmmaking process; their longish gestation periods are spent on roving workshops and feedback sessions with (non-)actors, classrooms, and philosopher friends.

As was the case for their oddly beautiful and radical trilogy consisting of Paria (2000), La blessure (2004), and La question humaine, their latest film, Low Life—the first to bear both their names as director—grew out of theatrical exercises and collaborative research. In 2009, Klotz and Perceval held a residency at the controversial CENTQUATRE, an artist incubator in the former Pompes funèbres de Paris in the 19th arrondissement, a gorgeous, labyrinthine space consumed by closed-door artist studios, which also recently housed filmmaker Sylvain George, there to edit some of his Qu’ils réposent en révolte (figures de guerres)—reviewed and interviewed in the last issue of Cinema Scope and sharing in many of the duo’s concerns—and formidable young critics Antoine Thirion and Eugenio Renzi with their online journal Independencia, so titled after Raya Martin’s film. (Oh yes, and Tricky was there once too, with naked photos of himself posted to the concrete walls…)

Klotz and Perceval’s time there as artists-in-residence was spent researching and laying the groundwork for Low Life, a continuation of their political preoccupations and themes, such as a literal body politic (where carnality is carrier and transmitter of historical trauma, especially illegal bodies), language laden with aphoristic truisms, and disaffected and disenfranchised people, in this case les sans-papiers living in the underworld of Lyon. As a confused, communal group of young friends and lovers who largely live by night freely exchanging wine for café in the morning, ebb and flow between languorous existential musings, meaningful encounters, barricading illegal squats and revelling in an intoxicated haze, the film eludes its own present by conflating France’s pressing issue of the day—Sarkozy’s puerile and abhorrent approach to immigration—with a ‘60s-era verve for revolution. Cross-pollinating Bresson (Le diable probablement, 1977), Pedro Costa (In Vanda’s Room, 2000; Colossal Youth, 2006) and Philippe Garrel (Les amants réguliers, 2006) by way of Jacques Tourneur (I Walked with a Zombie, 1943), Jean Rouch (Les maîtres fous, 1955) and Peter Watkins’ ethos and obsession with a mediatized society, Low Life is surprisingly, perhaps even treacherously, original while steeped in myriad literary, philosophical, and cinephilic references.

It all begins with Antigone (yes, Straub-Huillet are couched in there too, in solidarity, but also because of Notre musique [2004]), barefooted and goldilocked as she ambles down a darkened street, her eyes wild with abandon and emitting an intensity vacillating between life and death. She’s bewitched by her text; the lines of desperation that she repeats are not hers alone, though she incarnates them as ferociously as if her life depended on it. A haunting preface: Low Life is a portrait of an ambling youth, entranced by today’s society, adrift in a world of undetermined ideology and whose value system exists far below the surface (hence the film’s title). Caught up in a sort of tropical malady and stoking the embers beneath their inherited ruins, these youths depend on love, as well as their impulse to mitigate against society’s injustices in order to combat the phantasms of emptiness, however naïve or altruistic. Proving Bresson’s dialectical statement about two types of film to be false (or, at least, too reductive), Klotz and Perceval adeptly use theatrical artifice in order to create rather than simply reproduce. Low Life is replete with bold facial close-ups and staid scenes that defy their own theatricality, that are raw, intimate, stylized, and disarmingly hungry despite their torpour. The film’s affectations are not dissimilar to those in Le diable probablement; in fact, the latter’s suicidal protagonist Charles and ecological clarion call are both subsumed in Low Life as a regenerated and regurgitated form of pessimism toward our contaminated present. (Bresson had said that he was pressed to make the film, which was infamously banned in France for incitement to suicide, because of “the mess we made of everything,” and “the shocking indifference of the people, except for certain young people of today, who are more lucid.”)

Bresson’s film is admittedly also about beauty—physical beauty, angelic and doomed. His Charles, with his long, straight hair and dreamy stare, is ethereal, not unlike Low Life’s Charles, who, spurned by his lover Carmen, drifts alone in a depressive state. As he listens to his iPod and perches on the base of a marble statue, his gaze turned upward and legs dangling below, the camera fixes him from a low angle, a heavenly, monumental sight to behold. (Whether or not we accord him gravitas is another matter.) Meanwhile Carmen, with her black, lacy clothes and sooty, big eyes, is an apparition from Nosferatu (1922) or an early Lang, a dark yet luminously expressionistic gamine. While protesting a raid on a squat, she meets and immediately becomes spellbound by Hussain, a magnetic Afghani poet who is studying in France illegally. Their affair is intense, fuelled by their bodies and their minds. “Poetry reminds me how things can be different,” says Carmen as she watches over Hussain, his looming deportation threatening to put an end to their consuming affair. He has seen what she has not, and it is his gaze, deep, sensible, and troubled, that has the power to heal. His thesis on Hölderlin’s silence attests to a silent civil war being waged, and to the gods haunting a mythic world: a world of voodoo and black magic that suffuses this clandestine life beneath society’s surface. There are many forces at work, conspiring, constricting, policing, inexplicable and unreal. Can love resist them all, or at all?

Before moving in with Carmen, Hussain was living in a squat filled with illegal African immigrants. A zombified teenager, Julio, was accorded Hussain’s room so that he could recuperate from an unknown sickness. Rounded up by police during a raid, he was taken to hospital where X-rays of his bones determined his age to be 18 years rather than the 15 years that he and his mother thought him to be, making him susceptible to legal expulsion. These tests and machines, bewitching and suspicious, have rendered him catatonic, brought under the spell of a militarized science. Surveillance, too, plays a large part in the film as the tracking of bodies evokes the horrors of the past, ostensibly leading back to the Occupation. The loss of self in society as a result of mass corporatization, combined with the crackdown on immigration, has resulted in a land of living dead. If the mind cannot resist, can bodies do so? Hussain shaves his head, not as a sign of madness, but of strength and wanting to be naked in front of the woman he loves; he shaves her sex in return as a gesture of intimacy. A raw and startlingly guttural flamenco performance early on in the film captivates Charles’ attention, providing a jolt to his catatonic malaise. A clubby dance scene (virtually a prerequisite in contemporary French cinema; remember the utterly astonishing rave sequence with Mathieu Amalric in La question humaine, or Monica Bellucci’s steamy dirty dancing in Garrel’s hot-coloured and -blooded Un été brûlant) which begins with a harsh cut to a medium shot of a DJ sporting headphones and singing a haunting air into a microphone, allows and calls for ultimate release: bodies moving, sentient, seeking freedom, expression, and sex.

Just as its characters ebb and flow, so too does the film between a feverish sense of paralysis and a mounting fervour, sometimes clenched and awkward, or strangely unfettered. With its heavy, wafting non-diegetic use of original music composed by Klotz and Perceval’s son Ulysse (somewhat evocative of Joy Division and its brooding ilk), its laden and literary dialogues, and its bursts of startling images—such as a closetful of squatting children with their faces covered in glow-in-the-dark paint, or Julio perfectly positioned in front of an empty blue wall—Low Life is a trance, burnished-coloured zombie film as if painted by Manet (the flamenco dancer could have been one of the painter’s subjects in a previous lifetime), a film that boldly confronts a gunmetal dystopian present-day future, cold and dehumanized with an amber, velvety texture. Distortion between words and images is reminiscent of Tourneur’s moody use of music and environment; in addition to his I Walked with a Zombie, Klotz and Perceval used Victor Halperin’s White Zombie (1931) and Todd Browning’s Dracula (1932) as pre-production referents. Unlike the zombification in Chantal Akerman’s latest, La folie d’Almayer, based on Joseph Conrad’s first novel and starring an actorly Stanislas Mehrer who is barely surviving in his opium fog, the living dead of Low Life engender disquiet but also great empathy for their attempts to see clearly despite all the cruelty and confusion. Akerman is a master of madness, while Klotz and Perceval posit a tertiary space somewhere between reality and rationality. Their mannerist mortification won’t be for everyone; Low Life mixes documentary desire with an unbridled romance (the French Romanesque is more apt here) that takes off from La maman et la putain (1973) and veers into highbrow theoretical territory. It’s a fascinating, dissonant, and exceedingly idiosyncratic (both gutsy and presumptuous) approach to the infernal hemorrhaging of society. When a death spell is cast upon expulsion papers, that death comes swiftly and defies toutes les règles du jeu.

Posted in Columns, CS48, From The Magazine