Olaf Moller/Columns, CS43, From The Magazine 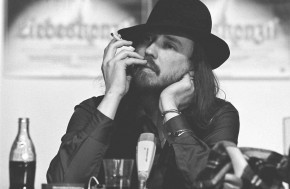 In the end, Werner Schroeter’s demise on April 12 did in fact come as a surprise. Over the last few years one had seen him so often so close to death only to regenerate (it seemed) splendidly, and one began to believe that somehow things could and would go on like this, that he’d slowly regain his health, win his battle against cancer, and get well again. These hopes were nourished by his fighting work ethic: whenever he had enough energy, he’d throw himself into a new project, a film or a theatre production, which would invariably end up with him being again drained of almost all his life and back again facing the end. Others would probably have seen to their convalescence first, and only afterwards considered new endeavours. But for Schroeter, death was a certainty that one should face head-on, by taking whatever experiences and adventures life (still) had to offer. A new film, after all, was a new film; or as Dietrich Kuhlbrodt once put it in the title of a seminal essay, “Lived Experience: On Dealing with Werner Schroeter’s Work, Which Is to Say His Life.” Death, decay, man’s will to overcome what’s deemed to be certain, the vanity of such striving and its desperate glory, which is the one stab at true transcendence we are granted in life: that’s Schroeter, and that’s his eternity for us.

Born roughly a month before the end of World War II (April 4, 1945) in Georgenthal, Thuringia, Schroeter rarely spoke about his life, whose biographical aspects he enjoyed playing around with. Psychology for him was anathema: nothing of that sort should stand between the viewer and his film/production, as all that mattered was the visible and the audible. Schroeter was right in that biography too often provokes false certainties, misleading or one-dimensional readings of a work of art, usually ones uninterested in melos’ reality or its might. Still, a few facts from his early years seem certifiable, some stories so dear to Schroeter’s heart that they deserve to be believed and repeated. It is said that he got his first camera at the tender age of 12, even if it seems more likely that he got it at 18, at Christmas 1963 (the camera was an Eumig 8mm with revolving objectives). It is true that he finished high school in Heidelberg, studied psychology (!) for three semesters in Mannheim, and passed entry exams for the Munich film school, but dropped out after a few weeks. And though he certainly attended the experimental film festival at Knokke-le-Zout in December 1967, it’s impossible to prove, as he claimed, that he screened a short there called Zwei Katzen, for there’s no trace of a Schroeter film to be found in the Knokke program—even if that means zilch, as people who were in attendance will tell you. (Zwei Katzen might be one and the same as 1967’s Verona, the earliest surviving Schroeter film, a home movie of sorts more interested in statues than people.) The festival’s main importance for Schroeter lay in the filmmakers he met there, in particular Rosa von Praunheim, with whom he was close for a while and then grew distant, just as he did with Rainer Werner Fassbinder, who robbed him of doing his Querelle de Brest; with Daniel Schmid, Peter Kern, and writer/producer Peter Berling, Schroeter always remained close, however stormy their relationships were (among the many promised Schroeter works we’ll never see is a theatre production featuring Kern as Orson Welles).

Between 1967 and 1969, Schroeter shot some 20 films, almost all short or medium-length, first on 8mm, then on 16mm, some silent, some with separate sound on tape. A few titles: Callas Walking Lucia, Maria Callas singt 1957 rezitativ und Arie der Elvira aus Ernani 1844 von Giuseppe Verdi, La Morte d’Isotta, Himmel hoch, Paula—Je reviens, Neurasia, the double projection Argila (all 1968), Eika Katappa (1969). The Standard-8 works were almost never screened, and some are even considered lost—though Grotesk – Burlesk –Pittoresk (1968), a collaborative effort with von Praunheim, reappeared around 1998-99, the story goes, in a kitchen table drawer (and proved shorter than memory had it: 33 minutes instead of 50-60). The last time some of these were screened in their original format (from dubs made especially for the occasion courtesy of the Munich Filmmuseum, which holds the original copies of Schroeter’s small-gauge works) seems to have been the International Short Film Festival Oberhausen in 1999, with a valiant Gerhard Ullmann at a Siemens projector and a bemused Schroeter in attendance, as always graciously answering questions after the screening. Schroeter may have thought little of his (still breathtaking) first steps, but he never tried to suppress them, as opposed to too many directors who try to “shape” their oeuvres and make themselves look like the natural-born geniuses they never were. (On a personal note, I think Schroeter was never ever really satisfied with his works: Once we talked about Regno di Napoli/Neapolitanische Geschwister [Kingdom of Naples, 1978], and almost the first thing he said was that the film always felt a bit like a mess for him as he hadn’t gotten the local specifics of the Neapolitan dialects.)

This period of autodidactic investigations into the medium’s potential climaxed with the cinematographic vanitas Eika Katappa, a collage of scenes from religious and mythological sources set to strains from operas and pop music alike, which made Schroeter world famous, even in the FRG whose film-cultural mainstream nevertheless always considered him something of a fringe benefit, truth be told. Few West Germans really knew what to do with him—it’s quite telling that the only works of his to get some standing in his native country are the two films with an obvious social relevance, Regno di Napoli and Palermo oder Wolfsburg (1979/80). That said, beginning with a production de scandal, Der Bomberpilot (1970)—three women’s ways through German history, from Hitler to the Adenauer era—a kind of precursor to Regno di Napoli done in a more cabaret-like way (including swinging Naziettes), it was West Germany’s public television which saw to it that Schroeter could work on a regular basis and without having to compromise. Those were the days when West German TV channels ARD, ZDF, and die Dritten (the local channels) still took their Bildungsauftrag (educational mission) seriously. It took till Regno di Napoli for a film of Schroeter’s to get commercial distribution in West German cinemas. (Some works of the ‘70s at least had non-commercial distribution, not that folks cared too much; festivals also did their bit, the International Film Festival Mannheim in particular, which was then still an important event). Things changed somewhat for the better during the ‘80s, with his films getting somewhat more exposure—which didn’t mean that critics and audiences began to understand him, just that they accepted his eminence. During the ‘90s and ‘00s, when the new cinéma de papá had no place for fine hearts and piercing minds or skeptical-cum-cantankerous aesthetes, Schroeter could only average a film roughly every half-decade. That he was always bigger in France is no surprise.

Regno di Napoli was the turning point in Schroeter’s development: His films up until then—peaking early on with Der Tod der Maria Malibran (The Death of Maria Malibran, 1971), Schroeter’s self-acknowledged zenith—are consciously stylized, theatrical, as rooted deeply in mainly Italian (late-)romantic opera, as they are in ‘60s underground theatre and cinema (think Jack Smith, Ronald Tavel, etc.). Starting with Regno di Napoli, a somewhat Brechtian, slightly Pasolinian epic chronicling 33 years of proletarian life in Naples—whores and mothers and sinners and capitalists and fascists and communists and death and life and workers and criminals and love and hate and revenge and grace and beauty and passion—his works grew additional roots in (neo)realism, culminating in his magnum opus, Palermo oder Wolfsburg, one of the best of a small handful of films that make the Berlinale’s Golden Bear an award worth aspiring to. Palermo oder Wolfsburg is Schroeter at his artistically most complex, all-embracing and all-encompassing—just marvel at the way the film begins on a quasi-early Viscontian note to end like Sirk at his most tempestuously mournful and Bene at his most sombre; it’s not a hybrid like Der lachende Stern (The Smiling Star, 1983), a work beyond categorization, more a weave or flow of different beauties that lie therein. With a meditation on choices and attitudes, positions political and aesthetic, it quite befits its subject: the Passion of the Sicilian migrant worker in the holy land of capitalism, West Germany at its most social democratic. Post-Palermo oder Wolfsburg, the films tend to be one thing each in an as-pointed-as-possible fashion: Schroeter’s paean to the dying Magdalena Montezuma (Der Rosenkönig [The Rose King], 1986), his tribute to the radiance of Isabelle Huppert (Deux, 2002), as well as his great literary adaptations-by-appropriation Das Liebeskonzil (The Council of Love, 1982, based on Oskar Panizza), Malina (1991, based on Ingeborg Bachmann) and Nuit de chien (2008, based on Juan Carlos Ornetti), all illuminations of radical cinetheatricality. His jestfully curious record of meetings with opera dive both old and young, Poussières d’amour/Abfallprodukte der Liebe (Love’s Debris, 1996), is imbued with the pathos of the real.

Towards his end, Schroeter received quite a few well-deserved awards that might have been of more use to him in earlier years, and even a tribute at the 2008 Viennale, but whatever. That his dying reinforced efforts all over the world to make his films accessible again, or, let’s be serious, shown at all in most cases, feels a bit strange: for now it’s the living who can bask in his glory. Also, that people seem to be more concerned about forthcoming Schroeter DVD editions than seeing his films—all of them—in as perfect as humanly possible conditions projected in cinemas, an essential part of this art, is slightly saddening: for Schroeter believed in the power of masses, the collective confrontation with an instant of beauty and enlightenment. But so be it. So be it. Schroeter always knew that all we’ll ever live with in the end are the remains.

Posted in Columns, CS43, From The Magazine