Olaf Moller/Columns, CS45, From The Magazine 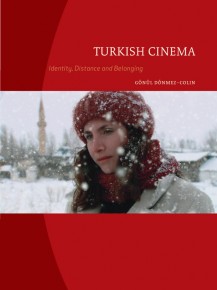 It was only a matter of time till a bunch of books on Turkish cinema would hit the stores; film-cultural fads work like that. To give things a more positive spin, what’s a passing fancy for many might be a life’s passion for a few who can now, in the tiny window of opportunity opened by hype, realize that one work they always dreamed about. And let’s face it, normally one wouldn’t get a book on Turkish cinema published too easily. (Next up: Romania—wait another two years and see…)

All that said, I’m very, very happy that there are finally a few tomes on Turkish cinema around. Chalk that up to my life and times: I grew up in a working-class neighbourhood of Cologne, which meant living alongside many migrant families, mostly from Turkey—Gastarbeiter, as they were (and sometimes still are) derogatively called. (Good thing that the presumed guests stayed, became residents, etc. and saved us from ourselves.) Anyway, Turkish neighbours and classmates also meant Turkish movies. Step 1: A schoolmate of mine and I watched unsubtitled videos at his family’s apartment (he translated, or at least tried, or probably only pretended to try and instead made up his own dialogue). The pleasures of Turkish entertainment! That unique cinegenie of Cüneyt Arkın and Kartal Tibet!! The soul-soothing absurdity of Çetin İnanç’s The Man Who Saves the World (1982)!!! Bliss. Step 2: Cologne’s now defunct cinematheque began to host the occasional season of Turkish films, the serious stuff above all: the master of masters, Yılmaz Güney. (I also fondly remember a screening of Police [1988], a coarse though smart comedy directed by Güney acolyte Şerif Gören, featuring Garib the parrot.) Step 3: Somewhere during the second half of the ‘90s, Turkish films slowly started to get distributed on a regular basis in German cinemas. An audience of millions wanted to be entertained; a now also defunct Cologne downtown multiplex had one or two screens reserved exclusively for Turkish films, usually subtitled, which allowed me to closely follow the careers of, say, Yavuz Turgul (The Bandit, 1996), Sinan Çetin (Propaganda, 1999), Yılmaz Erdoğan (Vizontele, 2001), and Serdar Akar (Valley of the Wolves—Iraq, 2005).

None of these names probably means much to most readers, as they’re key directors of post-Yeşilçam commercial cinema, the kind of stuff that usually doesn’t make the international festival rounds. Sad to say that neither Gönül Dönmez-Colin’s Turkish Cinema: Identity, Distance and Belonging (London: Reaktion Books, 2008) nor Asuman Suner’s New Turkish Cinema: Belonging, Identity and Memory (New York: I.B. Tauris, 2010) is going to change that, even if both try to incorporate them into their essentially art-house-focused-and-driven arguments. Dönmez-Colin’s work might at least entice a few curious souls to start looking for such titles as Akar’s ultra-ambivalent gems On Board (1998) and In the Bar (2006) or Sırrı Süreyya Önder and Muharrem Gülmez’s weird International (2006), while Suner’s book likely won’t lead to pressing demand to see Akar’s Offside (2006) or Çağan Irmak’s My Father and My Son (2005), despite some serious supportive phrases.

As the books’ sub-headings suggest, both are covering more or less the same ground vis-à-vis names and titles: there’s plenty on Nuri Bilge Ceylan, Zeki Demirkubuz, Yeşim Ustaoğlu, and Derviş Zaim, the four low-budget pioneers turned main auteurs of contemporary Turkish art-house cinema; home, migration, and exile in general are discussed, as well as the Deutschländer/Alamancı cinemas in particular; the Kurdish, Greek, and Armenian “questions” are addressed (the latter barely, as there are so few films even acknowledging the existence of Armenians); and then, of course, women and gender. Sorry to sound a bit dismissive but, really, these are the same themes that everybody and his/her/its grandmother routinely fills pages with, which begs the question of whether the books would have appeared at all if they strayed too far outside this familiar turf.

That said, Turkish cinema does invite these kinds of discussions—though what’s more puzzling is that Dönmez-Colin and Suner at times even have the same blind spots. (Let’s only note that neither of them thinks the blatant anti-Semitism of Akar’s Valley of the Wolves is worth considering in depth.) Turkish Cinema: Identity, Distance and Belonging proved to be the more enjoyable and enlightening read, which, to be honest, I didn’t expect, as I’m not exactly a fan of Dönmez-Colin: she always seemed too much the professional engagée to me. Whenever I read her texts I have the distinct impression that she’s supportive of (something that’s incidentally) a film because she thinks it’s good for us; here for once it feels as if she’s talking about carefully selected films that she likes. So even if the themes dealt with and arguments made are fairly generic, it’s still engaging, educational, and at times even fun to follow them through with her. Admittedly, her book has a major advantage over Suner’s: its scope. Dönmez-Colin discusses Turkish cinema in general (even if the last two-plus decades are the centre of her attention), which means that older masters like the venerable Atıf Yılmaz (Oh, Beautiful Istanbul, 1966), the great Ömer Kavur (Istanbul, 1981), or the ever-excellent Erden Kıral (A Season in Hakkari, 1983) are discussed a bit more extensively, while the likes of Lütfi Ömer Akad (Strike the Whore, 1949) and Metin Erksan (Dry Summer, 1963) at least get their due. Best of all, Dönmez-Colin devotes a whole chapter to Yılmaz Güney, and justifiably so considering his ongoing influence on younger directors, above all Ustaoğlu, as well as his pivotal importance for any discussion of Kurdish cinema. The importance of Turkish Cinema: Identity, Distance and Belonging lies in just that: Dönmez-Colin lays out convincingly how today’s Turkish cinema is connected to its past (even if at one point she wonders whether this isn’t a passé way of thinking). In a film-cultural climate where these kinds of developments seem to count less and less, this is an important argument to insist on.

While Dönmez-Colin from time to time references this historian-theorist or that essayist-philosopher, Suner does little else but in New Turkish Cinema: Belonging, Identity and Memory. At least it feels like that. In the first chapters of this very academic read, Suner barely talks about the films as films, i.e., rarely describes an image, analyzes its components, or tries to understand what they mean. Instead, it’s content, content, symbol, content, historic backgrounds of the stories, some more content, and lots of digression-heavy references to all kinds of thinkers old and new; this is useful, of course, but leaves one wanting. Things get a bit more detailed in the chapters devoted to Ceylan and Demirkubuz, but not more interesting: Ceylan is all about home and paradox, Demirkubuz vexingly opaque. Yawn. And then, suddenly, there are a few pages of interest, and they’re devoted to two works by…Fatih Akın, of all people. Yet, what Suner has to say about the music in Head-On (2003) and Crossing the Bridge: The Sound of Istanbul (2005) is worth reading and pondering. Beyond that, the book has little more to offer than the ordinary emptiness of a culture more interested in its own rituals and mores than the subjects they use to express these with—even if one does learn quite a few things.

Let’s recommend, in closing, the Senem Aytaç and Gözde Onaram-edited Young Turkish Cinema (Istanbul: altyazi, 2009). This slim, pleasantly done booklet was published to accompany a program of (mainly) debuts and sophomore efforts presented in Rotterdam at the IFFR and Linz at the Crossing Europe festival; it offers some crisp, well-informed, always personal, often partisan journalistic writing on films that don’t always warrant such generous treatment.

Posted in Columns, CS45, From The Magazine