Mark Peranson/Columns, CS69, From The Magazine 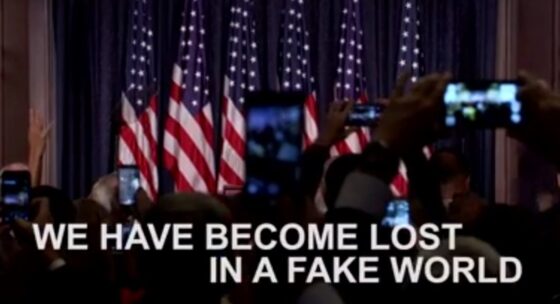 We interrupt our regularly scheduled depressed editor’s note to instead speak from a place of anger-tinged despondency. Usually at this late point in the editorial schedule I’m wracking my brain to think of something interesting to say, and would likely complain about the lack of interest in the unprecedented reviews of 190+ TIFF films we ran online at cinema-scope.com to start. (Please read them, we are darned proud of our efforts.) But what has transpired since the last issue was published and posted means this time around I’m having trouble concentrating on cinema, and don’t exactly know how to start. Though I frankly don’t want to go there, I’m compelled to address the slimy current reality—the shock still hasn’t worn off, and maybe it’ll help with my recurring headaches.

Thinking back to the days of the film festival, it truly was an easier time, when it was tolerable to make fun of one Donald J. Trump, a man whose wig bill could pay for our publication in perpetuity, as witnessed by the Twitter phenomenon that was Arthouse Trump (himself a Cinema Scope subscriber). But the soon-unmasked hardcore Clinton supporter David Johnson understandably stopped his tweets, while the liar-in-chief’s repulsive reality-show online shitstorm blathers on…Sad! For anyone who doubts the interrelationship between politics and an engaged form of the arts—that this is a Canadian magazine is irrelevant, as Trumpism is becoming a worldwide phenomenon—I would say imagine what this issue would have looked like had a couple of hundred thousand Midwesterners voted another way. Though Ken Jacobs’ now-timely reflection on his Reichstag 9/11 was already in the pipeline before November (same with the likeminded Cristi Puiu), in this alternate reality there would certainly be no contribution herein from New York Mets fan Roberto Minervini, whose film The Other Side—its cover image here is pretty symbolic—suddenly has become mandatory viewing.

The real winner of the election, when it comes to the film world, comes in a work which I decided not to delve into deeply in these pages, from a filmmaker we have featured often, because you can all find it yourselves online and watch it rather easily: Adam Curtis’ pre-election BBC tele-essay HyperNormalisation. In typically problematic yet entirely compelling, doom-laden fashion, Curtis situates the initial rise of Trump, his current-day appeal—thanks in no small part to Curtis’ pet bugaboo, the self-confirming bias of social media (certainly abetted by “fake news”)—and even the Trumpistas’ continued strategy of anarchic, perceptual distraction, taking after another master of the dark arts, Russian political advisor Vladislav Surkov. Recommended viewing with your racist uncles this holiday season.

With a bit more publicity, Curtis’ film could easily have entered all those Best of 2016 lists, which other magazines have, as usual, prematurely vomited out before the end of this year. And this time, I can’t blame them, because, as we all can agree, 2016 has been one hell of a disheartening year. You’ll have to wait until our next issue for the inevitable naming of Maren Ade’s Toni Erdmann as the film of the year, which events have recast as a plea for tolerance and generational reconciliation, and which might be even more necessary as hate continues to surface and proliferate. (One can only imagine the popular response in North America when Toni Erdmann is actually released into cinemas on the eve of the inauguration.) Yet we’re prolonging 2016 until the actual end of this annus miserablis because (a) facts still matter and (b) even in the darkest of times you’ve got to have a little bit of hope. At any rate, I’ll be spending the last two weeks of the year on a desert island with no internet.

Posted in Columns, CS69, From The Magazine