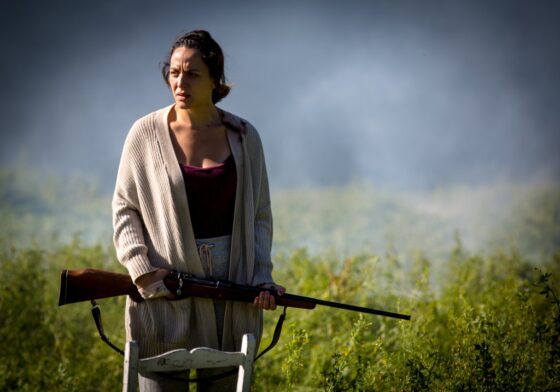 It’s an epidemic: the populist appeal of genre cinema is undeniable, even here at home. In a bit of a surprise, Robin Aubert’s Les affamés won Best Canadian Feature at the 2017 Toronto International Film Festival, and then the Temps Ø People’s Choice Award at the Festival du nouveau cinéma in Montréal. Months later, following a solid global festival run, the film landed a spot in TIFF’s Canada’s Top Ten. It appears, then, that a film best described in press kit-speak as an “arthouse horror-thriller” is the ideal token we can put forward as our national cinematic brand. That the film is in French only bolsters its case, distancing it from the notions of Americanness its living-dead premise evokes. Netflix, for one, has bought a lot more than the hype, snagging the flick for international release in a punchy acquisition reflecting the streaming giant’s commitment to increase its spend on Canadian content over a five-year period.

The anointment of Aubert’s fifth feature after a series of well-received but relatively obscure efforts surely signifies something. In the context of the “New Weird Nova Scotia” represented by Ashley McKenzie’s Werewolf (2016) and a cluster of skilled young storytellers emerging out of British Columbia and Ontario (Josh Cabrita exhumed both CanCon phenomena in Cinema Scope 71 and 72, respectively), it’s worth pondering what it means that a seemingly straightforward genre exercise has been so elevated within our national cinema. But perhaps what Aubert has put together is a singular Canadian cultural examination in a horror film’s dress.

The director is no stranger to genre. Saints-Martyrs-des-Damnés (2005) was a surrealist horror-thriller following a tabloid reporter’s uncanny visit to a small Québécois village, yielding a chaotic smorgasbord of characters and events; with Les affamés, Aubert returns to his hometown of Ham-Nord, banking once again on an intimate knowledge of regional specificities. This time, he moves outward from the one-to-one case studies of Saints-Martyrs’ local eccentrics, fixing his gaze more on group identity and social order in service of a microcosmic cultural study. Shifting his focus from the damned to “the ravenous” (the film’s English-language title), Aubert puts the cultural conditions of both the zombie constituent and the remaining survivors under the microscope. While the living contend with mortal fear, frustration, and paranoia in strategizing and scrambling for survival, the animated dead duly orchestrate terror and destruction, exhibiting a preoccupation with the living that seems to expand beyond basic bloodlust.

The anthropological conceit is compelling: in an otherwise diligently referential work that looks the part of a 21st-century zombie flick à la Boyle or Snyder, it’s the only notable liberty the film dares beyond its generic casings. Aubert’s living tote their respective petits drames alongside their escape packs (and one very conspicuous accordion), inexorably (if pointlessly) preoccupied with the trappings and personal failings of their pre-apocalyptic lives. Marc-André Grondin heads the pack as the boneheaded Bonin, a bumbling man-child turned hero, eventually accompanied by the exceedingly nervous Tania (a sharp Monia Choukri); they’re complemented by Brigitte Poupart as the unravelling businesswoman Céline and Charlotte St-Martin as Zoe, a resilient young girl of ten. As Aubert’s characters come to terms with new iterations of life under duress, class and lifestyle conflicts in tow, the film studies the fascinating emergent networks of morality and sentimentality among them which cut through the monotony of genre: newly appointed bedfellows Tania and Bonin awkwardly stumble through hellacious courtship tensions, with Tania eventually reaching her boiling point over her partner’s commitment to cornball antics at the end of the world. Elsewhere, two elderly women who join the survivors’ army take a moment to marvel at their domestic skills as they decide which jars of their homemade pickled goods to take with them on the run. The tender, humanistic focus delineates the action from run-of-the-mill Romero rehash: even amidst its faithfully rendered gore and copious jump scares, the film is committed to behavioural realism.

Les affamés is at times sharply (if darkly) comic, and its characters’ conduct dizzyingly ordinary despite extraordinary circumstances. The relationship between Bonin and his pal Vézina (Didier Lucien) at the film’s open is a jolting indicator of these tonally shifting conditions. The two exhibit the fervent rapport of teenage delinquents hunting stray rodents for target practice, but moments into their Wild West pantomime, they realize the progression of the zombie epidemic is much worse than they imagined: in an eerie, off-speed sequence, Vézina is bitten, leading to an emotionally affecting exchange in the back of Bonin’s pickup truck. Together, the two friends lament lost opportunities to share their true feelings with family, friends, and secret objects of affection—complete with one last healthy dose of fraternal razzing—while Vézina lays dying.

The anguish doesn’t end there: facing the reality of the impending reanimation of his slain friend’s body, Bonin tasks another survivor with the pre-emptive violent maiming of Vézina’s corpse. It’s a harsh go, one that Bonin bears with reactive fidelity (at least for the moment before the next crisis demands his attention) and one that his other living companions will endure later as well. The changing conditions of morality are on display as the living juggle competing human instincts in the face of mortal danger, and Aubert offers a close examination of the psychological disavowals necessary to follow through with hostile actions carried out in the name of safety and sovereignty.

The script’s nuance extends to its interpretation of the living dead. In a further departure from convention, Aubert gives the zombies a rich culture and community of their own. In the downtime punctuating new member-recruitment drives, “the ravenous” exhibit a strange preoccupation with the artifacts and worship rituals of the living, actively crafting a towering altar of chairs and observing their handiwork in a trancelike state. The makeshift structure embodies an empty monument to materiality at the point when it’s clear to both Aubert’s characters and his audience that content of character is king.

The small-town setting is undoubtedly atmospheric, but it holds thematic weight too. Aubert relocates typical horror tropes to an idyllic natural setting where naturalism is inextricably tied to notions of home, origin, and family. Ruralism and contention with the natural world are typically the result of urban displacement in apocalyptic scenarios, but the fact that the rural environment is lived-in, familiar terrain for all involved raises the stakes: the neighbourly familiarity that informs many of their interactions is a fact of small-town Canadian life, and the characters’ command of the space thrills with the pacing of a primetime Western. The apocalyptic condition plays here as a perversion of natural order, the unsettling power of the uncanny especially vivid amidst the garishness of the greenery.

Les affamés’ spry invocation of frontier politics proposes critical considerations of sovereignty discourse, land-title defence, and cultural dominance. The setting is powerfully allusive in the wake of Québécois separatist social politics, rendering cultural epidemiological concerns physically visceral. The wood-panelled, brass-knobbed homes acutely convey notions of the familial and the domestic in a near-literal conjuring of in-our-backyard invasion rhetoric. Interestingly, Aubert complicates decidedly white Québécois sovereignty narratives with the conspicuous early inclusion of the endearing and exceedingly virtuous protagonist Vézina, who is black. As is somewhat humorously custom to the genre, he’s the first to perish with a legacy dangling somewhere between canary in the coal mine and Magical Negro. The narrative decision is a brilliant indicator of generic reference, but those privy to the xenophobic state-sanctioned violence and Indigenous erasure tacitly attendant to sovereigntist rhetoric may rightly wonder: in this white Québécois nationalist milieu, what does it mean, here, when the black guy dies first?

For diligent viewers who watch through until the end of the credits, Aubert hides a colourful surprise: his camera surveys the towering altar of chairs once again, but this time trains in slowly on a parrot, anomalously and haphazardly perched on a top rail. The bird’s aesthetic excess seems absurd and even vain amidst the contextual ruins, a heavy-handed extension of Aubert’s commentary on excess and materiality. That Aubert tucks his showy imagery at the very end of the film’s runtime, long after the expected exodus of viewers, is perhaps an invocation of another classically Canadian characteristic: bashful pride. Multiple national honours later, and still: c’est la vie.

Posted in Canadiana, Columns, CS74, From The Magazine