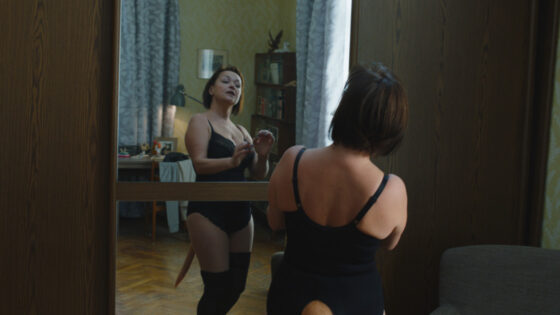 Kids engage in erotic asphyxiation. Students with special needs gang-rape a girl in a wheelchair. A lonely, middle-aged woman suddenly sprouts a tail. These are, respectively, synopses for the short documentary Space Dog (2013), the first feature Corrections Class (2014), and now Zoology (2016) by Ivan Tverdovsky, a 27-year-old rising star of Russian cinema––a designation that, frankly, speaks volumes about the dire situation in his home country’s film industry. Zoology is now on its way to TIFF, fresh off its victories at the local Kinotavr (Prize of the Russian guild of film scholars and film critics, where it won Best Actress) and Karlovy Vary (Special Jury Prize), and later bound for San Sebastian, which makes yet another strong case for how generously and indiscriminately festival recognition is lavished upon sensationalist exploitation.

Let’s go back to the tail for a minute, though. Its existence is both the movie’s sole raison d’être and the only drop of fuel in its narrative tank. Tverdovsky wrote the screenplay himself and relied heavily on improvisation on the set, so poor Natasha (Natalia Pavlenkova), a mutation-afflicted zoo employee still living with her mom, routinely checks off all the boxes in her author’s imagination, much like she would at a scheduled physical (please don’t mention David Cronenberg in your reviews: Tverdovsky seemed perfectly sincere when he wondered who the guy was in a recent interview). What will the passers-by say? Her colleagues? Her mom? The X-ray specialist she goes to see? Obviously, they won’t be happy, because principled unhappiness undergirds Tverdovsky’s creative M.O. and pseudo-misanthropic philosophy alike.

The one idea here sounds like the same old song: Russian people hate the Other and are incapable of tolerating any kind of difference, so Natasha’s life will turn into a living hell. The zoo staff will bully her, as though recreating some deleted scenes from Corrections Class; her devout mother will exorcise the demons by plastering their apartment walls with Orthodox icons. And yet, the young doctor will, all of a sudden, start flirting with Natasha, initiating an unlikely love story and thus promising the heroine a change of fortune. I would be remiss not to point out that theatre actress Pavlenkova, in her first leading role, gives it her all. By and large, her acting is Zoology’s sole redeeming point, which makes it all the more distasteful that all the plot developments, and the tentative love story in particular, are put in the service of the final twist: of course, the kindly doctor is no better than the rest, and all he wanted to do all along was to suck on Natasha’s tail.