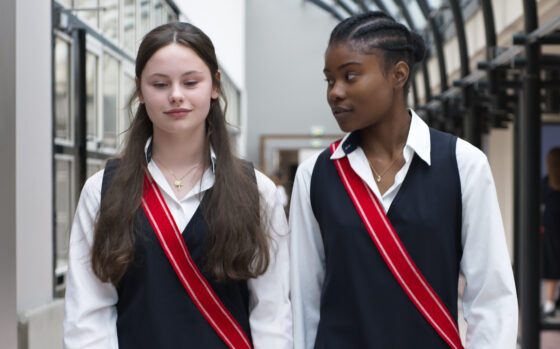 Bertrand Bonello’s eighth feature, among his best and most daring, furthers his recent interest in the youth of contemporary France and the imprint of the country’s political history on the modern world. Set alternately in 1962 Haiti and present-day Paris, Zombi Child moves nimbly between periods in its simultaneous telling of the story of a Haitian man (Mackenson Bijou) brought back to life from the brink of death, and that of a group of students at an elite school for young girls. Based on the legend of Clairvius Narcisse, a man who, in the early ’60s was said to have been drugged and buried alive only to be resurrected to work on a sugar plantation, the Haiti story immediately situates the film in a certain tradition of genre cinema, only here the very notion of zombies has been traced back to its roots in voodoo. (The word zombi, spelled without an “e,” comes from the original Creole, indicating not a manifestation of the living dead but rather a person who exists somewhere between life and death.) The modern-day story, meanwhile, is set within the halls of the Légion d’honneur, a still extant boarding school and relic from the Napoleonic age reserved for female descendants of Legion of Honour laureates. Almost exclusively white and European, the student body personifies a lineage of French nobility with complicated ties to colonialism and slavery.

Needless to say, Zombi Child navigates a minefield of thorny issues. But rather than sidestep these subjects, Bonello—who also wrote the screenplay and, as always, composed the cooly evocative score—instead confronts them through a series of audacious conceptual gambits. The Clairvius story, shot on location in Haiti with a combination of local actors and non-professionals, takes on an almost ethnographic quality in the early going through the detailed depiction of ritual burial and voodoo traditions. Later, while observing the resurrected Clairvius in a series of scenes that nod to Jacques Tourneur’s I Walked With a Zombie (1943), Bonello achieves an uncanny state of suspended tension, accentuated by day-for-night photography and ominously unpopulated views of the Haitian landscape. In the present day, Clairvius’ granddaughter Mélissa (Wislanda Louimat), a Haitian native orphaned by the 2010 earthquake, arrives in Paris as a new student at the Légion d’honneur. Intrigued, a group of girls led by the lovesick Fanny (Louise Labèque) recruit Mélissa for their secret sorority. As they get to know each other, and Mélissa slowly begins to reveal more and more about her heritage, the girls are at first fascinated with their new classmate’s apparent powers, but soon grow uneasy as she begins to act out in strange ways, at one point even retreating to the restroom in a fit of guttural shrieks. Undeterred and hoping to alleviate her boy troubles, Fanny seeks out Mélissa’s aunt (Katiana Milfort), a practicing mambo, or voodoo priestess, thus setting the table for a volatile collision of cultures. Along the way, crosscutting briskly between eras, Bonello sets up an array of contrasts between black and white, past and present, life and death, rural and urban, creating a provocative dialectic that suggests that the colonialist spirit never truly faded, but only assumed new forms.