Youth in Reboot: Scott Pilgrim vs. The World 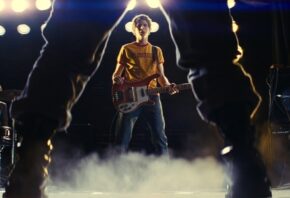 Hollywood youth comedy—that genre made for youths featuring youths—once the dream factory of a new wave of bright young things who were supposed to transform that end of the business over a decade ago, now resembles a stuffed doll mangled and torn to shreds by mangy dogs. Before the August arrival of Edgar Wright’s Scott Pilgrim vs. The World, the last youth comedy with any resonance was The House Bunny (2008)— entirely due to the genius of Anna Faris, the funniest actor under 40 years old anywhere on the planet—and even before that, the record remains slim. Yet with one stroke, Scott Pilgrim rewrites the rules, parameters, and standards for the genre, gamely condensing Canadian graphic novelist Bryan Lee O’Malley’s 1000-page, six-part epic and fusing it with fabulously propulsive visual language and comic dialogue that whips by faster and funnier than anything from a Hollywood studio since the heyday of Billy Wilder and I.A.L. Diamond.

So, yes, Scott Pilgrim is probably the most crucial English-language movie most people chose to ignore in 2010—a curious irony given the borderline-insane passion of O’Malley’s fan base, who were not only primed for the film but linked up to the Adult Swim series Scott Pilgrim vs. The Animation, Ubisoft Montreal’s tie-in video game and the comic book version adapted for mobile device download. Moreover, Scott had the imprimatur and marketing clout of Universal Pictures, which not only greenlit a redesign of its global logo at the start of the film into a super-pixilated video-game version, but also a reprise of its logo theme song (imprinted onto the brain pans of a generation of TIFF filmgoers thanks to the unbearable volunteer trailer) during the arrival of one of Scott’s many arch-nemeses. Scott penetrated everywhere, yet in the end relatively few noticed.

It may be that the very aspects which O’Malley’s fans demanded and the crowds at ComiCon feverishly applauded on first viewing, particularly those that countered Hollywood youth-comedy convention—including a radical application of graphics and a place of honour for gay characters such as Scott’s all-too-wise roomie Wallace Wells (Kieran Culkin)—were those that doomed it with a general audience during the late-summer season. No recent product of the contemporary Hollywood studio system (with the exception of True Grit) has managed to better retain the flavour, attitude, and spirit of its original source material—particularly notable considering that its source, imbued with specifically Canadian youth ennui and the culture of Toronto indie rock, is so distant from any kind of Hollywood sensibility—while energetically questioning the fundamentals of conventional visual syntax, ambitiously integrating the (inherently cinematic) essences of graphic novel visual style into a cinema of comic-phantasmagoric imagination by way of Westernized wuxia and manga.

Which is to say that Scott kicks major ass. Though something of a no-brainer, the casting of (the Toronto-bred) Michael Cera as the unemployed, 23-year-old indie bass rocker hero is Wright’s masterstroke. Ever since Juno (2007), Cera has consciously traded in a persona that combines a physicality on the apparent verge of collapse from sheer, spindly weakness with a mesmerizing, almost unnerving inner peace that sets him utterly apart from any other actor of his age group. By the time of Youth in Revolt (2009), Cera appeared to be at a crossroads, where he would either reinvent himself or submit to perpetual imprisonment in the type he had so assiduously cultivated.

This proves now not to be the case, since Cera not only remains Cera in Scott Pilgrim, but maybe even more so: Cera Squared, perhaps. From his nervously hesitant high-pitched voice just ever… so… carefully… creeping… along… to… a… final point, to a now more angular face that wipes away most of his boyhood features, to a body that’s nearly as rubbery as Shelly Duvall’s Olive Oyl in Robert Altman’s Popeye (1980) but conceals an unexpected strength— as seen when Scott suddenly unleashes some wuxia moves as he goes into battle with “The League of Evil Exes”—Cera is the ideal embodiment of Scott, a little more grown up from Youth in Revolt’s hapless Nick Twisp but with the painful awkwardness of adolescence still an uncomfortably fresh memory.

About that League: it all begins when Scott, until that point perfectly content with the puppy-dog affections of platonic Chinese-Canadian gal-pal Knives Chau (Ellen Wong), longingly eyes American-in-exile Ramona Flowers (Mary Elizabeth Winstead)—already famed in Scott’s tight circle of young Torontonians for being so far out of his league that he may as well be playing for the Winnipeg Blue Bombers against the Calgary Stampeders—in a library the day after dreaming about her. Despite his outwardly nerdy appearance and a klutzy first impression, Scott proves quite capable in his own gangly way, and he soon manages to win Ramona over—although he handles his dumping of Knives with a certain lack of panache. (In a witty bit of visual invention, Wright places Cera against a pure black background as he meekly tells Knives they’re through, and then has him slink off screen like a Warner Bros. cartoon character.)

However, Ramona then informs him that in order to ensure an unfettered relationship with her, he must battle a super-powered septet of her past amours: Matthew Patel (Satya Bhabha), able to conjure up dancing demon chicks; Chris Evans’ action superstar Lucas Lee (first viewed in an ad on the back of EYE Weekly), in town to shoot a movie wherein Toronto stands in for New York (a neat inverse of Scott Pilgrim’s Toronto-specificity); Todd Ingram (Brandon Routh), arrogant vegan and ruthless bassist for a hot band fronted by Scott’s own evil ex, Envy (Brie Larson); raging Roxy Richter (Mae Whitman), who’s not over her lesbian affair with the once bi-curious Ramona; Keita Saitou and Shota Saito’s wannabe guitar gods the Katayanagi Twins (“Ramona dated twins?”); and last but not least, the insidious record and club tycoon Gideon Graves, played with lip-smacking relish by Jason Schwartzman.

Even more so than in the graphic novels, Wright suggests that nearly everything we’re seeing is in Scott’s head, and the frenzy of action he orchestrates has all the qualities of a sustained dream-nightmare—an infinitely more expressive visualization of a young man’s emotional eruptions and fears than Enter the Void’s incessantly hovering POV. And because this is from the director of Hot Fuzz (2007) and Shaun of the Dead (2004), those fears are infused with a sharp sense of humour that has a sly element of worm-turning nationalist triumph, as Scott represents Canada against a string of incorrigible Yankee assholes. (New Yorker Ramona has fled to Toronto to escape all her former crazy lovers, thus transforming Canada—as happened during the draft-dodging Vietnam era—into that land of personal reinvention which the US once made exclusive claim.)

The telling final detail of each of Scott’s successive victories over his seemingly unvanquishable foes is their reduction to a tinkling rain of coins (O’Malley’s idea, not Wright’s, but deliciously rendered)—as if America might in the end be reduced to nothing but money, which buys you rounds at the local arcade. Could the year’s most deliriously entertaining movie actually be a declaration of war by the Great White North on its southern neighbour? Perhaps. But in the end, American Ramona does walk hand in hand with Canadian Scott through a time portal toward points unknown. Hands across the border, after all.