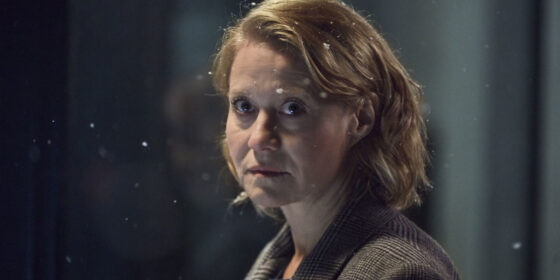 A film just obvious and tiresome enough to be a minor hit, You Disappear is the sort of literary adaptation that gives prestige a bad name. Taken from a novel by Christian Jungerson, You Disappear is the sort of film that recites large passages of the book in voiceover, just in case anyone in the cheap seats might be missing the philosophical subtext to the onscreen plot. That plot is relatively simple: school principal Frederik (Nikolaj Lie Kass) is on trial for embezzling a huge sum from the workplace. But it’s discovered that he had a large tumor on his frontal lobe at the time of the crime. Frederik, along with his lawyer (Michael Nykvist) and his wife Mia (Trine Dyrholm), are placing their faith in the neurologist’s diagnosis: that the tumor could have severely compromised Frederik’s impulse control and, in fact, altered his personality.

Throughout the film, we hear Mia going on and on about how we are networks of synapses and chemical reactions, that free will is primarily the brain’s response to stimuli within habitual schema, etc.; she even attends a support group for partners of brain trauma victims, where they read such material as a form of comfort. But director Peter Schønau Fog moves pedantically through You Disappear assuming his audience has never once considered these basic human questions. It’s a film that spends most of its running time explicating itself, mostly as a way to keep us from noticing that Nicholas Ray covered this ground, with much higher emotional stakes, in Bigger Than Life. In fact, what You Disappear offers by way of originality is a smug, borderline-misogynist final-reel twist.