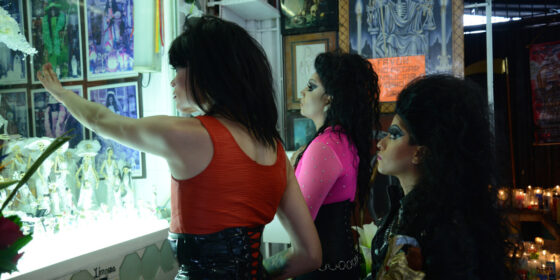 The sinister shadow of Iñárritu hangs over Juan Andrés Arango’s tripartite character study, which doesn’t explicitly interconnect its stories Babel-style but nevertheless seems similarly intended as a commentary on universal issues of displacement and alienation (sans international movie stars, of course; this is a Canadian co-production after all). As such, it’s pretty heavy-handed stuff, introducing a trio of young characters nursing abandonment issues—a Mexican labourer (Bernardo Garnica Cruz), a Colombian fisherman (Jonathan Diaz Angulo), and a Filipino student relocated from Manila to Montreal (Jembie Almazan)—and forcing them into narratives entirely defined by violent contrivance. It’s a fine line between depicting poverty and socioeconomic inequality and exoticizing and/or exploiting it for a North American audience, and Arango’s film ticks off a slew of transnational art-house tropes: strobe-lit forays into nightclubs; pandering scenes of faux-austere violence; bobbing, quasi-Dardenne handheld shots from behind people’s heads; telegraphed moments of redemption at the end of downward-trending character arcs. The actors work their respective ways through the wringer of the script with aplomb—Almazan is excellent as a young woman mysteriously driven to rebel on subcultural terms that are clearly not her own—and Nicolas Canniccioni’s cinematography gleams and glints expressively. But X Quinientos is finally so schematic that its craftsmanship comes to feel like an airless enclosure for notions about loneliness and belonging that could really have used some breathing room.