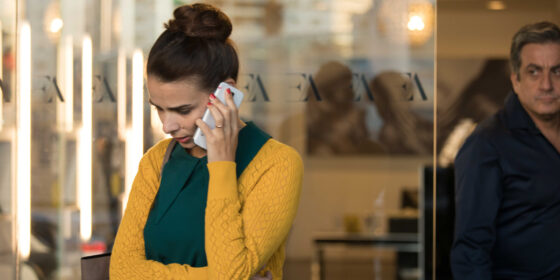 Much like its protagonist, Michal Aviad’s Working Woman appears to be in control until things get more complicated. Although Orna (Liron Ben Shlush) takes to real estate like a duck to water, her confidence is progressively undermined by her manipulative, lecherous boss Benny (Menashe Noy), just as the film’s own sense of poise and deliberately narrow focus become shakier and shakier the more conflicts they are forced to encompass.

With three children and a husband trying to get his restaurant off the ground, Orna is finding it hard to make ends meet, which is why she’s so pleased when luxury housing developer Benny offers her a job as his assistant, despite the apparent lack of fixed working hours and pay and the occasional inappropriate comment about her appearance. As it happens, Benny is as eager to shower Orna’s obvious competence with greater responsibility, promotion, and lavish-sounding bonuses as he is to express his attraction to her, resulting in a queasy carrot-and-stick dynamic that only escalates further after Orna tries to extricate herself from it.

Given how seldom the specificities of female work are seen in cinema, it’s striking to see Aviad restrict almost the entire first act of the film to professional questions, with even Orna’s interactions with her family largely revolving around the opportunities and demands of her new job. For a time, at least, this approach pays dividends, adding briskness to the plot and setting up Orna’s predicament with suitable plausibility. Yet the lack of additional psychological shading begins to shine through as the emotional ramifications of her situation pile up, with certain actions and conversations feeling forced where they once felt agreeably tossed off, while the same handheld camerawork used throughout also fails to evolve along with the rising tension. And if this working woman does ultimately find a way through the tangle of work, family, self-imposed pressure, and male aggression, the same can’t quite be said for the film: juggling so many variables never comes easy, no matter how worthwhile the task.