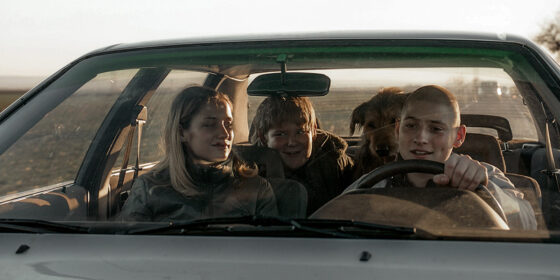 The only truly pressing question that comes to mind when watching Olmo Omerzu’s Winter Flies is who exactly such a film is supposed to be targeting, as its competent, strangely listless blend of genres fails to extract much urgency or specificity from any of them. Does making yet another coming-of-age road-movie comedy that, this time, happens to be set in Central Europe represent anything like a unique selling point?

The podgy Hedus (Jan Frantisek Uher) is out with his BB gun in full camouflage when he catches sight of his friend Mara (Toma Mrvík) driving a stolen car. The two adolescents subsequently set off together without a fixed destination, although their misadventures have barely begun when Mara is suddenly at a police station some time later, explaining to the officers there what happened, albeit without mention of Hedus. The film then proceeds to skip back and forth between the interrogation room and the duo’s drive across a wintry Czech Republic, with the slight discrepancies between the two accounts and the mystery surrounding where Hedus ended up presumably supposed to supply tension. A pretty girl is picked up, a dog is rescued from a lake, and Mara’s grandfather is rushed to hospital, as the mood continually zig-zags between the comic and the melancholy.

While the handsome shots of the passing landscape and the occasional scenes that bring objects to the fore—including the (metaphorical) flies of the title—do exude a more subtle wistfulness, such moments are fighting a losing battle against the plot, which recycles the most predictable beats, encounters, and sources of comedy from each of the three genres it seeks to reproduce. If Winter Flies could thus effectively take place anywhere, one can only hope that the repeated, wannabe-macho mentions of female genitalia and coy handling of homoeroticism are not supposed to be its regionally specific components. Adventures are more diverting when boys don’t always need to be boys.